The Minister of Finance, Christos Staikouras, spoke about the Greek State's participation, with a 21% share, in the relaunch ELVO 2020.

He stated that: "The agreement was signed today [yesterday] between the Greek State, represented by the Minister of Finance, and the bidder of the tender, regarding the right of the Greek State to participate with 21% capital of the new company "ELVO 2020"."

It is recalled that two public tenders were held, without result, one in April 2017 and one in August 2018, and a tender, with free trading, which was canceled in February 2019.

In March 2020, the Liquidator again proceeded with a public invitation to conduct the tender, with free trading. Through this process, the said bidder emerged.

After six years of regression and inefficient procedures, ELVO can now be a lever of growth for the Greek economy, especially in Northern Greece, supporting the local community by creating many jobs.

"The Greek Government continues to work, with method, determination and efficiency, for the reconstruction, on a sound basis, of the structures of the defense industry," he said. 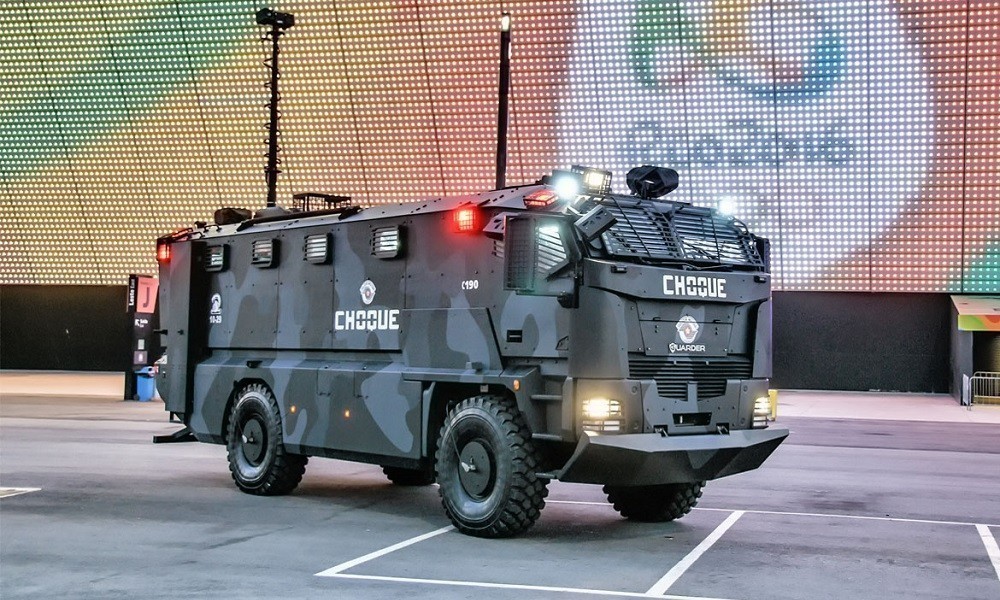 Who is the new owner?

CEOs Samy Katsav (SK Group) and Dani Ziv (Plasan) will control up to 79% of the new ELVO.

Greek businessman Aristides Glinis will most likely be the head of the company and once the proposal is approved, investors will set up the new company within 3 months.

A major goal of Israeli businessmen is to obtain a European and NATO 'passport' for their products so that they can be exported more successfully to the international market.

The vehicles that will be manufactured by the new ELVO are military vehicles, special type vehicles and civilian vehicles. However, other products may be included such as vehicle shielding systems and electro-optical equipment.

The Guarder is an armored bus for police forces, which is based on the the German MAN SE (4X4) with a capacity of 25 men.

The SandCat is an armored vehicle with a capacity for four or five people based on the American Ford F-350 and F-550 civilian trucks.

The vehicles are armored with composite armor that combines layers of metal, plastic and ceramic material, as well as air gaps.

The largest client seems to be the Mexican police with 125 units, followed by Kazakhstan, Colombia and Nigeria with 25-30 units each.

The specific vehicles can be used by the Greek Police but also by the Greek Army, especially now that the replacement of 10,000 Mercedes and Steyr vehicles has been announced.

ELVO was founded in 1976 as Steyr Hellas SA to produce and supply goods vehicles, agricultural tractors and stationary engines. The products were assembled with small Greek participation that was gradually increasing.

In 1986 the Austrian Steyr left and its share was taken over by the Greek State.

Since then the company was named ELVO.

In 2014 ELVO went into liquidation.

The assets claimed by the consortium are three plots of land with an area of ​​over 270,000 sq.m. in the Industrial Area of ​​Sindos, building facilities in the Sindos Industrial Zone, equipment and intellectual and industrial property rights.

This includes the trademark and distinctive title "ELVO", and any other industrial and intellectual property rights, such as know-how, designs, IT licenses and patents if the company secures it.

The first Greek drone that the Turks are trembling over is almost ready!

Pension increase in 2023 will be much higher than initial estimates

Greek super drone dreaded by Turks to be ready in July