Two years have passed since Patriarch Bartholomew awarded autocephaly to the schismatic Metropolitan of Kiev and All Ukraine, creating a series of unprecedented situations in Orthodoxy.

Today, he claims he did not cause a rift.

Bartholomew created a new Ukrainian church that absorbed all the rights and property of the self-governing church that operated - and continues to operate - under the auspices of the Moscow Patriarchate since 1990, provoking a Russian reaction.

The move that changed the balance in Orthodoxy was given by the then President of Ukraine, Petro Poroshenko, who methodized the emergence of an autocephalous church on Ukrainian soil, supported by the US.

From then until today, pan-Orthodox unity has been disrupted by numerous reports of a "schism in Orthodoxy" and violent persecution of Christians in Ukraine by members of the schismatic church.

Patriarch Bartholomew denies the existence of a schism.

"Because a relative paraphilology has developed, which is mainly derived from individuals and circles of the Russian Church, we must make it clear that there is no schism in Orthodoxy," Bartholomew said in a recent interview with To Vima.

"I repeat, there is no schism in Orthodoxy," he added.

"How can Bartholomew deny that he made the schism?"

"Bartholomew himself made the split. How can he deny it? He also lies as most churches have not recognized the schismatic church," theologian Nikolaos Savvopoulos told Sputnik Hellas.

"Whether he calls it a schism or not, there is a profound crisis in the Orthodox world, which has divided Orthodoxy everywhere," Savvopoulos said.

"There is the clearest dispute between the Moscow Patriarchate and the Patriarchate of Constantinople and the spearhead is the Ukrainian," he continued.

Pampos Chrysostomou, Director of Research and International Relations at the Cyprus University of Technology, also commented on the Cypriot reaction to the schism.

"The division is also seen within other churches, such as the Church of Cyprus, where the Archbishop acknowledged self-determination, despite the fact that three powerful metropolises disagreed," explained Chrysostomou.

As he points out, among other things, the division and disagreement were shown by the fact that there was no strong stance of the Orthodox Churches in the conversion of Hagia Sophia into a mosque by the Turks.

"When Greece and Cyprus accept provocative actions from Turkey, the huge mistake is the unfriendly relations and the disruption of unity with Russia and its Church, is at a time when Russia is in fact expressing a clear position on the Cyprus issue and at a time when Turkey is trying to change the basis of the negotiations," he highlighted.

Bartholomew's view is also refuted by the fact that the Patriarchate of Jerusalem also convened the Orthodox Synod in the Jordanian capital of Amman in early 2020 in an effort to avoid further disintegration of the churches.

The meeting may have been fruitless, but the call of the Patriarch of Jerusalem had resonated with a total of six of the 14 self-governing Orthodox Churches who wanted to send a strong message against the division of the Orthodox world.

Two years after his canonical enthronement, Epiphanius I of Ukraine had raised the issue of promoting his Church as a Patriarchate.

The role of the US in Ukrainian self-determination

It is not just a coincidence, the outgoing US Secretary of State, Mike Pompeo, regarding the role of the US in the promotion of the Epiphany in Kiev.

"Took action on lots of fronts with Russia, including religious freedom. I made sure the U.S. supported international recognition of the Orthodox Church of Ukraine, helped the Metropolitan escape Russian influence," Pompeo wrote in a Twitter message.

Took action on lots of fronts with Russia, including religious freedom. I made sure the U.S. supported international recognition of the Orthodox Church of Ukraine, helped the Metropolitan escape Russian influence. #FirstFreedoms pic.twitter.com/PqSktjPnsf

"It is clear that Orthodoxy is being instrumentalized for geopolitical reasons," pointed out Chrysostomou.

At the same time, in a reply letter to Ecumenical Patriarch Bartholomew, US President-elect Joe Biden expressed his warm gratitude for the congratulatory letter sent to him immediately after his election victory.

It is worth noting that in his handwritten postscript, the elected President of the US writes to the Patriarch: "Be well. We need your leadership."

"It is sad that politics is confused with Orthodoxy. We are moving towards Papism and heresy," Savvopoulos said.

Russian President Vladimir Putin had openly spoken out against Patriarch Bartholomew, stressing that he had been instigated by the US. 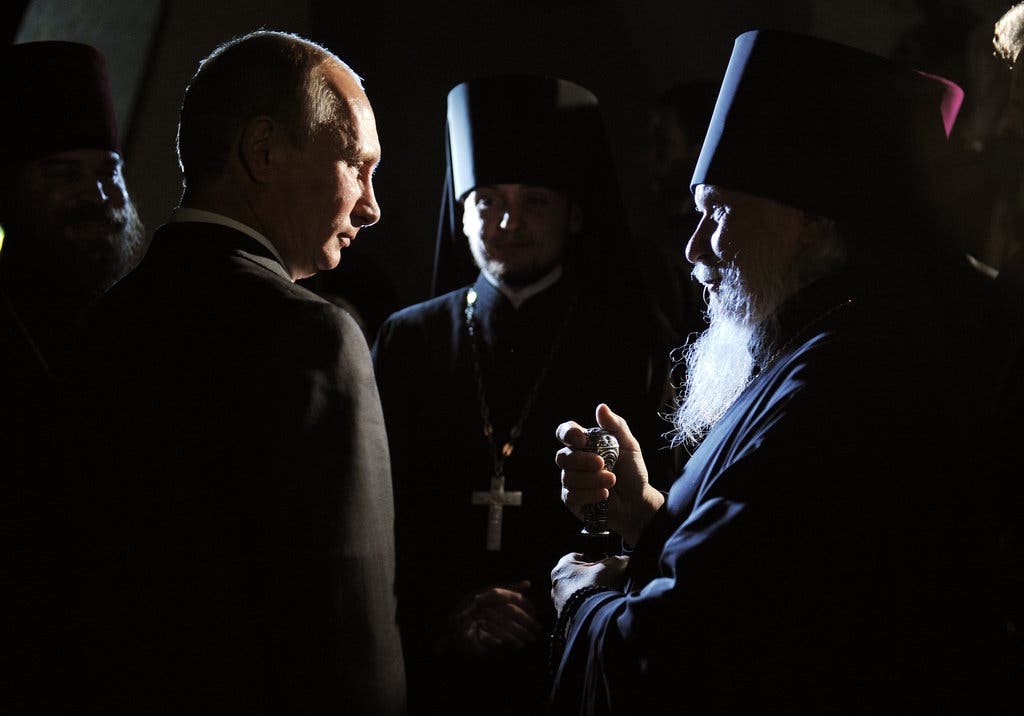 At the same time, the Church of Russia has spoken - through its representatives - of a "political plan aimed at weakening the Russian Orthodox Church, at the dismemberment of world Orthodoxy."

However, the Russian Orthodox Church is one of the few churches that recognizes the primacy of Constantinople in a special document.

The document is entitled "The position of the Moscow Patriarchate on the issue of primacy in the World Church" and was signed in December 2013.

In fact, in an earlier interview, the head of the Department of External Ecclesiastical Relations (TEES) of the Moscow Patriarchate, Metropolitan of Volokolamsk Hilaria, referring to the content of the document has pointed out, among other things, that:

"Normal tradition and Orthodox ecclesiology give the primacy of honor to the leader of the Roman church after 1054 in the Church of Constantinople. The first precedent in diptychs is referred to as 'first among equals'."

"However, for the last 100 years the Patriarchate of Constantinople has developed a teaching about primacy, effectively acknowledging the Roman Catholic model of ecclesiastical structure," he added.

Pompeo: Work done by the US and Greece in the Eastern Mediterranean ensures freedom

Erdoğan at the G20: He threatened Greece; The French demand de-escalation

Erdoğan's newest provocation: "Greece doesn't know its limits; don't mess with us, we may suddenly come"