Albanian Prime Minister Edi Rama met with Turkish President Recep Tayyip Erdoğan in Ankara at the invitation of the latter, expressing his deep concern over the Greek-Albanian agreement on referring the border demarcation dispute to The Hague.

Although Rama is a close ally of Erdoğan, he seeks to strike a balance between the West and Turkey.

The agreement between Greece and Albania for their maritime border issue to be judged by the International Court of Justice in The Hague, approved by Rama, has alarmed Erdoğan who is expected to put pressure on him to annul it.

Rama stated that it is “a right of Greece and is based on the International Convention on the Law of the Sea, which clearly states that any country can expand its maritime borders, where possible.”

He added: “Obviously with Albania, this is not the case and that is why we need the agreement. It is absolutely legal for the Greek side to say that.”

Rama seeks to maintain close relations with Turkey but also not to distance himself from the West, in order to eliminate the accusation that he is being a “pawn” of Erdoğan in the Balkans.

Rama, as an opposition, had submitted to the Supreme Constitutional Court for annulment the Greek-Albanian agreement on the Exclusive Economic Zone (EEZ) in 2008, signed by the then Prime Ministers Sali Berisha and Costas Karamanlis.

Turkey bribed members of the Supreme Constitutional Court to annul the EEZ agreement.

Erdoğan may take advantage of Rama’s internal reactions to the agreement with Greece.

His critics say Albania has relinquished part of its territorial sovereignty and is giving Greece the opportunity to strengthen its position in the International Court of Justice.

The Greek-Albanian agreement provoked a strong reaction from Albanian President Ilir Meta, who accused Rama of relinquishing territorial sovereignty and secret talks with the Greek side.

However, Rama will have to set up a negotiating team for The Hague, which will have to be approved by Meta, who also has the opposition reacting to the Greek-Albanian agreement.

President and Prime Minister have had an open vendetta for a long time and neither of them shows any intention to back down.

Albania expects the start of accession negotiations with the EU, which when done will be credited as a success to Rama, who has become a target of opposition and society for his authoritarian policies.

Accession negotiations have been blocked by Bulgaria’s veto on North Macedonia, as Brussels considers the two cases together as a package.

Rama also receives criticism from Members of the European Parliament for not going ahead with the reforms set by the EU.

During a joint press conference in Ankara, Rama and Erdoğan signed a “Strategic Partnership Agreement” as well as co-operation agreements on health, education, construction, infrastructure and culture.

They also signed an agreement on the establishment of a High Council for Strategic Cooperation between Albania and Turkey. 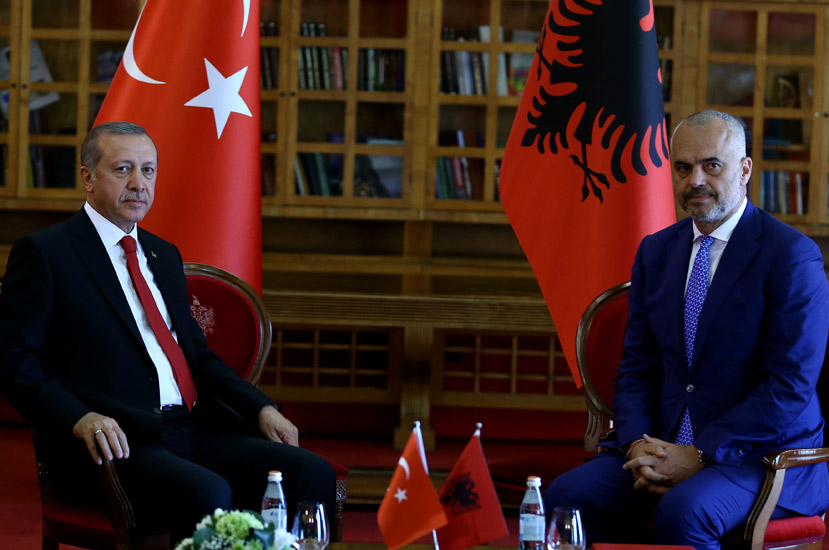 Rama, who has taken over the government of Albania since 2013, has made Turkey particularly important for Albanian foreign policy and is considered a major strategic partner.

The Albanian Prime Minister’s close relationship with Erdoğan had developed before the former came to power.

Moreover, after the failed coup attempt in Turkey in July 2016, Rama was one of the first foreign leaders to express his support for Erdoğan.

The close relationship between the two men is proved by the fact that Rama was also invited to the wedding of Erdoğan’s daughter.

At the same time, Turkey is an important economic partner of Albania as it invests heavily.

Çalik Holding is the “spearhead” of Turkish investments, as it operates in the fields of energy, mining, construction, economy and telecommunications.

In 2007, Çalik Holding acquired a majority stake in ALBtelecom, an Albanian state-owned telecommunications company with subsidiaries in Kosovo.

Turkish investments are also expanding in the aviation sector.

The Turkish penetration into Albanian society is also impressive, as Erdoğan exploits Islam to advance his strategic plans.

The construction of a large mosque in Tirana by Turkey is considered, from a religious and cultural point of view, an important exercise of “soft power” diplomacy.

The mosque will be the largest in the Balkans, with a capacity for 10,000 people, a cultural center, a library, a conference room and Turkish language courses.

Its construction cost amounts to about 30 million euros.

In addition, Turkey has a significant presence in the Albanian education system and acquired it after the fall of the communist regime.

Private schools have been open in Albania since 1993 and teach Turkish.

The close relationship between Erdoğan and Rama is proven, but from the moment the Albanian Prime Minister agreed with Greece to refer him to the International Court of Justice, he knew that he would provoke Turkish reactions.

After all, he was the one who initiated the procedures for the cancellation of the Greece-Albania agreement for the 2008 EEZ.

Georgios Protopapas is a regular contributor to SLPress.

President Sakellaropoulou: "Respect for rules is the essence of democracy"