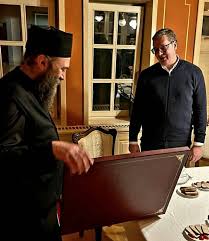 According to the Julian Calendar, which the Serbian Orthodox Church follows, Christmas is celebrated on January 7.

The Serbian President arrived at the Holy Monastery of Chilandari on Mount Athos on Christmas Eve, January 6, and stayed the next day.

Vučič posted a video of his Christmas trip to Mount Athos and the Serbian Monastery on his Instagram account.

“It was wonderful to visit the monastery of Chilandari and the fraternity of the monastery at Christmas, the happiest holiday of Orthodoxy,” he said.

“I learned a lot and saw a lot, but I believe I received a special force to fight for our Serbia – to make Serbia more successful, even stronger, to protect our national interests,” Vučič said.

The Serbian President participated in the Christmas services with the Abbot of the Monastery Archimandrite Methodius.

It is the first visit in two decades by a Serbian President.