The Philia Forum is currently being held in Athens and has the participation of Cyprus, France, Egypt, Iraq, Saudi Arabia, Bahrain, Jordan and the United Arab Emirates.

The Philia Forum is focussed on discussing a number of issues, from diplomacy and the economy, to the management of the COVID-19 pandemic and energy issues.

Mitsotakis welcomed the opening of the Forum which was organised by the Ministry of Foreign Affairs.

Among other things, Mitsotakis discussed the Cyprus problem, noting that there has to be a fair, sustainable and functional solution to the Cyprus problem on the basis of the UN Charter and relevant resolutions.

The Prime Minister reminded participants that Greece is committed to International Law and the Law of the Sea, peace, security, good neighborly relations and the peaceful settlement of disputes.

Mitsotakis clarified in an obvious message to Turkey that the Philia Forum “is open to all” as this organisation unites three continents and connects Europe with the Arab world.

He added that this pioneering form of cooperation, as he characterised it, marks the partnership of Greece, Cyprus and Egypt with new partners such as Bahrain, Saudi Arabia and the United Arab Emirates, connecting the Mediterranean, the Red Sea and the Gulf.

Referring to COVID-19, Mitsotakis noted that the fundamental values ​​of the United Nations, namely security, justice and equality, acquire a new meaning in the time of pandemic.

He also highlighted that diplomacy and the economy in all its aspects will be framed by cooperation on many other issues, from cultural exchanges and environmental protection to the issues of everyday people. 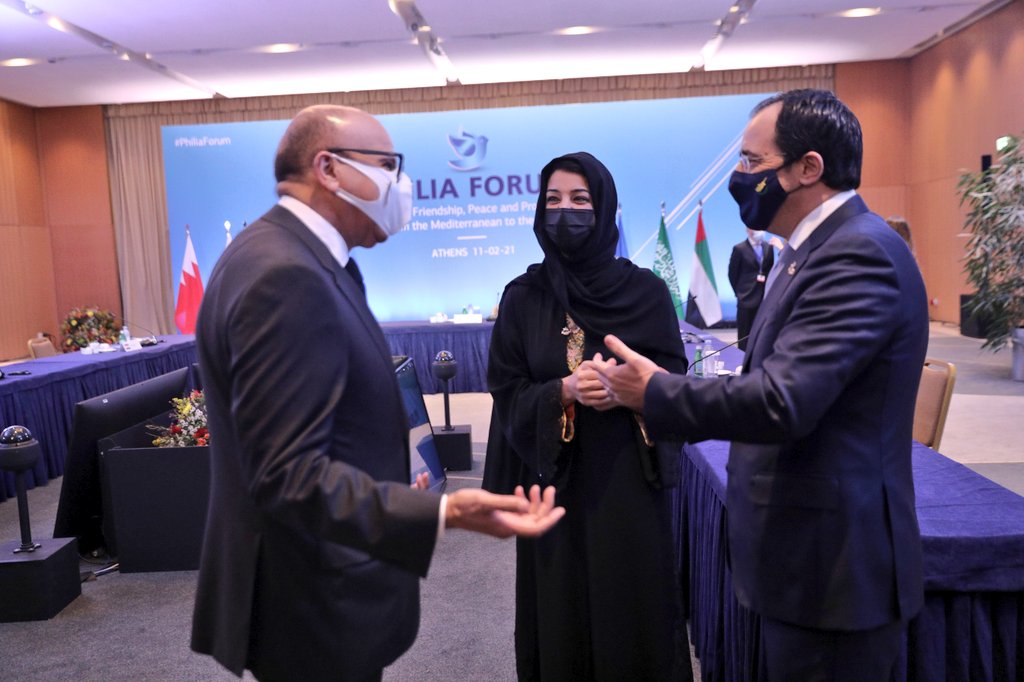 Mitsotakis explained that it is natural for Greece to suggest this forum as it is positioned in the middle of two geographical arcs – a horizontal one from Portugal to the Persian Gulf and a vertical one from the Balkans to Egypt, which connects Europe with Africa.

He noted that the Philia Forum came from the Greek word ‘friendship,’ which means much more than an alliance, because it also indicates common values, ties and feelings that run through culture and history.

READ MORE: What brings Greece, India and the United Arab Emirates together?

Mitsotakis to Erdoğan: We strengthen our deterrence capability without asking for anyone's permission

Greece will not retreat: Greek President and Prime Minister response to Turkish threats

Britain to upgrade communications on Cyprus military base

Lavrov: Greece does not want to pursue sanctions against Russia, we trust our Greek friends