Dimitris Papandreou was born March 3, 1891, to a very poor family in rural Greece.

He nonetheless managed to attend both theological and law school simultaneously, graduating from both before being drafted to fight in the Balkan Wars of 1912-1913.

He was ordained as a minister in 1917, taking the name Damaskinos.

His career leading up to the days of the German occupation shows a man who was devoted to the Church, as well as its role in helping and uplifting the Greek people.

Damaskinos presided for three years over an organization aimed at creating a higher level of education in the Greek clergy.

As Bishop of Corinth during the disastrous earthquake there in April 1928, his deep commitment to his flock was widely recognized.

He assumed a leadership role in the relief and repair efforts, traveling to the U.S. where he galvanized the Greek Diaspora to contribute to those efforts.

In 1938, Damaskinos was voted by the Greek Orthodox Church into the position of “Archbishop of Athens and All of Greece.”

However, fearing his democratic sentiments and support for former Prime Minister and Liberal Party leader Eleftherios Venizelos, the dictatorship at the time overturned the decision in the courts.

Damaskinos was placed under house arrest in Salamina for the duration of the dictatorship and the Greek-Italian War of 1940-41.

If nothing else had happened in the life of Damaskinos, he would still be remembered as a significant figure in 20th-Century Greek history.

But there was so much more to come.

The government that had arrested Damaskinos fell with the German invasion of Greece in 1941.

The Church seized the opportunity to reinstate Damaskinos as Archbishop.

Lesser men would have been silenced (or have silenced themselves), but not Damaskinos.

He believed that his sworn duty as a cleric was to be a shepherd to all his flock, which he regarded as all citizens of Greece, not just those of his Church. The Archbishop used his influence to get the UK and Turkey, especially the latter, to ship food to starving Greeks.

Then, when the German occupation forces announced conscription of Greek citizens with plans to send them to the Russian front or to forced labor in German factories, he masterminded a widespread worker strike.

His love for his flock and his deep belief in the sanctity of all life came mightily to the fore during the darkest times of 1943.

Deportation of Jews, gypsies, and other minorities had reached a fever pitch, not just in Greece but all through occupied Europe.

At a time when even many religious voices were quieted, the Archbishop boldly challenged Nazi authorities.

On the 23rd of March, 1943, Damaskinos marched into the office of SS General Jürgen Stroop, the man who had personally overseen the complete destruction of the Warsaw ghetto and the deaths of tens of thousands of Jews in Warsaw, and presented him a letter.

The same letter had previously been submitted to the Prime Minister of the occupation government.

The Greek people were rightfully surprised and deeply grieved to learn that the German Occupation Authorities have already started to put into effect a program of gradual deportation of the Greek Jewish community of Salonika to places beyond our national borders and that the first groups of deportees are already on their way to Poland.

The grief of the Greek people is particularly deep because of the following:

According to the terms of the armistice, all Greek citizens, without distinction of race or religion, were to be treated equally by the Occupation Authorities.

The Greek Jews have proven themselves not only valuable contributors to the economic growth of the country but also law-abiding citizens who fully understand their duties as Greeks.

They made sacrifices for the Greek country and were always on the front line in the struggles of the Greek nation to defend its inalienable historical rights.

The law-abiding nature of the Jewish community in Greece refutes a priori any charge that it may be involved in actions or acts that might even slightly endanger the safety of the Military Occupation Authorities.

In our national consciousness, all the children of Mother Greece are an inseparable unity: they are equal members of the national body irrespective of religion or dogmatic differences.

Our Holy Religion does not recognize superior or inferior qualities based on race or religion, as it is stated: "There is neither Jew nor Greek" (Galatians 3:28) and thus condemns any attempt to discriminate or create racial or religious differences.

Our common fate, both in days of glory and in periods of national misfortune, forged inseparable bonds between all Greek citizens, without exemption, irrespective of race.

…Today we are interested in and deeply concerned with the fate of 60,000 of our fellow citizens, who are Jews.

For a long time, we have lived together in both slavery and freedom, and we have come to appreciate their feelings, their brotherly attitude, their economic activity and, most important, their indefectible patriotism.

Evidence of this patriotism is the great number of victims sacrificed by the Greek Jewish community without regret and without hesitation on the altar of duty when our country was in peril.

Mr Prime Minister, We are certain that the thoughts and feelings of the Government on this matter are in agreement with those of the rest of the Greek nation.

We hope that the Occupation Authorities will realize in due time the futility of the persecution of Greek Jews, who are among the most peaceful and productive elements of the country.

If, however, they insist on this policy of deportation, we believe that the Government, as the bearer of whatever political authority is left in the country, should take a clear stance against these events and let the foreigners bear the full responsibility of committing this obvious injustice.

Let no one forget that all actions done during these difficult times, even those actions that lie beyond our will and power, will be assessed someday by the nation and will be subjected to historical investigation.

In that time of judgment, the responsibility of the leaders will weigh heavily upon the conscience of the nation if today the leaders fail to protest boldly in the name of the nation against such unjust measures as the deportation of the Greek Jews, which are an insult to our national unity and honor.

General Stroop was outraged and threatened to shoot Damaskinos.

The Archbishop’s response, in part, was, “According to the traditions of the Greek Orthodox Church, our prelates are hanged and not shot. Please respect our traditions!” 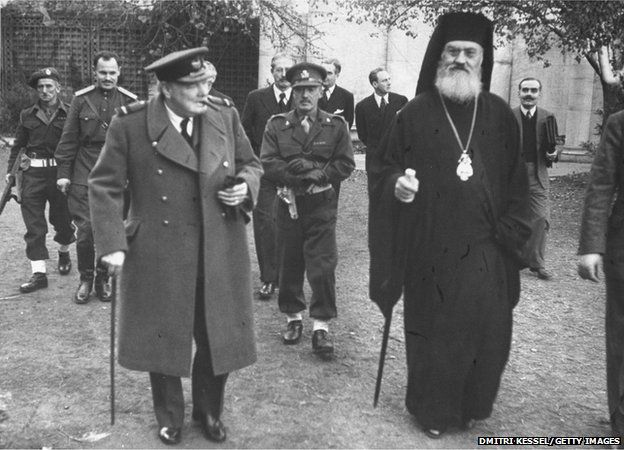 This remark so shocked the General that he did not carry out his threat.

The Salvation of the Greek Jews

His courage was a clarion call to the Greek people who took up the task of protecting the Jews.

The letter failed to bring results, but the Archbishop pressed his demands elsewhere.

Damaskinos called upon the police chief of Athens, Angelos Evert, who was of a similar mind and disposition, and told him:

“I have spoken to God, and my conscience tells me what we must do. The Church will issue false baptismal certificates to any Jew who asks for them and you will issue false identification cards.”

More than 27,000 such false identity papers were issued.

“I have taken up my cross,” the Archbishop declared. “I spoke to the Lord, and made up my mind to save as many Jewish souls as possible.”

He urged the clergy to shelter and provide aid to any of the persecuted who asked for it.

Many Jewish families survived in hiding because of the Archbishop’s request.

His courage — and that of the clerics who followed him — was a clarion call to the Greek people more generally, who took up the task of protecting the Jews.

One of the most telling stories was from the Isle of Zakynthos, where the Nazi SS asked the mayor and the bishop to hand over the names of the resident Jews for deportation to Auschwitz.

In a brave act of defiance, the list given to the Germans contained two names: the mayor’s and the bishop’s!

Of the 275 Jews of the island, not a single Jewish name was handed over, and every Jew was hidden for the duration of the occupation.

The same sentiment was echoed by Joachim, Metropolitan of Volos, who, when asked for a list of Jewish residents, replied “I am a Jew.”

Then he mobilized local resistance to evacuate the 702 Jews of the city to the adjacent mountains and villages.

During the Nazi occupation, over 600 Greek Orthodox priests were detained and deported for their actions, inspired by the courage of Archbishop Damaskinos.

He is universally remembered as a hero for all humanity.

The Archbishop was placed under house arrest in 1944, and there was talk of deporting him to the concentration camps.

Luckily this never happened, and Damaskinos lived to see Greece freed from the Nazis.

In fact, Damaskinos briefly served as the country’s regent after the War.

The legacy of Archbishop Damaskinos was not forgotten.

He was honored by Yad Vashem, Israel’s Holocaust Museum in Jerusalem, as “Righteous Among the Nations,” an important designation given to non-Jews who risked their own lives to save Jews during the Holocaust.

The Archbishop is prominently featured in a permanent exhibition at the International Holocaust Museum in Washington, D.C.

In Greece today, Damaskinos is universally remembered as a hero for all humanity.

Anniversary edition of Stratego board game commemorates the 1821 Greek Revolution

Pashinyan maintains anti-Russia position despite Armenia's abandonment from the West