Religious intolerance has been on the rise lately.

In a world where efforts are being made by various countries to build a rules-based order and respect for basic human rights, many others are doing the exact opposite.

As the world has been focusing its attention on the rise in terrorism and the role of Islamic fundamentalism in it, understanding its finer nuances becomes all the more reasonable.

It was Nazi Germany that made the world understand what a “holocaust” looks like.

As a result of it, we understood what genocide based on racial and religious discrimination is.

Even today, the horrors of the holocaust haunt the world as we try to establish peace in a global village.

However, certain countries are repeating history, albeit in very sophisticated and subtle forms.

Pakistan, in a bid to proclaim itself as the protector of the Muslim world, has been carrying out a dirty secret war in Balochistan which can be best describes as elusive.

Building upon the mass graves of minorities in Pakistan Occupied Kashmir (PoK), like the Hazara Shia community, the Hindus, and Sikhs, Islamabad has been committing grave human rights violations.

By employing a clever combination of deception, blame-shifting, and technology, Pakistan has been evading responsibility for its misdeeds as this genocide remains criminally under-reported.

Nature of the Genocide

Recently, on January 3, 2021, BBC reported that 11 miners of the Shia Hazara minority community had been slaughtered by Sunni-hardliner militants.

But minorities on the whole in Pakistan, and especially Balochistan, have been the subject of targeted killings. The Hindu community in PoK has still not recovered from the wounds of the Bugti incident where 32 Hindus were brutally killed by the security forces, as BBC reported then in 2005.

However, silence over the same back then has resulted in a sorry state of affairs today as well.

Hindu temples in Balochistan and even in the whole of Pakistan are slowly being demolished.

Consequently, the minorities in Pakistan are being targeted based on their religion as Pakistan continues to support militant outfits through its “deep state”.

Pakistani Prime Minister Imran Khan admitted back in 2019 in a video that the Pakistani government has indeed been committing genocide in Balochistan.

Despite such explicit admissions, the world has turned a blind eye to the grave human rights violations taking place in PoK.

The nature of the genocide varies from forced disappearances to torture to extrajudicial killings.

The militant outfits, which are specifically backed by the Pakistani spy agency, Inter-Services Intelligence (ISI), have been working to create hatred against minorities like Hindus and Hazara Shias.

Pamphlets carrying hate messages and anti-Shia rallies have secretly found their way into Quetta, a Pakistani town on the Afghan border, and Balochistan.

Simultaneously, the US 2019 International Religious Freedom Report had stated that continued reports of attacks on holy places, cemeteries, and religious symbols of Hindus, Christians, and Ahmaddiya minorities have continued in Balochistan.

Another report highlighted that in 2016, over 1000 bodies were found dumped in Balochistan.

The minorities in Balochistan are reportedly not being granted Computerized National Identity Cards (CNICs) by the government, which leads to difficulties for them to access basic needs like healthcare, employment, and education. 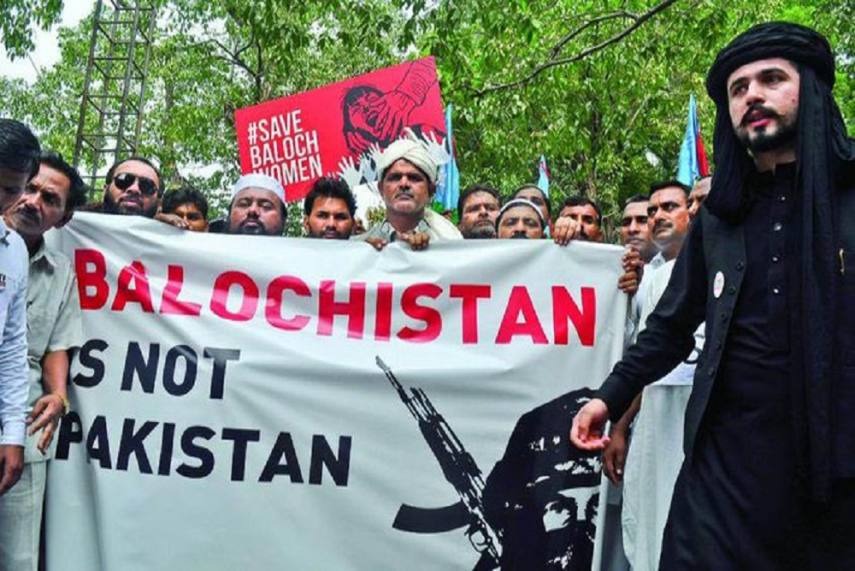 This is the very reason that Balochistan is the poorest region in Pakistan.

Such a coordinated effort at profiling Hindus and Shia minorities like Hazaras and Ahmaddiyas can be best described as ghettoization of the minorities in Balochistan.

Thus, categorizing this genocide as something similar to the Jewish Holocaust won’t be an overstatement.

According to Pakistani authorities, the high number of killings in Balochistan and related human rights violations have been time and again claimed to be perpetrated by terrorist organizations.

However, the world needs to realize that such a tactic is, in fact, a very cruel ploy devoid of reality.

A “deep state” can simply be defined as a “state within a state” that possesses a disproportionate influence in a state’s polity.

Pakistani forces have been known to back militant organizations, both in terms of providing weapons and training, and economic impetus.

No wonder that Pakistan has maintained a place in the Financial Action Task Force’s (FATF) grey list.

And the role of ISI, the Pakistani intelligence agency, has been at the forefront of maintaining these unholy alliances with terrorist outfits to achieve Islamabad’s foreign policy goals.

It is this trio of Pakistani security forces, ISI, and militant outfits backed by them that comprise the Pakistani “deep state”.

This “deep state” is leading the genocide in Balochistan as Pakistan tries to project itself as the leader of the Muslim World.

Imran Khan has been known to maintain extremely close links with the Army and ISI, which have otherwise been at the forefront of military coups in the country’s troubled past.

The ISI has also been accused of threatening academicians in the US who speak out against Islamabad’s involvement in Balochistan.

Thus, it leads us to the final question- why is Pakistan doing it?

Imran Khan has been, for some time now, trying to posit himself as the protector of Muslims around the world.

Interestingly, this vision of his is quite similar to Turkey’s President Erdogan’s dream of reinventing the Ottoman Empire in the contemporary day.

What’s even more curious is the fact that Pakistan and Imran Khan have maintained absolute silence on the Uyghur genocide in China.

Now, one might wonder that these three developments seem to be separate from each other. However, it is only upon a closer look that one realizes that the three are a part of a larger jigsaw puzzle that has the China-Turkey-Pakistan nexus at its core.

Pakistan has maintained an all-weather friendship with China over the past years.

China, with its aim of establishing its World Order by challenging and replacing the US, has undertaken a strategy of threatening India.

To achieve this, Islamabad has become a pawn of Beijing, with Chinese Premier Xi Jinping enticing Imran Khan with the China Pakistan Economic Corridor and weapons.

And Pakistan, sharing the common concern of India’s rise, has been paying the debt to China by undertaking terrorist activities in PoK that houses these minorities.

At the same time, ISI’s cross-border terrorism adventures have landed it in a lot of trouble lately with the FATF.

Coincidentally, Turkey was the only country that tried to bail out Pakistan from being listed on the FATF grey list this time.

This is where Ankara and Islamabad’s similar visions of establishing a universal Muslim rule comes to play.

Pakistani terrorists have been receiving sanctuary in Turkey, while Turkey is now sending its mercenaries to Kashmir in India.

Defense ties between the two have reached new highs as Islamabad is reportedly transferring nuclear missile technology to Ankara, raising eyebrows across the globe.

It has emerged as the newest security threat in the Indo-Pacific construct and especially for India.

Thus, this nexus is the fundamental aspect in deciphering the riddle of Pakistan involving itself in this dirty secret war its waging in Balochistan and the rest of the PoK.

Since we have now understood the finer nuances of the problem, it becomes extremely important to think of how to approach this problem in the future and what the concerned states can do in this regard.

First of all, as opined by experts at a webinar organized by Delhi-based think tank, Red Lantern Analytica, there is a strong need to build a “coalition on genocide”.

In this regard, countries like India, Greece, and Armenia should come forward and highlight these issues globally.

Secondly, in creating awareness on the Balochistan issue, civil society organizations should take a leading role in activism.

People from Balochistan, such as Dr. Amjad Ayub Mirza and many more have been leading this fight and it is time that the global community joins them in creating an effective dialogue about the same. 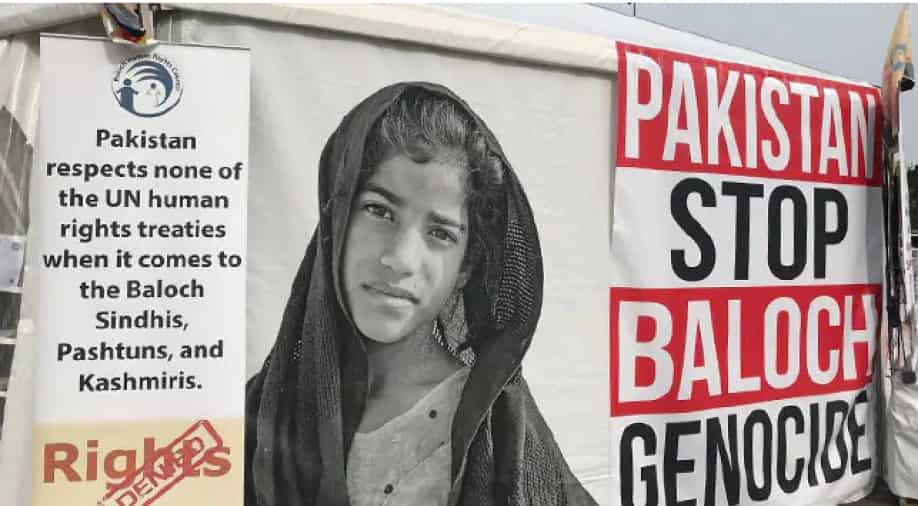 Lastly, India, which is the most crucial state in this fight, should employ a stronger threat perception in formulating its national military doctrine, especially with regards to China and Pakistan.

While the ceasefire agreement with Islamabad and the de-escalation with Beijing are welcome developments, New Delhi should be cautious in its future approach.

Anticipating threats promptly and formulating strategy in consonance with it shall help India to leap-frog into a superpower in the future.

The importance of a patriotic counter culture

Pakistanis in Athens call for a rally outside the Indian embassy on Sunday! – Will the Government allow it?