Thousands of years ago, King Xerxes of Persia built a canal to avoid Mount Athos.

The Municipality of Aristotle in collaboration with the Ephorate of Antiquities of Halkidiki and Mount Athos plan to do some minor excavation in the area King Xerxes had built the canal.

Herodotus describes King Xerxes’ voyage through the canal that he opened by his order between today’s Tripiti and Nea Rhodes and connected the gulf of Ierissos with the gulf of Siggitos. 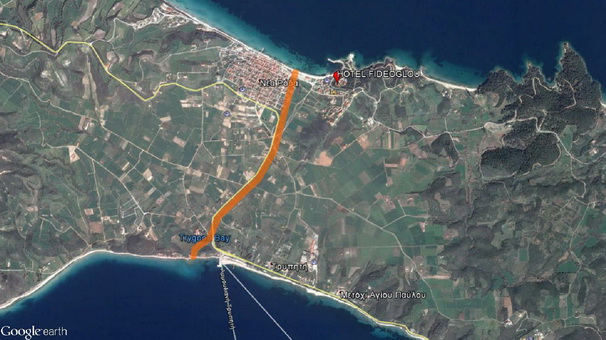 This was in order to avoid Mount Athos and sending his huge fleet from Akanthos to Thermi (as Thessaloniki was then called).

The canal was opened so that its ships would not have the luck of Mardonius’ fleet that had been destroyed by a storm on Mount Athos a decade earlier.

All this took place in 480 BC during the Median War, according to Herodotus.

In fact, the death of the master of the canal, Artaxerxes, as described by Herodotus, plunged Xerxes into grief, who considered his death a bad omen.

Artaxerxes was buried by the Persians with honors in Akanthos.

The Xerxes canal in the area of ​​Halkidiki is today the only technical footprint of the Persians in Europe, as Mayor Aristotle, Stelios Valianos, told Sputnik Hellas.

“It’s the only Persian footprint in Europe and it has a uniqueness,” he said.

“Obviously it is worth knowing how the canal was technically and technologically made at that time,” Valianos continued.

Today the canal may not be visible as it is buried, but archaeologists describe it as “the largest construction work done in Halkidiki” in antiquity.

British and Greek engineers conducted geological surveys and a study of sediments in 2008 to locate the exact location of the Xerxes’ canal and documenting what historical sources said about the impressive project.

The impressive canal was 2 km long, 30 meters wide, while its maximum depth is estimated at 15 meters.

It is noteworthy that the canal after its opening was abandoned and therefore, as archaeologists say, there are no remains of buildings around it.

According to archaeologist Ioulia Vokotopoulou, the canal was not only opened, but also used.

The geographical location of the canal was not easily understood as the area had been turned into a garbage dump with uncontrolled vegetation.

However, recently, the services of the Municipality, as Valianos said, cleaned the entire area.

With the help of the archaeologists of the Ephorate of Antiquities of Halkidiki and Mount Athos, Costas Papastathis and Olympias Nasiokas, the Municipality of Aristotle proceeds with a series of gentle actions to highlight the important site.

“The area was really a rubbish dump with uncontrolled vegetation,” he said.

“We cleaned it and highlighted it as a geographical point,” the mayor stressed.

“In other words, one can now, after this intervention, locate the point of the canal and how far it extended,” Valianos continued.

“We will make gentle interventions and will create a point of memory,” he added.

He explained that the resources and funds are from the Municipality.

Among the work is the placement of information signs with texts that will be written by archaeologists so that the visitor learns everything about the Xerxes canal.

The area has been included by the Municipality of Aristotle as a pedestrian walkway where people can follows the footsteps of the Persian King Xerxes.

In fact, within the area that was the Xerxes canal, the Municipality with the consent of the archaeological service will create parks focused on the crops of Greek antiquity, namely  vines, olives, figs, pomegranates etc.

READ MORE: These are the collectible coins for the 2,500th Anniversary of The Battle of Thermopylae & Salamis.