A Sergeant, he was head of a 5 man crew ordered to defend a pillbox on Mt Mpelles from the approaching German Army, near his home town of Ano Poroia.

The pillbox was part of the Metaxas Line, a series of fortifications built on the Greek-Bulgarian border. 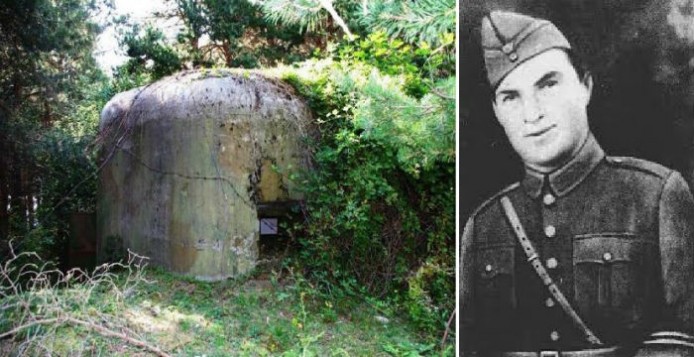 The initial objective given to Itsios and his crew was to merely provide cover fire so that Greek troops could retreat safely from the area.

However, he and his crew did much more than that.

In a firece battle they emptied all of their rounds of ammunition (over 33,000 bullets) into the Axis invaders and not only did they provide cover fire, but they managed to kill 232 German soldiers in the process.

At this point, Itsios ordered his four comrades to stand down and escape.

However, two of them stayed with him since they were locals.

After they had run out of ammunition, they surrendered to the Germans.

German General Schörner demanded to know who led the operation and Itsios revealed himself to be the leader.

General Ferdinand Schörner then ordered his men to draw their weapons and Itsios was shot in the head, murdered in cold blood after he surrendered, one of the many war crimes committed by the Germans during World War II

The wife of martyr, Anna, managed to retrieve her husband’s bones in 1936 and transport them for burial in Ano Porroia.

Dimitrios Itsios is a Greek Hero. ON THIS DAY 22 AUGUST: The Holocaust of Kedros, Crete- Germans massacre population of nine villages