The first step in building a new cooperative relationship between Greece and Libya took place on Tuesday with the visit of Prime Minister Kyriakos Mitsotakis to Tripoli.

He met with interim Prime Minister of Libya Abdul Hamid Dbeibeh, the head of the presidential council Mohammed Menfi, and visited the Greek embassy in Tripoli which reopened after seven years of closure. 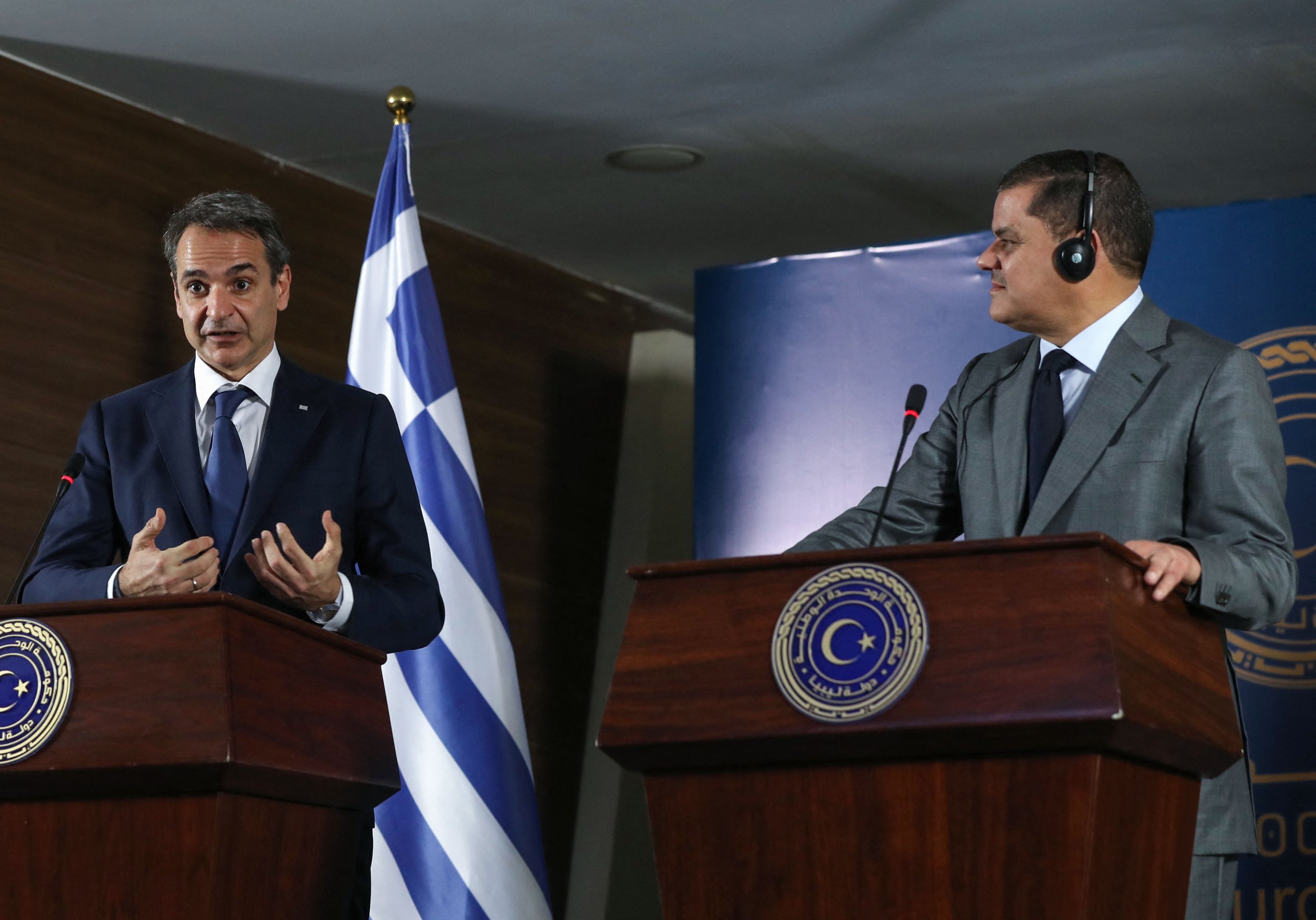 In his talks with the caretaker Prime Minister of Libya, Mitsotakis called for the "cancellation of illegal documents that were presented as alleged transnational agreements but have no legal force, as explicitly ruled by the European Council."

This was a direct reference to the memorandum to steal Greek maritime zones signed in November 2019 between then-Libyan Prime Minister Fayez al-Sarraj and Turkish President Recep Tayyip Erdoğan.

"It is the geography that determines the framework of our bilateral relations, and not the artificial lines that some people draw on maps," Mitsotakis said yesterday in Tripoli.

"I therefore welcome your willingness to be able to discuss directly and bilaterally issues related to the delimitation of maritime zones - as we should do as neighboring countries - and to continue negotiations which were interrupted in 2010," he continued.

"The European Union and its members are here, and are determined to support the Libyan people, who have suffered so much in the last decade," the Greek Prime Minister said.

He also called for the immediate and complete withdrawal of foreign troops and mercenaries from Libyan territory.

Turkey maintains in Libya a force of about 10,000 Syrian mercenaries who had fought in the civil war on the side of former Muslim Brotherhood Prime Minister, Sarraj.

The caretaker Prime Minister of Libya (elections are scheduled for December 2021) said to Mitsotakis that he is willing to form a committee to discuss the delimitation of the maritime zones starting from the point where the talks stopped in 2010.

However, Dbeibeh pointed out that the government is defending the interests of the country it serves by pointing out that the cancellation of the illegal Turkish-Libyan memorandum will not be so easy, nor should it be expected soon .

Despite maintaining good relations with Ankara and the Muslim Brotherhood, Libya's caretaker Prime Minister has sent messages that he wants co-operation and the restoration of relations with Greece.

It is obvious that the transitional institutions are almost impossible to make big decisions and Athens knows that at this stage the demand for the cancellation of the illegal agreement will not succeed easily.

The effort made by Mitsotakis and Dendias was to persuade their Libyan partners to not make moves to activate the illegal Turkish-Libyan memorandum.

Effectively, Athens asked Tripoli to not proceed with decisions that will be perceived as a practical move to activate the provisions of the illegal memorandum.

The aim of the Greek government, in the first phase, is not to make things worse and at the same time to create the conditions for the resumption of the Greek-Libyan dialogue for the delimitation of the maritime zones  from the point that was stopped in 2010.

Greece did not "miss a historic opportunity, as happened in the past with Libya, when for a percentage of 3.7% of the total area, the maritime zones with this country were not demarcated," revealed Dendias.

That means the requests submitted to the Libyan National Oil Company by Tripoli have not yet been approved for Turkish state TPAO to be granted a licenses to conduct exploration for hydrocarbon deposits in the Greek continental shelf south of Crete.

Mitsotakis reminded that in the last decades more than 280 Libyan officers have graduated from schools in the Greek Armed Forces.

Dendias: Greece will support the reconstruction of Libya