Dendias is currently meeting with his Turkish counterpart, which will then be followed by extended talks between the two delegations.

It is noted that the meeting will take place in the building complex of the Presidential Palace.

The unpredictable initiative of the Turkish president to talk to Dendias is considered a highly symbolic move given that Erdoğan is not accustomed to accepting politicians who are not at the level of the head of state or government.

In fact, the invitation of the Turkish Presidency to the Greek Foreign Minister upgrades the important visit of Dendias to Turkey for talks with the Turkish counterpart.

The Dendias-Erdoğan meeting was requested by the Turkish side.

The request was made through diplomatic channels, by the Turkish ambassador to Athens, Burak Özügergin on Wednesday afternoon.

The Greek government accepted the request.

A diplomatic source in Athens acknowledged Erdoğan's invitation to Dendias as a symbolic move, in which the Turkish president wants to show internationally the importance he attaches to the Greek Foreign Minister's visit.

Obviously, however, Erdoğan's "gesture" should not be seen as a change in Ankara's strategy.

Moreover, Erdoğan himself reiterated on Wednesday that his government is ready to start hydrocarbon exploration in the maritime zones south of Crete included in the Turkish-Libyan memorandum, where Greece has clear and inalienable sovereign rights.

He also said that Turkey is being wronged in Cyprus. 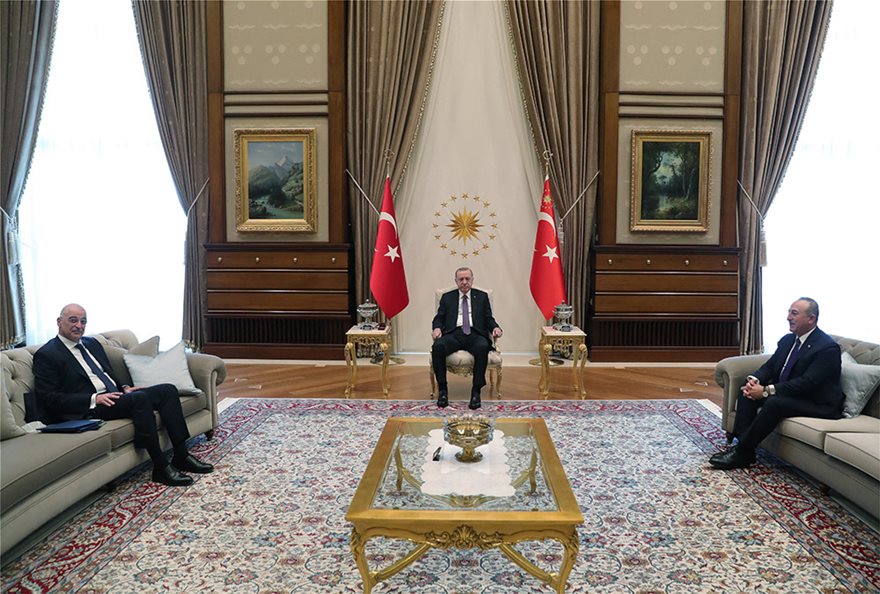 "The dialogue with Greece and high-level visits are very important and satisfactory," said Çavuşoğlu.

"We are glad to welcome Mr. Dendias in Ankara. we will discuss the Aegean, Cyprus and the Eastern Mediterranean in an honest atmosphere," he continued.

"We must address the issues that we cannot resolve in the Aegean and Eastern Mediterranean through dialogue," Çavuşoğlu said.

Cyprus, Greece, Israel and UAE to meet in Paphos on Friday and Saturday

Dendias corrects Çavuşoğlu on "Turkish minority in Greece, only Muslim