Last Friday, Deputy Minister of Education, Angelos Syrigos, visited inaugerated an Alevi place of worship, known as a Cemevi, in Megalo Derio during his tour of Evros on the Greek-Turkish border.

Syrigos gave official permission for the Alevi’s to operate a Cemevi, thus recognising them as a religious minority.

In addition to worship, the house will also carry out various other services (such as food distribution) to people in the village and surrounding area, Evros News reported. 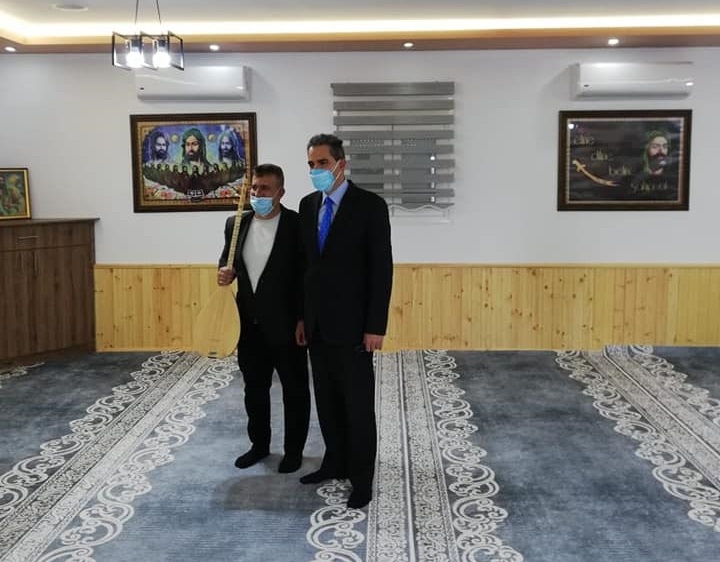 The Alevis are a religious tradition steeped in mysticism and place emphasis on the teachings of Ali, a cousin and son-in-law of Muhammad, the founder of Islam.

The Alevis, who were endlessly persecuted by Ottoman authorities and even to this day by the Turkish Republic, make up as much as 33% of the Turkish population (Turks and Kurds), with smaller communities existing in Greece, Bulgaria and Iran.

A law enacted by the founding government of Turkey in 1925 banned Alevi Cemevi’s.

The law exists to do this day.

Effectively, since 1925, Alevism has not officially been recognised as a distinct faith by the Turkish government

Although Cemevi’s do exist in Turkey today, according to a parliamentary report in 2013, of the 82,693 mosques in the country, only 937 were Cemevi’s that were built with their own funds and with no government support.

The Turkish government not only discriminates against Alevis, but claims that Alevism “is a sect of Islam.”

It is a claim disputed by many Alevis, such as Mustafa Genç, a dede (faith leader), who has described the difference between Alevism and Sunni Islam.

“In Sunnism, they pray five times a day and fast for a month. These things do not exist in the Alevi faith. According to our faith, God is in the human and not in the sky,” he said.

“In the Alevi faith, women are sacred, and to divorce a woman is the most difficult thing. This is not the case in Sunnism. Sunni Muslims think a man can marry four women,” Genç added.

The author, Naki Bakır, also emphasised the difference between the two religions.

“The Alevi faith is different from Islam and some of its elements are contrary to Islam,” he said.

For example, according to the Alevi belief, each human will be born into this world several times in different bodies until he or she becomes perfect and when that process is completed, he or she will unite with God,” Bakır explained.

“This belief is contradictory to the Islamic belief in the ‘afterlife’ represented in the ‘award-punishment’ or ‘heaven-hell’ mechanisms,” he continued.

“The Alevi ritual is ‘cem’ — during this ritual, alcohol is drunk, women and men worship together and turn in circles, to the accompaniment of some musical instruments… These things do not exist in the Quran, hadith, or in the life of Prophet Mohammed,” he stressed.

“They are actually prohibited in Islam. And the Alevi belief in ‘hulul’ (that God is manifested in the human body) is idolatry, according to the Quran,” the author said.

According to the Alevi scholar, Mehmet Bayrak, one of the reasons that some Alevis say they are Muslim is their misconception of their own religion.

“Due to the centuries-long propaganda they have been exposed to, some of them think that they are true Muslims,” said Bayrak, adding that a more alarming reason for their denial is fear of persecution.

“As Alevis are still under political, social and cultural pressures [in Turkey], they are still scared of saying that Alevism is outside of Islam. It is impossible for them to express themselves freely,” he explained.

Syrigos also discussed with the leading Alevis in the area, as well as Deputy Mayor Orpheus of the municipality of Soufli, Yusuf Kotsa, about the problems that schools in the area experience.

The Ministry of Education is also responsible for religious issues and the operation of places of worship.

In this context, but also because he wanted to show his interest to the Alevis and their issues, Syrigos promised to represent their interests.

READ MORE: Pictures from the new border fence being constructed in Evros: What about migrant flows?

Dendias meets with Wehbe in Athens: "We will continue supporting Lebanon"