U.S. President Joe Biden’s special envoy for climate John Kerry on Wednesday welcomed the Greek government’s climate initiatives, while speaking at the Delphi Economic Forum being held in Athens, the Forum’s organisers said in an announcement.

Kerry referred to problems currently facing humanity, such as the economy or geostrategic challenges, noting that it would be impossible to address them without addressing the climate crisis.

He underlined that the world needs more than just government action, saying that governments alone were unable to deal the problem and putting emphasis on the private sector, while urging all citizens to back this effort.

The envoy praised the Greek government’s effort in this direction, saying that he was very happy to see that Greece wants to become leader in the effort to mitigate climate change and adding that Greece was among the first countries to adopt the EU agenda on climate. 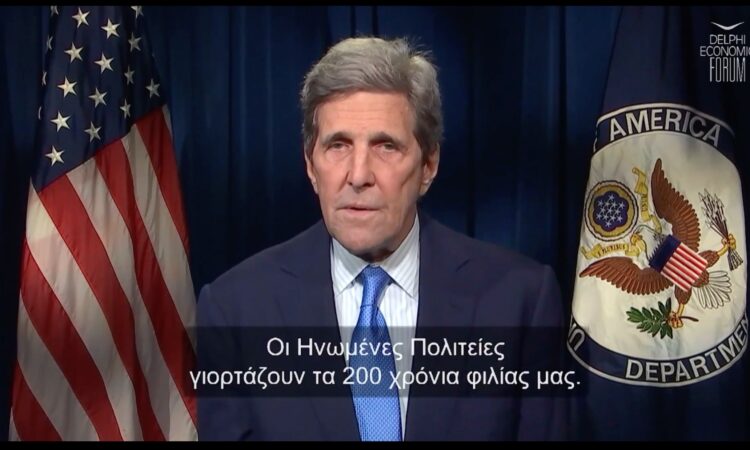 Kerry also congratulated Greek Prime Minister Kyriakos Mitsotakis for his decision to speed up the transition from carbon by many years.

Finally, he said that addressing the climate crisis was the most important challenge facing the world since the industrial revolution began, while stressing that it should be viewed “as an important opportunity that we must seize.”

He praised the research underway at Greek Universities, adding that the change was not only feasible but also an important opportunity and Greece was proving this.

He expressed regret that he had been unable to attend in person, saying that US Ambassador Geoffrey Pyatt had described the Delphi Economic Forum as being like “Davos with olive trees.”

Israeli Ambassador To Greece: We know Turkey's relationship with Hamas

32-year-old Pakistani in prison for attempted rape in Karpathos