The Kemalist newspaper Sözcü “sees” a U.S. military base on the North Aegean island of Samothrace and continues the story of a “strategic encirclement” of Turkey by U.S. forces.

In fact, the newspaper “saw” a joint Greek-American inspection on the island of the northeastern Aegean, in order to select suitable sites.

“The US, which is accumulating troops in the port of Alexandroupolis in western Thrace for the purpose of exercises, this time, plans to equip Samothrace and establish a base there,” the newspaper wrote.

“Top U.S. officials gather thousands of troops and military vehicles in Alexandroupoli in Western Thrace, which is located at a distance of 30 kilometers from Turkey,” the report claimed.

“It is reported that together with officials of the General Staff of the Greek army they inspected the island of Samothrace,” the publication added. 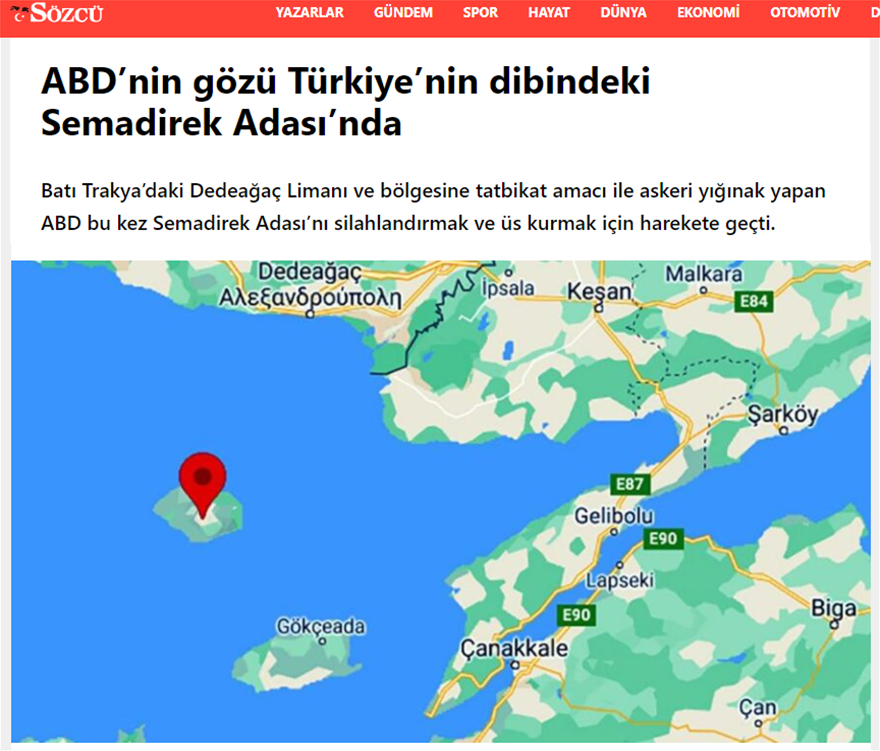 The report, signed by Yaşar Anter, notes that in Samothrace, “the construction of a helicopter runway, equipped with the latest technology and modern infrastructure” is planned, while there is also thought of creating a small military base.

“The director of the Civil Aviation of Greece, George Dritsakos, and the director of the airport of Alexandroupolis, Stelios Zantanidis, together with engineers, conducted on-site surveys on the island,” the report continued.

“The construction of the helicopter runway that will operate for 24 hours will primarily benefit the military units of Greece and NATO as the existing runway will be modernised and will grow,” it said.

“After Alexandroupolis, they also want to set up a small military base on the island of Samothrace,” the article concluded.