Corfu, together with the other Ionian islands , formed an autonomous state with its own flag and parliament (Ionian Parliament) in 1800 after Russia and Turkey agreed to this status.

It was the first time that the Greek people won the right to govern themselves after the fall of Constantinople in 1453.

In the seven years that lasted, the economic and social life of the people of Corfu improved dramatically.

Then the first Ionian Academy (University) was founded. 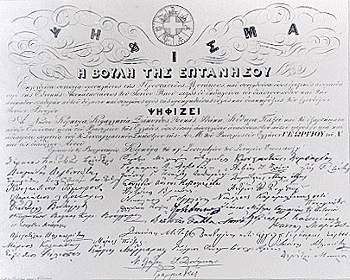 However, with the outbreak of the Russo-Turkish war, the Ionian State sided with the Russians, who were eventually be defeated.

The Ionian Islands were then occupied by the French for eight years, during which Liston was built in exact copy of Rivoli Street of Paris.

In 1815, with the founding of the United State of the Ionian Islands, Corfu remained for 49 years under English protection and no longer under the French.

In these years, the growth does not stop.

The English built the church of Agios Georgios and the barracks in the Old Fortress, as well as the building of the Provident (which is not preserved today).

During these years, many efforts were made by the Ionian Islands for their independence and union with the Greek State that emerged in 1827.

Finally, in 1863 a treaty was signed in London by the Great Powers according to which England renounced the protection of the Ionian Islands.

On May 21, 1864, the Ionian Islands officially became part of Greece and the Greek flag was hoisted at Corfu Castle.

The then Greek state with little experience and infrastructure tried to get as much as possible from the Ionian Islands with its rich tradition, history, experience and culture.

The Ionian Academy, despite the difficulties in achieving its goals, did not stop for more than 40 years its assistance in the development of our people and Greek state in its early years.