The ongoing joint exercises between Greek and U.S. forces, in the context of mutual defense cooperation between the two countries, irritated Turkey as can be seen from the government-controlled media.

The latest Greek-American exercise “IMMEDIATE RESPONSE / KENTAVROS 21”, which took place in Xanthi near the Turkish border, was targeted by Turkish newspapers, both for the American participation and for the presence two priests on the podium.

“With two priests and a handful of soldiers, they are challenging Turkey,” reads the headline from Haberler which noted: “The U.S. will set up four more bases in Greece.”

Ignoring that Greece and the U.S. are Turkey’s allies in NATO and that joint exercises are not directed against it, Turkish media systematically try to present them as targeting them.

Among other things, the publication wrote:

“It was presented to the press that the American army will set up new bases in Greece.

“The U.S. military, which will be stationed at four more bases, conducted an exercise in Kavala, near western Thrace.

“In photos from the exercise between the soldiers you can also see priests.

“As reason for the U.S. preference for Greece, problems in the relations between Turkey and the U.S. were pointed out,” it stated. 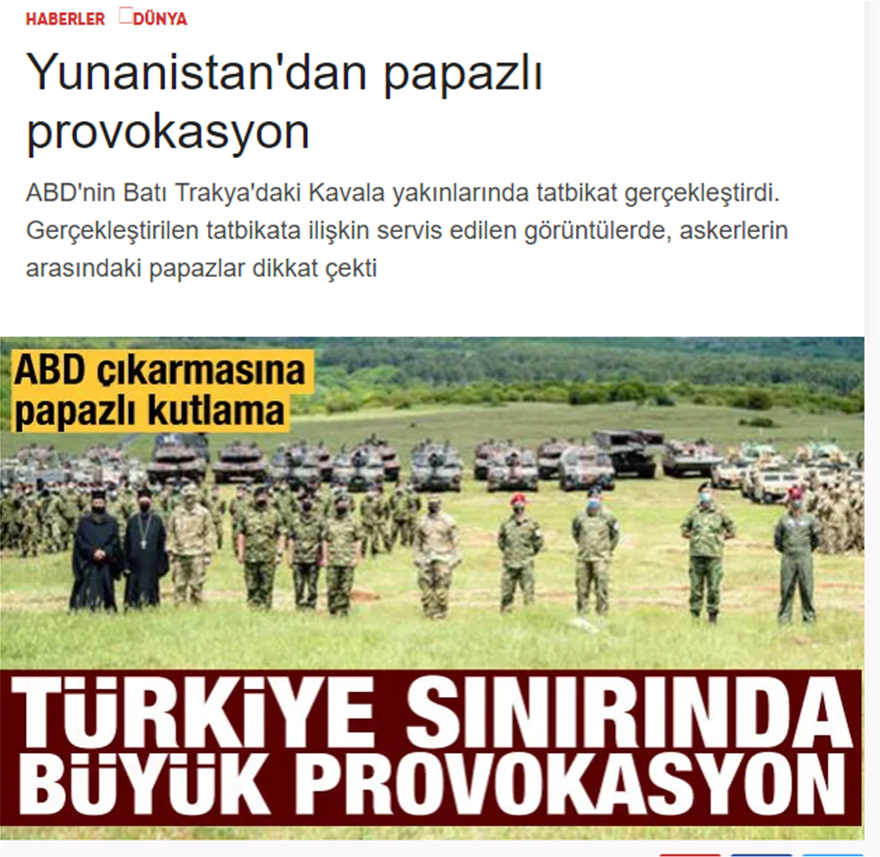 The article deals with the possibility of new U.S. bases on Greek soil, in the context of Greece-U.S. defense cooperation.

“The American army that is challenging Turkey will be stationed in Skyros, which is located in the middle of the Aegean Sea.

“The American army, which in parallel with Souda base in Crete, also uses the port of Alexandroupolis, is landing fighter jets in Larissa and Stefanovikeio.”

Four more bases will reportedly be given to the U.S. and the Greek Ministry of Defense will submit 22 options to the Pentagon.

According to Milliet, for the American special forces stationed at Souda Bay in Crete, Rentina, which is located near Thessaloniki, is projected as an alternative.