Turkish Foreign Minister Mevlüt Çavuşoğlu is expected to raise the issue of the “Turkish” minority in Thrace, and the protection of its rights by the Greek authorities, during his visit to Athens next Monday.

According to Turkish press reports, the head of Turkish diplomacy will try to avoid what happened in the last episodic meeting with Greek Foreign Minister Nikos Dendias in Ankara in the middle of last April. 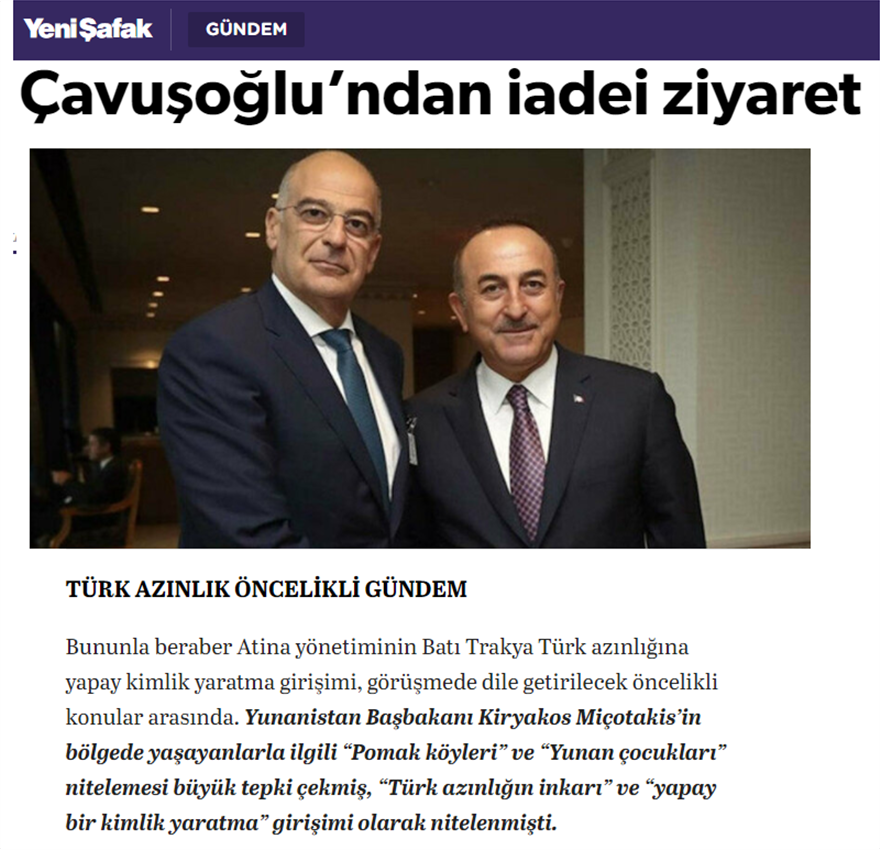 According to the pro-government Yeni Şafak newspaper, which first revealed Çavuşoğlu’s trip to Greece on May 31, said one of the main issues to be raised is that of the Muslim minority in Thrace.

Turkey will try to re-emerge as a “protector” of the Muslim minorities rights, insistently provoking their identity as “Turkish.”

The Pomaks are Slavic-speaking Greek Muslims that Turkey incorrect calls “Turkish” and make up nearly half of the entire Muslim population in Thrace.

“Among the issues that will be raised as a priority at the meeting will be the attempt of the Athens government to create a false identity for the Turkish minority in western Thrace,” the Turkish newspaper wrote.

The Greek side is completely ready to give public answers again, if it is provoked, on the issue of the minority, with reference to the Treaty of Lausanne.

Turkish President Recep Tayyip Erdoğan had officially raised the issue of the “Turkish” minority again from Athens during his visit in 2017.

Turkey’s own Foreign Ministry website affirms that there is only officially a Muslim minority in Western Thrace via the Treaty of Lausanne Part VI Article 2, that states:

“Moslems established in the region to the east of the frontier line laid down in 1918 by the Treaty of Bucharest shall be considered as Moslem inhabitants of Western Thrace.”

Finally, Yeni Şafak notes that: “the tension that escalated in Ankara is not expected to appear in Athens” again.

It is recalled that Dendias humiliated Çavuşoğlu last month when he again tried to bring up the issue of a “Turkish minority” in Greece.

READ MORE: How Greece reacted to Dendias’ humbling of Çavuşoğlu in Ankara.

Bahçeli to Mitsotakis: Pomaks are Turks, Greece is fascist