From Areopoli in the Mani region of the Peloponnese, Dimitrios Kalapothakis (1865-May 27, 1921) was a journalist, writer and founding member of the Macedonian Committee, which played an integral role in the liberation of Macedonia and its unity with Greece.

Kalapothakis was a student at the University of Athens when Greece liberated Thessaly in 1881.

At the time he decided to leave University and travelled to Volos, where he started the newspaper Simaia.

He would later establish another newspaper by the name of Empros and would become the most important figure of the Greek press and an influential reporter of Greek politics. 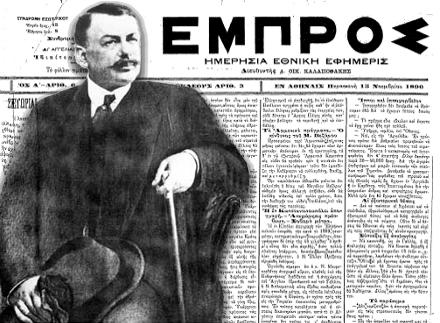 In 1903, he would form the Macedonian Committee, who’s emblem included Alexander the Great and Basil the Bulgar Slayer, in an effort to combat the Bulgarian propaganda and terrorism in the region.

Kalapothakis used his own personal wealth to organise fighters to travel from the Peloponnese and Crete, to join up with the Macedonians, while also providing them with weapons and supplies.

The ensuing Macedonian Struggle (1904-08) dealt a heavy blow to Bulgaria’s aspirations in Macedonia and by 1913, the Turks were also ousted.

Macedonia would be free and re-united with the rest of the Greece.

READ MORE: Greek President: “The selfless heroism of Pavlos Melas is a source of inspiration for all of us.”