Azerbaijan’s recent encroachments on the territorial integrity of Armenia, already leading to human casualty, the capture of six Armenian servicemen and the seizure of sovereign territories of Armenia, has been condemned by individual governments and various international organizations in recent days.

The main issue that needs to be clarified is: how Russia – the strategic ally of Armenia, as well as the Collective Security Treaty Organization, to which Armenia applied in expectation of receiving politico-military assistance – does not intervene to prevent aggression from Azerbaijan and resolve the conflict between the countries.

The answer to this lies in the context of Russia’s traditional policy in the Caucasus and other regions, which implies a simple mechanism.

In competition with the Ottoman Empire, the Russian Tsar always used the persecution of the Christians living in border areas – Armenians, Greeks, Georgians and other nations.

Sometimes tsars themselves artificially created these persecutions for the benefit of the Russian state.

As a result, the tsar got the right to intervene in the affairs of separate regions with the “messiah aureole” on his head and “free” the younger Christian brothers from the sword of the Ottoman sultan.

This mechanism was already staging an improved performance both within Russia and in the interjacent regions of interests with Turkey, such as the South Caucasus in 1918-1921.

Firstly, an agreement was struck with a power source in the Caucasus to carry out aggression against the target object. At the same time, Russia acted restrictively and destructively in various ways, including special services, against the target.

This way Russia was able to neutralize any units displaying certain subjectivity or performing under the auspices of other centres, as well as bringing its relations with Turkey into balance.

Russia applied the aforementioned mechanism more than once, especially in the Caucasus. But that mechanism has left the very Armenian nation with irreparable repercussions.

The Lenin-Ataturk deal of 1920, which in fact was the prelude to the “Molotov-Ribbentrop” pact, cost the Armenian nation the loss of a huge homeland and the sacred Mount Ararat.

The Artsakh (Nagorno-Karabakh) war in 2020 was another example of the performance of that mechanism, resulting in the dismemberment of the unrecognized (by other countries) but independent Artsakh, and creating a Russian-Turkish monitoring center on its border to control the movement of Armenian troops. 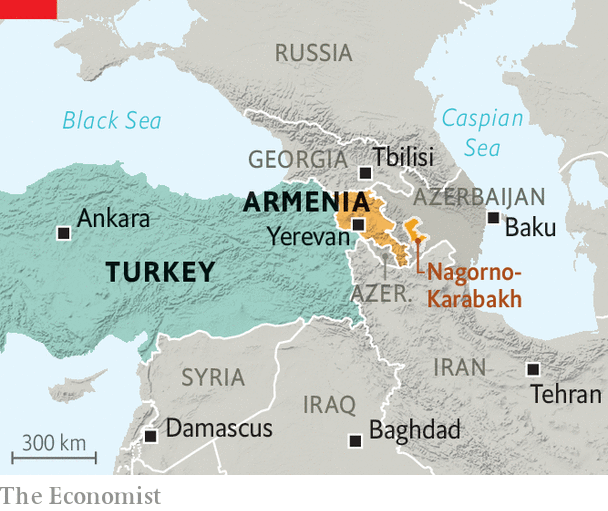 Today the aforementioned mechanism has found application against the sovereign territory of the Republic of Armenia too.

The only innovation in this mechanism is that the Kremlin has “tied the hands” of the Armenian Army by the tripartite (leaders of Azerbaijan, Armenia and Russia) ceasefire statement of 2020 November 9, according to which Russia is the guarantor of the ceasefire with the right to punishment in ceasefire violation cases.

It is already evident that Russia is ignoring the actions of the Azerbaijani military troops in the territory of Armenia, thus exposing the existence of their agreements with Baku.

By the way, Azerbaijani military forces follow a well-designed strategy of avoiding the use of combat weapons.

The Azerbaijani tactics are the following: they infiltrate the unguarded or poorly guarded, not-delimited and the not-demarcated line stretching for hundreds of kilometres and use the mountain trails to reach a strategic height and put down roots there. The military authorities of the Armenian Army have announced a number of times that the political leadership of Armenia does not allow the use of military force against such bases.

That is because the Kremlin has promised to assess such a step as a violation of the November 9 ceasefire document by Armenia and a legitimate “casus belli” for Azerbaijan to declare war.

Thus, Armenia has found itself in the trap laid by the traditional Russian policy and is forced to apply to the Kremlin for help to solve the problem of making Azerbaijan leave the sovereign territories of Armenia, but a certain price made be paid to Russia.

Today, the price Moscow wants is the control of communications passing through the Armenian region Syunik.

It is important to underline that if the communications remain under Armenian control, Syunik preserves its role as the wedge dividing the Turkish world into two parts, from Altai to the Balkans, and also the wedge separating Russia from Turkey.

The traditional  Russian policy of “messiah” that is being applied in Armenia these days is aimed at establishing a new role for Syunik – to bring that wedge dividing the Turkish world into the Kremlin’s control, positioning border control points of Border Service of the Federal Security Service of the Russian Federation (PS FSB Rossii) on the 40 km length Meghri corridor, as well as eventually removing the question of the wedge between Russia and Turkey from the political agenda.

The RA government has already provided the territories for PS FSB points by the Government decision on  May 27, 2021.

However, the Armenian nation hopes to find a way out of these consecutive Russian-Turkish pliers as despite imposing Russian and Turkish agreements on Armenia, despite keeping Armenian political parties and government under external control, there are many non-partisan layers of society and political units ready and currently fighting for Armenia’s sovereignty and territorial integrity.

Saro Saroyan is a political scientist with 20+ years of experience in the public and private sectors. He is a member of the Armenian Network State movement.