At the invitation of Greek Foriegn Minister Nikos Dendias, his Indian counterpart Subrahmanyam Jaishankar arrived in Greece yesterday and will leave tomorrow.

On the occasion of the 200th anniversary of Greek independence, Jaishankar conveyed felicitations of the President and the Prime Minister of India to Greece.

During the visit, Jaishankar met with Prime Minister Kyriakos Mitsotakis and had bilateral talks with his counterpart Dendias.

A statue of Mahatma Gandhi was also unveiled in Athens today.  The statue will act as a strong symbol of friendship between the two countries.

In a joint press release, it was stressed that India and Greece enjoy close and friendly relations which is strengthened by the shared values of democracy, rule of law, pluralism, equality, freedom of speech and respect for human rights.

Both sides had a comprehensive exchange of views on further consolidating the bilateral relations, which continue to deepen and expand rapidly.

They also noted with satisfaction the ongoing cooperation in several areas, such as, trade and investment, science and technology, culture, academia and people-to-people contact and agreed to work together to further enhance collaboration in these areas.

It was also agreed that the next round of Foreign Office Consultations and Joint Trade Committee would be held soon.  Both sides also agreed to work towards the establishment of a Strategic Partnership.

The Greek Foreign Minister signed and handed over the Agreement on the International Solar Alliance (ISA) to the Indian side and Jaishankar welcomed Greece to the family of the ISA. 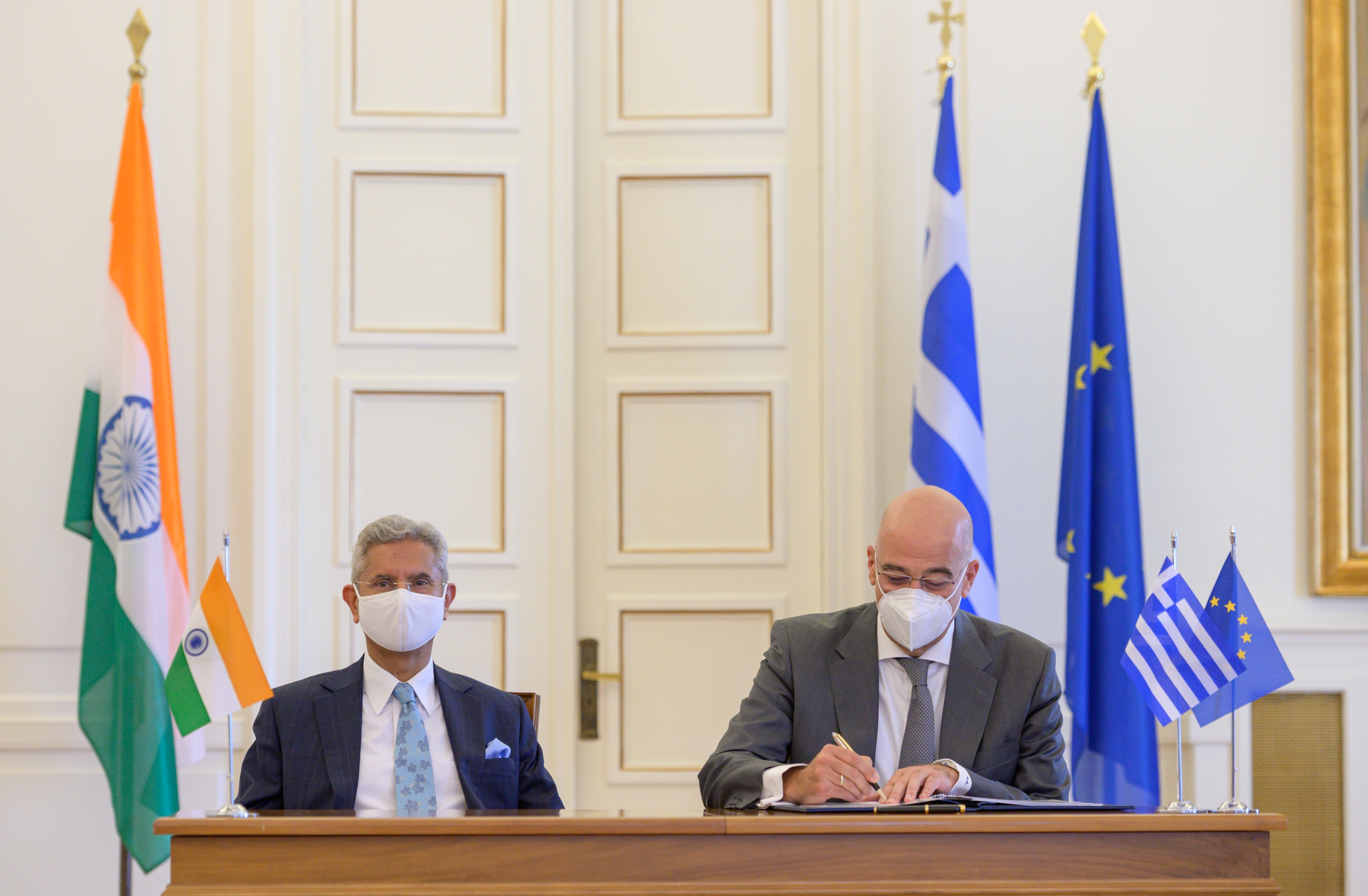 Both sides agreed that this will assist the two countries in realisation of the energy goals set by the respective governments to make renewable energy a significant part of the energy supply.

In the globalised world, both sides noted the importance of movement of people in an orderly and legal way and agreed to work towards and signing an agreement on migration and mobility.

Considering their rich ancient past, the two sides agreed to continue their relationship in the field of culture. Both sides reiterated the importance of signing the Cultural Exchange Programme for the period 2021-2025 at an early date.

Both sides also shared views on regional and global issues of mutual interest in the context of new geopolitical and geoeconomic realities, including the Indo-Pacific. 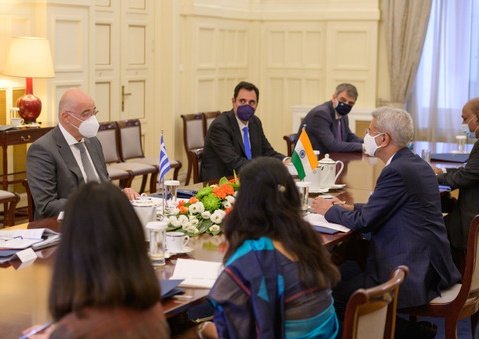 They noted with satisfaction the convergence of each-others’ vision for a free, open, inclusive and cooperative Indo-Pacific ensuring connectivity and growth for all in the region.

They agreed that the rule of law and respect for sovereignty, sovereign rights and territorial integrity in accordance with international law, are fundamental principles of international relations that must be observed by all.

Both countries recognised the threat posed by radicalisation, violent extremism, as well as terrorism, including cross border terrorism. They emphasised that there can be no justification for these in any form or manifestation.

Jaishankar and Dendias conveyed their deep commitment to multilateralism, and a rules-based international order. 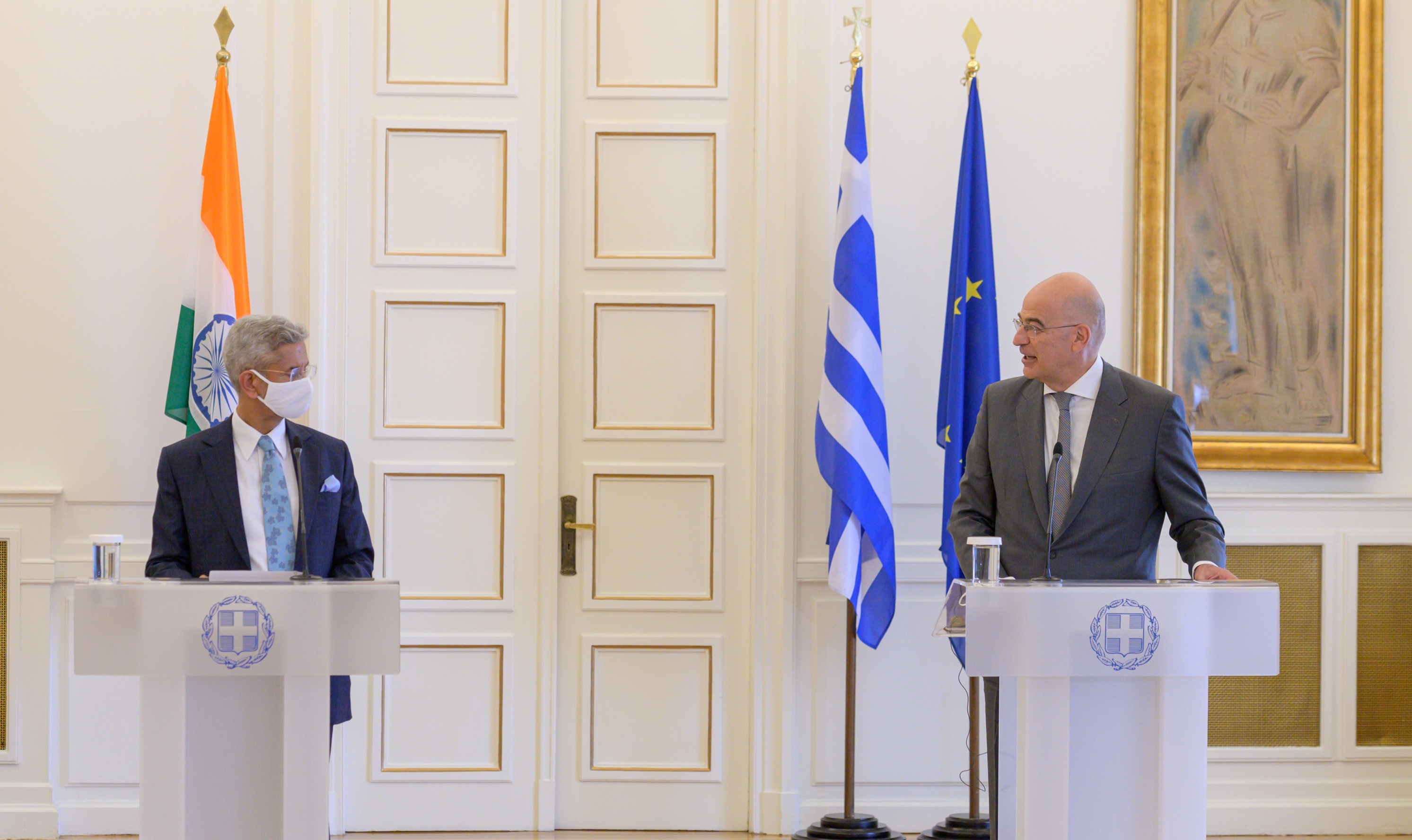 They also reaffirmed the importance of the urgent reform of the UN, including UNSC expansion, and other multilateral institutions so as to make them more inclusive, transparent, accountable, and better reflective of contemporary geopolitical realities.

The two foreign ministers discussed the COVID-19 situation globally and the process of economic recovery.

They agreed on the need for joint efforts to combat the disease and to work together for consolidating economic and commercial activities during and immediately after the pandemic.

The Indian side expressed gratitude for the warm hospitality extended to them by the Greek side. The Indian side extended an invitation to Foreign Minister of Greece to visit India at a mutually convenient date.

READ MORE: Indian FM meets Mitsotakis: It’s a privilege to be in Greece for its 200 year independence anniversary.

On this Day the Second Siege of Rhodes 1522