Cihat Yaycı called for an end to the dialogue between Greece and Turkey.

The theorist of the “Blue Homeland” – and “father” of the illegal Turkish-Libyan memorandum – retired Admiral Cihat Yaycı, demands an end to the dialogue after accusing Athens of constantly “slandering” Ankara.

Following the statement by Greek Defence Minister Nikos Panagiotopoulos that “Turkey threatens the peace in the region”, the head of the Center for Naval and Strategic Studies at the Bahçeşehir University of Istanbul, said in an interview that dialogue between the two countries should end “because of Greek arrogance and rhetoric that cannot,” according to him, “be accepted by the Turkish public opinion.”

Speaking to Turkish newspaper Milli Gazete, Yaycı accused Greece of rhetoricthat sees “tensions are rising in the Sea of ​​Islands,” as he calls the Aegean Sea, and in the Eastern Mediterranean” 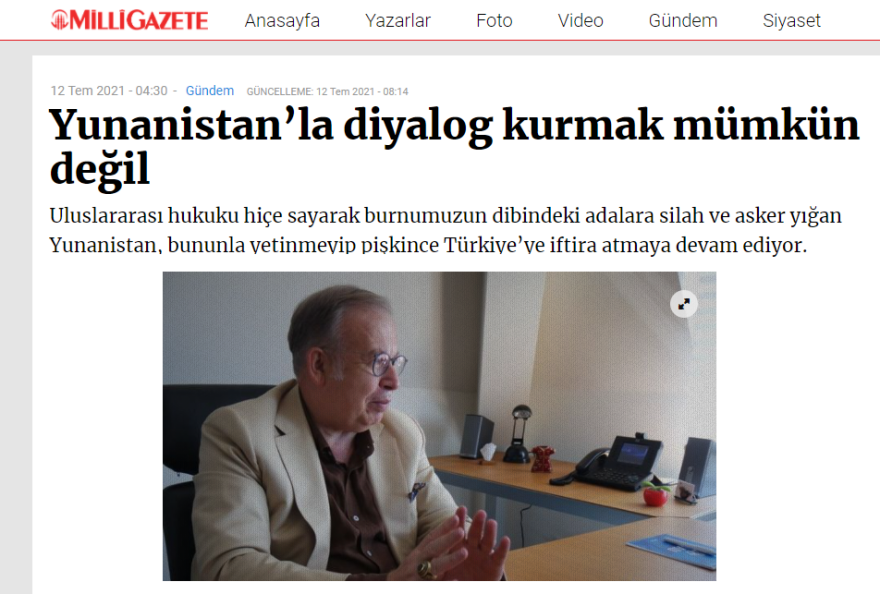 Recalling the popular saying: “The thief shouts to frighten the householder,” the “father” of the illegal Turkish-Libyan memorandum, accuses Greece of “illegal demands and activities in the Eastern Mediterranean.”

“It is important that we continue to defend our national interests in the Eastern Mediterranean and in the ‘Sea of ​​Islands’, without compromising our sovereign rights.

“Turkey is in a very good position both in terms of diplomatic power and strategic opportunities.

“Realising that it cannot face our power, Greece is trying to challenge Turkey. This attitude and style of Panagiotopoulos show once again that it is impossible to develop a healthy dialogue and diplomacy with Greece under these conditions.

“Turkey will show the necessary response in the Eastern Mediterranean, defending its sovereign rights in every sense of the word,” Yaycı said provocatively.

Greece to become observer member of the Arab League