Under the headline “Greece loses sovereignty over 21 armed islands”, Turkish pro-government newspaper Sözcü quoted retired Admiral Can Erenoğlu saying that Greece, in violation of international conditions in the Aegean Sea, is in danger of losing them.

Erenoğlu even claimed, without this having any valid basis, that Greece can lose the sovereignty of specific islands by wrongly interpreting international agreements and the International Law, as Turkey is methodically accustomed to .

“Greece may lose its sovereignty over the islands it has equipped. We must raise this issue frequently with the United Nations and NATO,” Erenoğlu said.

He said Turkey’s recent letter to the Secretary-General was “delayed” and accused Greece of “continuous blatant violations” in the Aegean and the Mediterranean. 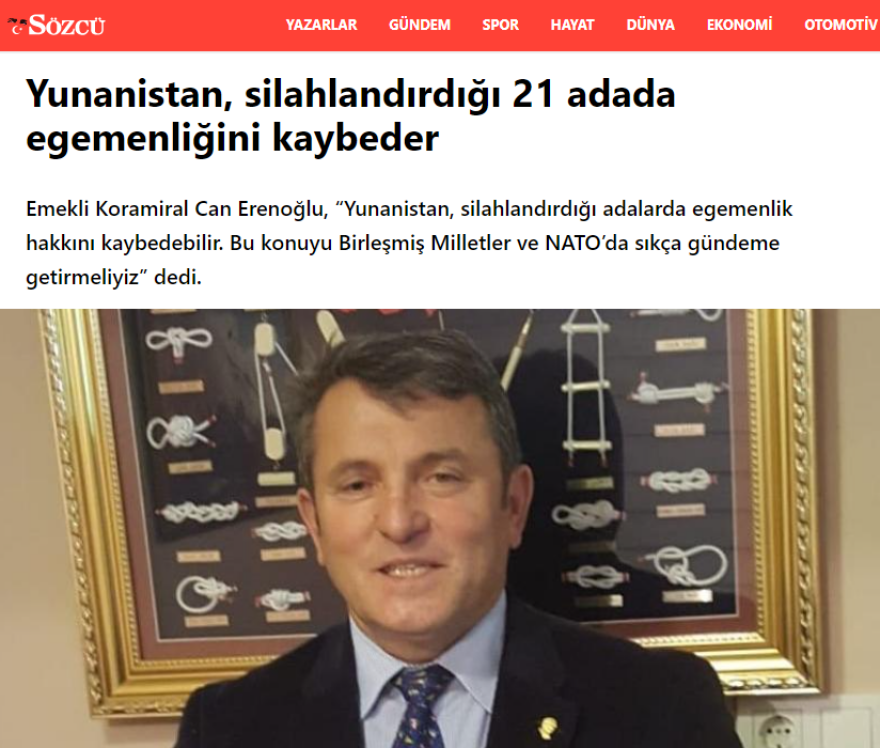 “The [military] equipment on the islands violates international treaties,” the article said, recalling the casus belli Turkey has declared if Greece extends its territorial waters to 12 nm in the Aegean as it has a legal right to do.

“The islands and islets do not have a continental shelf if the conditions are not observed.

“By violating the law, Greece also loses its sovereignty over these islands.

“Greece wants this issue to be excluded from the jurisdiction of the International Court of Justice, saying that the only difference with Turkey is the continental shelf.”

Erenoğlu, who also served in the Turkish General Staff, has previously participated in seven meetings with Greece.

He provocatively claimed that the problems in the Aegean “come from Greece” and are not “Turkish-Greek problems”, while he stressed that: “the only enemy for Greece is Turkey.”