Terror reins in territories of Afghanistan that the Taliban have brought under their control as they distribute leaflets re-introducing dark Islamist customs designed to denigrate women.

The content of the leaflets is the same as those the Taliban imposed on Afghans when they last usurped power in 1996. Taliban restrictions are evoking a sense of both déjà vu and fear among the locals.

The primary restriction is about ordering women not to leave their houses without a male companion, and after covering themselves with a burqa from head to foot. They have also come up with new dowry regulations for girls.

Some Taliban are ordering girls aged 15 and above to be provided to them as wives. A few other groups are forcing girls and women from watching television or using cell phones.

For males, the Taliban decree asks them not to shave or trim their beards. Salons are being asked to close down in the districts where the Taliban currently hold sway.

The restrictions are being advertised in mosques during the Friday sermons, with the Mullahs insisting that Shariah law must be followed.

A measure of the Taliban influence can also be gauged by the fact that local radio stations are being forced to broadcast Islamist chants, called “Taliban Tarani”, along with messages critical of the Afghan government.

Playing of music is being banned.

The Human Rights Watch says the Taliban crackdown on women is not “surprising” as the policies of the Taliban have not changed since 2001.

Senior researcher Heather Barr is quoted by the media as saying: “It is very concerning indeed for human rights and some of these abusive attitudes are actually intensifying as they are feeling triumphant in gaining control of more and more territory.”

Acting U.S. ambassador to Afghanistan Ross Wilson tweeted that the Taliban were violating human rights, triggering fears that “a system this country’s citizens do not support will be imposed”.

(2/2) We call on the Taliban to negotiate in good faith and with a genuine will to bring about a political settlement and a permanent end to fighting. #CeasefireNow

When the Taliban were negotiating a peace agreement in Doha with the United States early last year, they had promised to change their policies and not stick to regressive Islamist principles.

However, with the Americans in the process of withdrawing from the country and the Taliban taking control of more and more territories by force, they have changed their tune.

Afghan women are expecting fresh decrees any day to bar girls from going to school and women from working outside their homes.

The Taliban are already working on introducing the religious place to keep a watch for violators. In the past, women who failed to obey the diktats (a decree imposed by someone in power without popular consent) were publicly humiliated and even punished.

A report from the country’s north-western province of Faryab says the Islamist militants set fire to a girls’ school at night, burning down the building and the library along with it.

They shot at people who tried to put out the fire.

Human rights groups have been working in Afghanistan ever since the Americans threw out the Taliban from power in 2001 to improve the rights of women and girls and bring them out of the regressive lifestyle forced on them.

Over three million girls are enrolled in schools in the country to date.

They are joining the armed forces or setting up their own businesses.

The activist groups still have a long way to go as over two million girls still do not go to school. The worry is about their fate now that the Taliban are back on the war path.

The Guardian recently reported an extraordinary situation in small towns in northern and central Afghanistan where Afghan women are taking up arms and marching in the streets to show their defiance and assert that they will not bow down to the Islamist laws.

A large demonstration was organised in the province of Ghor where hundreds of women waved guns and chanted anti-Taliban slogans as they marched in the streets.

The Guardian report quoted Halima Parastish, head of the women’s directorate in Ghor and a marcher herself:

“There were some women who just wanted to inspire security forces, just symbolic, but many more were ready to go to the battlefields.

“I and some other women told the governor around a month ago that we’re ready to go and fight.”

Many of these women underwent weapons training for a day before taking part in the march. 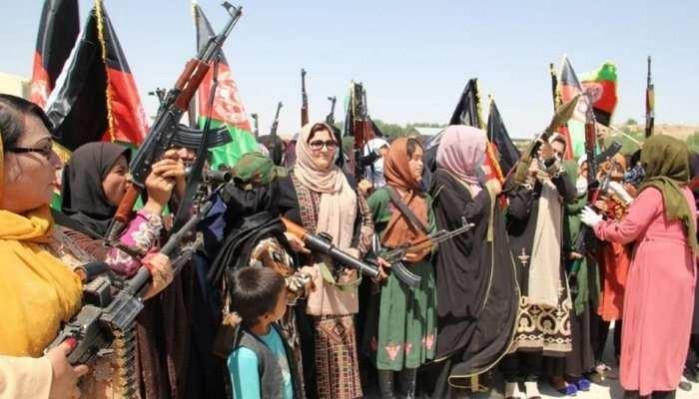 They were quoted as telling fellow-marchers: “I don’t want the country under the control of people who treat women the way they do. We took up the guns to show if we have to fight, we will.”

But why take up arms?

They see it as the ultimate insult, as well as an embarrassment. They are said to be virtually frightened of dying at the hands of women.

There are sporadic reports of women handling weapons and fighting the Taliban. The one that made news globally was about a girl, Qamar Gul, who fought off a group of Taliban, including her husband, who had murdered her parents.

Tsipras: Mykonos is an example of the government's total failure