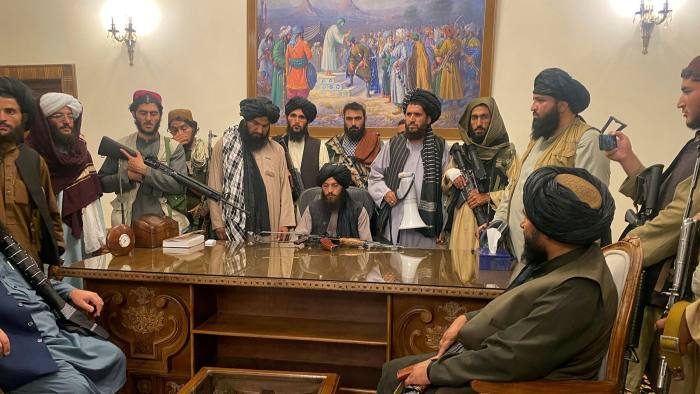 The capture of these cities was through a lightning campaign by the Taliban, especially rapid when we consider that the Biden Administration pledged to withdraw most of its armed forces from Afghanistan before August 31. It appears that despite the pledge, the Taliban has wasted no time in controlling the overwhelming majority of the country.

U.S. occupation began as a campaign of supposed revenge against the perpetrators of the 9/11 terrorist attack, but it has now descended into utter chaos and failure for the U.S., especially if we consider that over 3,562 Coalition lives (2,420 Americans) have been taken because of the war. What began as a war to destroy Al-Qaeda training camps in Afghanistan and remove from power those that supported them, saw the U.S. only a decade later rely on those very same ideologues to try and remove Bashar al-Assad from power in Syria after having Muammar Gaddafi slaughtered in Libya.

The Watson Institution at Brown University found that the estimated amount of direct Afghanistan and Iraq war costs that the U.S. has debt-financed as of 2020, totals to about $2 trillion. It is estimated that the interest costs by 2050 can amount up to $6.5 trillion. With over 200,000 people killed in the course of twenty years, and trillions spent in Afghanistan, it brings to question why the U.S. government for years held secret and official talks with the Taliban without the presence of the official government of Afghanistan, which was supposedly an ally of the U.S.

According to Dr. Emad Abshna, it is clear that the Americans had made agreements with the Taliban behind the scenes and only needed to withdraw their troops to avoid the chaos. Former Afghan Ambassador to Greece and former Minister of Culture, Omar Sultan, said: “I believe the U.S. made an agreement with the Taliban in the absence of the Afghan government. An agreement that no one knows the details of, otherwise this would not happen.”

It is widely believed that the U.S. made a deal with the Taliban. Although only speculative for now, it is not a long stretch to imagine that such a deal would have included the immensely profitable opioid industry in Afghanistan, something that the CIA profited from immensely and is unlikely to willingly give up so easily. However, the murkier aspects of the deal will likely be glossed over by critics if the Biden administration can convince the Taliban to allow extra freedoms for people that they did not allow during their previous stint in power. In this way, it can appear that Biden has secured some societal progress in Afghanistan to justify why now was the right time to withdraw from the country.

It is likely that George W. Bush, who was president during the height of the U.S. unipolar world order, anticipated an easy takeover of Afghanistan to force open an entryway into resource rich Central Asia. This was at a time when Russia was still recovering from the chaos of the 1990’s and China was not as economically developed and competitive.

The decision to invade Afghanistan would prove to be one of the biggest failures of the U.S. in many decades as it not only wasted trillions of dollars and hundreds of thousands of lives, but also because it failed to gain a foothold into Central Asia. In the twenty years since the occupation began, not only has Russia stabilized since the collapse of European communism and rejuvenated its military, but China is now the largest economic threat to the U.S.’ stranglehold on the global economy. Both Russia and China are in prime position to exploit the resources of Central Asia, a region the U.S. is effectively locked out of now.

In this way, the U.S. is cynically and rapidly withdrawing from Afghanistan knowing full well that nothing was achieved in terms of geopolitics. Washington likely hopes that by withdrawing in such a manner, the Taliban and other jihadist groups will fight each other to fill the vacuum, and thus destabilize the entire region. However, even this could prove to be a failure if the deteriorating situation in Afghanistan can be contained within its borders and if Russia and China similarly make a deal with the Taliban, just like the U.S. has likely done in secret.

Mitarachi: Greece is no longer experiencing a migration crisis