On 8 July president Biden assured the press, ‘The likelihood there’s going to be the Taliban overrunning everything and owning the whole country is highly unlikely.’

Later that month, General Mark Milley, Chairman of the Joint Chiefs of Staff declared, ‘The Afghan Security Forces have the capacity to sufficiently fight and defend their country, and we will continue to support the Afghan Security Forces where necessary in accordance with the guidance from the president and the secretary of defense.’ Last Thursday American intelligence officials warned that Kabul could fall within 60-90 days. It took the Taliban less than a week to roll into Kabul.

As the Taliban offensive drove ever closer to Kabul the Biden Administration sprung into action. White House spokeswoman Jen Psaki roundly condemned the Taliban, ‘If the Taliban claim to want international legitimacy, these actions are not going to get them the legitimacy they seek,’ State Department spokesman Ned Price fired a supportive volley, stating that the U.S. and a ‘broad’ and ‘inclusive’ group of nations believed the ‘peace process’ must continue, ‘And they also agreed, importantly, that they will not recognize any government that is imposed through military force.’

The European Union added its voice to the deluge of condemnatory fire. Spokesman Josep Borrel warned, ‘If power is taken by force and an Islamic Emirate re-established, the Taliban would face non-recognition, isolation, lack of international support and the prospect of continued conflict and protracted instability in Afghanistan.’ At the UN, Norway and Estonia worked on a Security Council resolution saying the council ‘strongly affirms that the Islamic Emirate of Afghanistan is not recognized at the United Nations and declares that it does not and will not support the establishment of any government in Afghanistan imposed through military force or restoration of the Islamic Emirate of Afghanistan.’ The verbal barrage did not slow the Taliban’s advance.

With words being the most potent weapon in America’s arsenal, on Tuesday President Biden returned from Camp David to address the nation from the White House’s East Room. In an 18 minute speech, Biden briefly recapped America’s long war in Afghanistan. He said he inherited a peace deal from President Trump and pointed out that Trump had drawn down the American military presence there from more than 15,000 troops to just over 2,000. ‘I stand squarely behind my decision,’ the president said. Biden admitted that, ‘The truth is this did unfold more quickly than we anticipated.’ He spent more than half the speech blaming the Afghani government and military for the Taliban’s victory. When finished, the president left the room without taking a single question and returned to Camp David.

Biden spent much of his speech arguing in favor of withdrawing from Afghanistan. But no one is really arguing that America should have stayed. Critics call Afghanistan the ‘forever war’. As this observer writes, there are American soldiers and marines at Hamid Karzai International Airport who are younger than the war. Most Americans feel that 20,000 plus wounded and 2218 dead Americans are enough. The United States spent an estimated $978 billion in Afghanistan over the last generation. That comes close to the cost of congress’s trillion-dollar infrastructure bill. For the cost of the Afghan war, America could have built a lot of roads, bridges and airports. 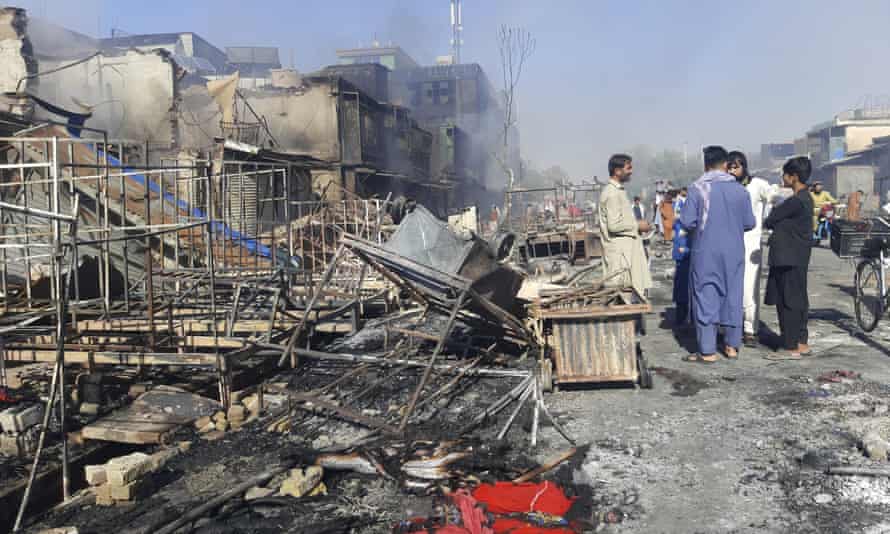 Biden’s speech left unanswered several questions. Why did the US not anticipate the speed and effectiveness of the Taliban offensive? Why were plans not made to evacuate the thousands of Americans still in Kabul? What about the tens of thousands of Afghans who worked with the United States over the last two decades? Americans are concerned with the manner of the withdrawal. A Morning Consult Poll released on 16 August showed only 25% of Americans ‘think the withdrawal from Afghanistan is going well.’ A Trafalgar Group survey found that 69% of Americans disapprove of Biden’s handling of the withdrawal.  Americans may want to leave Afghanistan, but nobody likes what’s they’re seeing on television.

The Afghanistan War involved four American administrations. President Bush made the decision to stay in Afghanistan after overthrowing the Taliban and destroying al-Qaida’s presence there. President Obama surged troop levels to over 100,000 in an effort to achieve a military victory. President Trump spent years drawing down the American troop presence in Afghanistan and negotiated with the Taliban without input from the Afghan government. Trump got Pakistan to release Taliban leader and cofounder Mullah Abdul Ghani from prison, where he had languished for eight years after being arrested in 2010.  Mullah Ghani may be the next leader of Afghanistan. Trump came to an agreement with the Taliban for a withdrawal date of 1 May, later extended by the Biden Administration. Were Trump still president he would have withdrawn from Afghanistan too. The American involvement in Afghanistan is a bipartisan saga.

William Stroock is a military observer and author of military fiction.