Tensions continue to rise in Ethiopia. The advance of Tigray’s rebel forces has become unstoppable. The Ethiopian government’s ceasefire has not been respected and the country’s future looks increasingly uncertain.

Now, the rebels have taken control of several foreign humanitarian aid warehouses, seizing important resources to guarantee social stability in the regions conquered by the militias – and, at the same time, taking away from the official government the possibility of helping the population, worsening a real crisis of legitimacy.

Recently, guerrillas from the Tigray region looted warehouses belonging to the US government’s humanitarian agency “USAID” in the Amhara region, according to information from US officials. The rebels did not respond to the accusations made by the Americans, neither confirming nor denying. In a recent interview, Sean Jones, Director of USAID stated: “We do have proof that several of our warehouses have been looted and completely emptied in the areas, particularly in Amhara, where TPLF soldiers have gone into (…) I do believe that the TPLF has been very opportunistic”.

The case needs to be carefully analyzed, as it exposes several faults on both sides, and is not just an “anti-humanitarian” attitude on the part of the rebels, as the USAID report implies.

The Ethiopian government led by Prime Minister Abiy Ahmed Ali has not been effective in controlling the serious humanitarian crisis that has affected the country since the beginning of the civil war.

The conflict broke out in November last year between Ethiopian regular troops and the Tigray People’s Liberation Front (TPLF), which controls the mountainous region in the north of the country. 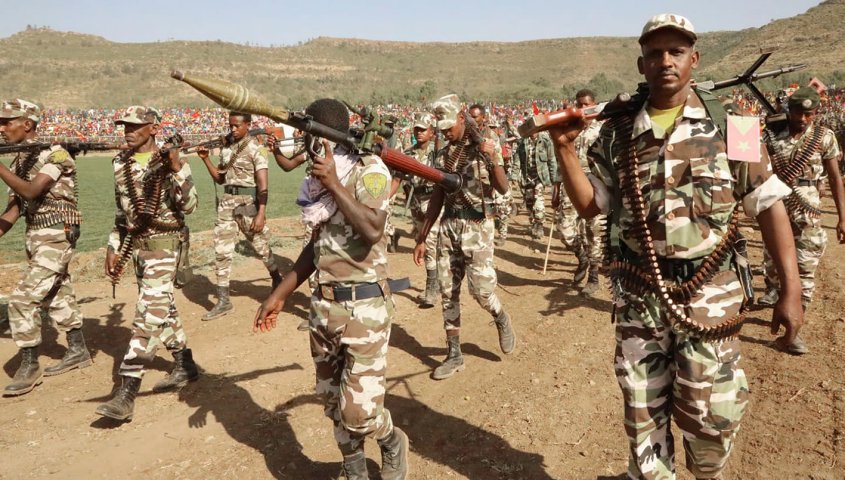 The rebels demand a series of changes in order to allow greater political participation to the people of Tigray. Ahmed accuses the region’s dissidents of trying to undermine the authority of the central government and for that reason he launched a strong military offensive at the end of last year, but he did not have enough strength to carry the conflict forward, suffering several defeats.

Tigray’s capital, Mekele, was taken by rebels a few months ago and Addis Ababa declared a “unilateral ceasefire” – which means an implicit recognition of defeat. However, Ahmed has compensated for his military incapacity with some humanitarian crimes, preventing the arrival of food, water, and basic services to the population of Tigray.

So far, the conflict has killed tens of thousands of people and generated millions of refugees, not only in Ethiopia, but also in neighboring countries that are also being hit by the clashes, such as Djibouti and Somalia.

The war has also led millions of people to misery and food shortage, which is why all humanitarian aid is welcomed by the population.

However, Ahmed continues to refuse to allow the aid received from abroad to reach the Tigray region and, in response, the rebels are starting to loot the warehouses that hold such aid.

With these factors, Ahmed is in a more and more complicated situation. His conduct generates a crisis of legitimacy that gives the rebels strength, drawing popular support for the TPLF because of his humanitarian indifference.

The prime minister has also generated real “disappointment” in international society, as he had been awarded with the Nobel Peace Prize in 2019 for having pacified his country’s relations with Eritrea, after twenty years of conflict and tensions – and now, Ahmed himself is the protagonist in a new conflict.

However, it should be noted that the war in Tigray is also a direct consequence of the act of appeasing relations with Eritrea, considering that the government of Isaias Afewerki is considered an enemy by the people of Tigray.

Afewerki has been implementing anti-humanitarian measures of persecution and ethnic extermination in the region for years and so the peace between Addis Ababa and Asmara is offensive to the TPLF.

Given the weakness of the African Union, it is unlikely that there will be a truly peaceful solution.

The problems of ethnic-territorial division on the African continent have for years led local states to extremely violent conflicts and this situation is really far from over.

In fact, the division of the African space in sovereign National States is still a recent and imperfect process, which is far from being compatible with the wide variety of ethnic and religious groups that inhabit that region.

The role of the African Union should be to foster mutual tolerance through sanctions against governments that violate basic norms of coexistence, but this is far from being a reality.

Unfortunately, given the history of conflicts in Africa, it is unlikely that there will be an end to the Ethiopian civil war until a new state is formed in Tigray or its population is totally wiped out through extermination and forced displacement.

Lucas Leiroz is research fellow in international law at the Federal University of Rio de Janeiro.

Greece donates more than a million vaccines to struggling Ethiopia