A ceremony held at the Athens Metropolitan Cathedral to bid farewell to the late composer and politician Mikis Theodorakis was concluded a few minutes before 16:00 on Wednesday, after a liturgy and eulogies read out by President of the Hellenic Republic Katerina Sakellaropoulou and the General Secretary of the Communist Party of Greece (KKE) Dimitris Koutsoumbas.

The coffin carrying the composer was then carried out of the cathedral amid applause and cries of “immortal” from a crowd of people that waited outside, in spite of the rain.

The body will now be taken by ferry to Crete, arriving at the port of Souda at 7:30 on Thursday morning. After a stop at the Chania municipal market, it will lie in state at the Cathedral of the Presentation of the Virgin Mary and then at 13:00 it will be taken to the Church of Agios Nikolaos in the village of Galata, where the funeral will be held.

The funeral will be held in a small family circle and observe all public health protocols, followed by the burial in the village cemetery near the composer’s father and brother, in accordance with his wishes.

President Sakellaropoulou: ‘He will always be here’

All ages and all generations today bid farewell “to the Greek and global, patriot and international Mikis Theodorakis,” said President of the Hellenic Republic Katerina Sakellaropoulou during her eulogy.

Saying goodbye on behalf of all Greeks, she noted that Theodorakis “will always be here, a flower that has sprouted in our mature memory” and that his “cultural and social intervention changed Greece and each one of us in a way that was more indirect but far deeper than we can today understand.”

Sakellaropoulou spoke of an exuberant, indomitable fighter who broke through the constraints of Greek defeatism and isolationism, joining the national with the universal to show a path toward forging the modern Greek identity.

“He gave us the priceless thread of his music to unravel and reach the clearing of democracy, turning his call into action and state, answering to our history,” Sakellaropoulou added.

The president spoke of the way his music had brought together Greece’s folk traditions, byzantine heritage, popular songs and modern innovations while noting that he had been a symbol of a responsible personal stance to the harsh demands of history, and a model of courage in expressing his beliefs, defying persecution, arrest, exile and disappointment.

“Mikis Theodorakis was present at every turn of our national adventure, always metabolising each historic moment through the traits of his special, strong personality, has left an indelible stamp on Greek life,” she said. 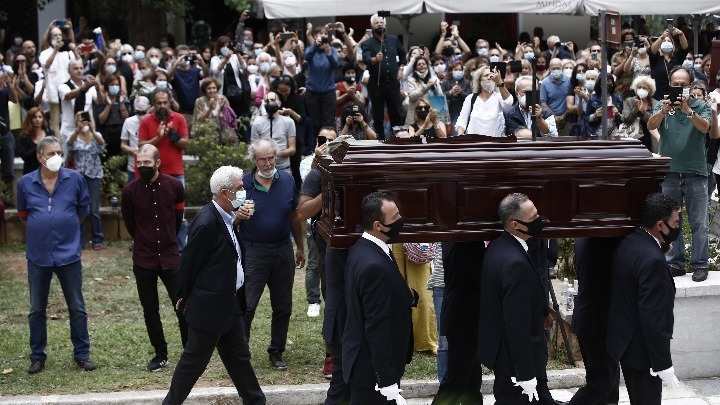 Koutsoubas: ‘Without you, we would have been different’

“Without you, we would have been different,” General Secretary of the Communist Party of Greece Dimitris Koutsoubas said characteristically during his speech at the farewell ceremony for late composer Mikis Theodorakis, held at Athens Metropolitan Cathedral on Wednesday afternoon.

Theodorakis “made people feel proud of their heritage, and feel admiration for those whose struggles honor the country and try to help it grow,” he stressed.

The party leader described Theodorakis as “Impulsive, revolutionary, inflamed with passion, while his music is a resolution that our world needs to change, and can change,” he underlined.

READ MORE: How Greece responded to the death of legendary composer Mikis Theodorakis.