Gordon Ramsay, Gino D’Acampo and Fred Sirieix will be back on ITV this autumn with a brand new road trip.

With a BAFTA-nomination and a TV Choice Award under their belts, the trio will return with their trusty RV.

This time around, Ramsay, D’Acampo and Sirieix will be hitting the beautiful Greek islands and historical city of Athens, for a big fat Greek adventure, together again behind the wheel on an epic odyssey like no other. 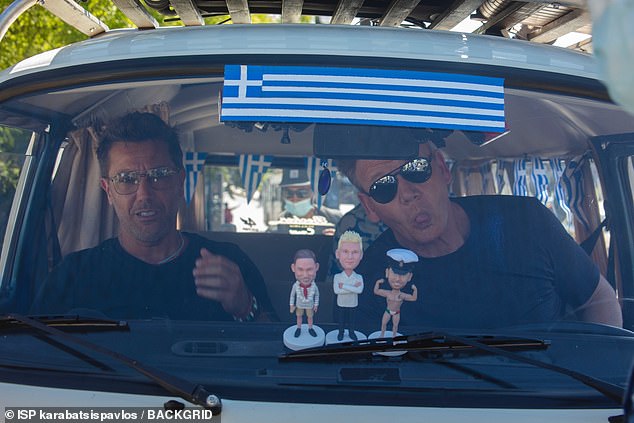 ITV tease: “From island hopping on a catamaran, to jet ski racing and shipwreck diving, there will be bromance and bickering in equal measure.”

“Thanks to an abundance of fantastic food, including the freshest lobster, chefs Gordon and Gino will be looking to prove that Greece’s culinary credentials are up there with the very best of Europe.

“The guys will begin their adventure in Crete, Greece’s largest island, before navigating their way to stunning Santorini, making their way to the party island of Mykonos and finishing their trip in the Greek capital Athens and the monasteries of Meteora.

“Travelling together in the birthplace of civilisation, what could possibly go wrong…?”

Gordon, Gino & Fred Go Greek will air on ITV this autumn in September with an exact start date to be confirmed.

ITV previously announced three more years of road trips from the trio, with series already confirmed for both 2022 and 2023.

There will also be new Christmas specials, with Ramsay saying: “Who knew when we headed out to Italy in the summer of 2018, I would find friends for life in Gino and Fred?”

Gino added: “I am absolutely delighted that I will be making more fantastic shows together with my friends, as this programme starts to go seriously global.”

And Fred enthused: “I can’t wait to get back on the road with my two amigos. The party will never end!”