Entitled "Athens Gives Islands to the Pentagon: Presence of Troops Violates Lausanne Treaty," the article by Turkish newspaper Yeni Şafak fantasises about American bases on the islands of Lemnos, Lesvos, Samothrace and Skyros.

"The US, which is building a military base in Alexandroupolis, 40km from Turkey, now wants the islands that surround the Dardanelles Straits," the pro-government newspaper wrote.

"The islands that the Pentagon wants to establish bases are Lemnos, Lesvos, Samothrace and Skyros," it said, adding: "Especially Lemnos will be used for US air operations."

The newspaper also falsely said that the islands are governed by a "civilian regime" and that the move violates the Lausanne Treaty. 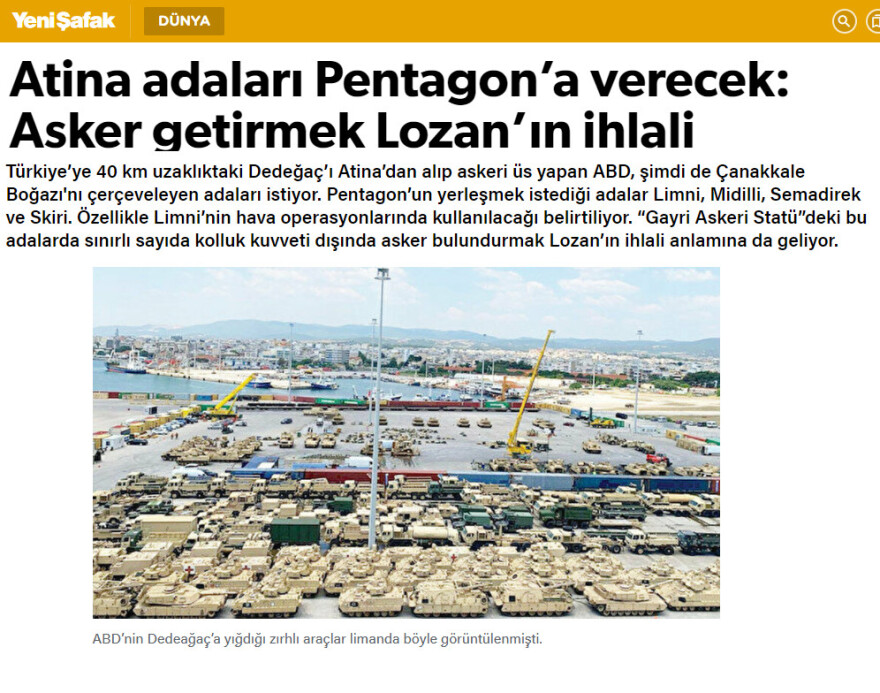 The report notes that the US has expanded the port of Alexandroupolis to make it a military base, docking large military ships, with the aim of intensifying the US presence in the Balkans, the Mediterranean and the Aegean, while controlling Russia and Turkey.

"After Alexandroupolis, the Pentagon targeted islands with military bases in Aegean islands, asking Greece to use them. These are islands with a civilian status, but they are armed by Greece," Yeni Şafak false said.

Yeni Şafak reiterated Turkey's firm position on the demilitarisation of the Aegean islands, noting that the growing military presence violates the Lausanne Treaty.

"Despite what is stated in the Treaty, Greece has gathered troops and weapons on these islands, although it has been warned several times by Turkey (…)

"With more than 10 NAVTEX's issued since September 2020, these violations have been highlighted and reported in twelve islands, including Lemnos, Lesvos and Samothrace, which are calling for their immediate demilitarization," the report concluded.