Over 20,000 Greek inhabitants of Chios were massacred by Ottoman troops during the Greek War of Independence.

Greek Prime Minister Kyriakos Mistotakis visited the Louvre Museum in Paris days ago and reflected on a painting of Chios Massacre. 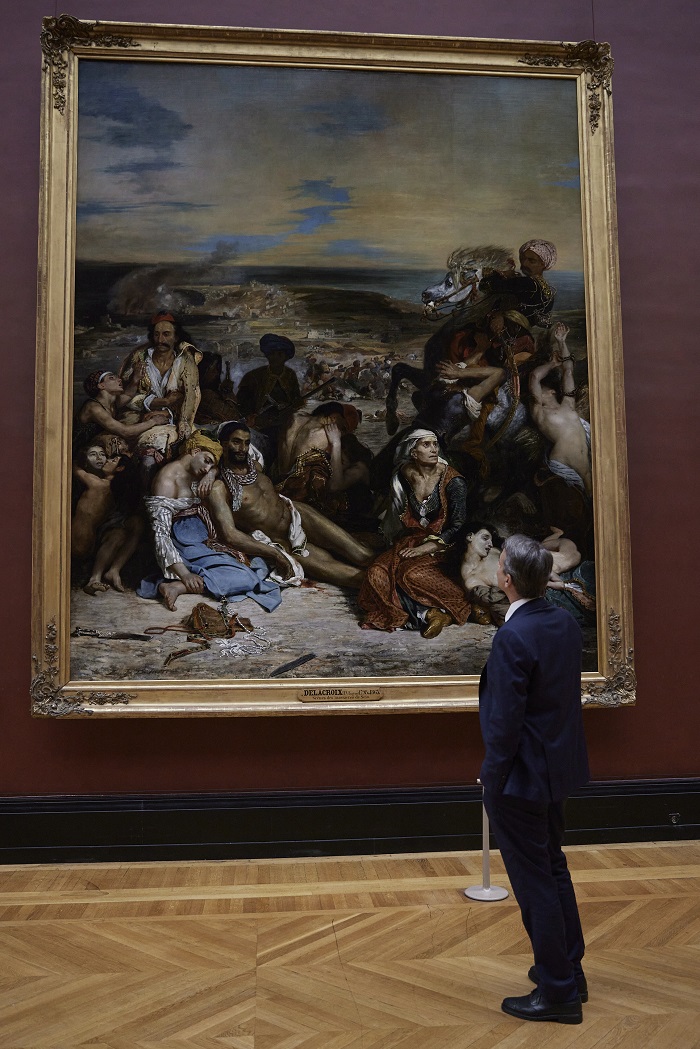 In 1822, European capitals were inundated with reports about a massacre against Christians in the Aegean, and the supposed birthplace of the ancient poet Homer, had become the scene of one of the bloodiest episodes of the Greek War of Independence.

At the time, Greece belonged to the Ottoman Empire.

Starting in March 1821, an armed uprising against the Sultan’s rule emerged in different places in Greece.

In the reconquest of Chios island in April 1822, Ottoman troops operated with extreme brutality.

They pillaged and plundered the Greek settlements, murdering an estimated 25,000 residents.

They also abducted more 45,000 people to the slave markets of the Ottoman Empire.

European reporting concentrated on the Ottoman atrocities against the Christian population, especially as the majority of islanders were killed and turned into slaves.

Such messages inspired French painter Eugène Delacroix to create his famous painting – “The Massacre of Chios.”

The painting presented in Parisian art galleries in 1824 caused a stir to the wider public.

The emotionally charged depiction of the Greeks, who had been at the mercy of the Ottoman soldiery, drew on a humanitarian narrative that had already more or less developed in the course of the campaigns against the slave trade.

With his visualisation of suffering, Delacroix intended to arouse the concern and sympathy of the viewers to the fate of the Greeks and thereby to mobilise political support for the Greek struggle for independence.

The events on Chios provoked (not least thanks to Delacroix’ painting) a sense of outrage throughout Europe and a feeling of solidarity with the Greeks striving for freedom.

The Philhellenism, which originated in the late 18th century from a cultural enthusiasm  for ancient Greece, now took on tremendous political relevance in the wake of the reporting of the massacre.

An act of revenge for the massacre would come three months later when a group, led by Konstantinos Kanaris, a native of Chios who had survived the massacre, returned and set fire to the Turkish fleet that was stationed in the port of Chios town.

They killed 2,000 Turks and destroyed every single Turk ship in the port.