From the town of Livadi on the border of Thessaly and Macedonia, Georgakis Olympios (March, 1772 - September, 1821) was a Greek fighter, Armotolos and military commander during the Greek War of Independence.

Olympios was initially part of the irregular forces active in and around Mt Olympus during the late 1700s, where he and others would protect Greek villagers from the constant Turkish raids and in doing so, attracting unwanted attention by the Turkish authorities.

As a result, he fled north to Serbia to escape the heat, before joining the Serbian Uprising against the Turks (1804). 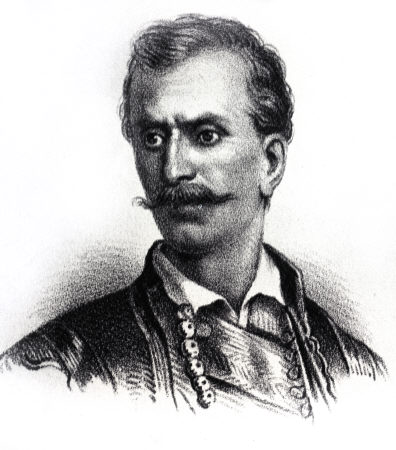 While there, he befriended Konstantinos Ypsilantis, the Prince of Wallachia (who’s two sons Alexandros and Dimitrios would play an important role in the Greek Revolution of 1821).

Discussions between the two ended in the creation of a military unit of Greeks to fight the Turks in the Russo-Turkish War (1806). It was here that Olympios, due to his efforts, was elevated to Colonel in the Russian Army.

By 1817, he was initiated into Filiki Eteria and by the beginning of the Greek War of Independence in 1821, he was a leader of Greek forces fighting in Moldavia and Wallachia.

He took part in the Battle of Skouleni, where he and his forces were greatly outnumbered.

Turkish forces chased him and his small force to Sekou Monastery, which is where they made their last stand.

Olympios died during the Ottoman attack on the monastery.

GREECE: Tram connection to port of Piraeus to launch next month