The presence of 15 American F-15 fighters in Larissa to participate in the Castle Forge exercise, is strongly projected in the Turkish media with conspiracy theories, as our neighbours have been accustomed to lately.

“Why did 15 F-15s land in Greece?” read a title by CNN Türk, citing that although the multinational exercise will be held within the US defense strategy in the Black Sea region, information from Greece made known that “American aircraft are for more than just exercises.” 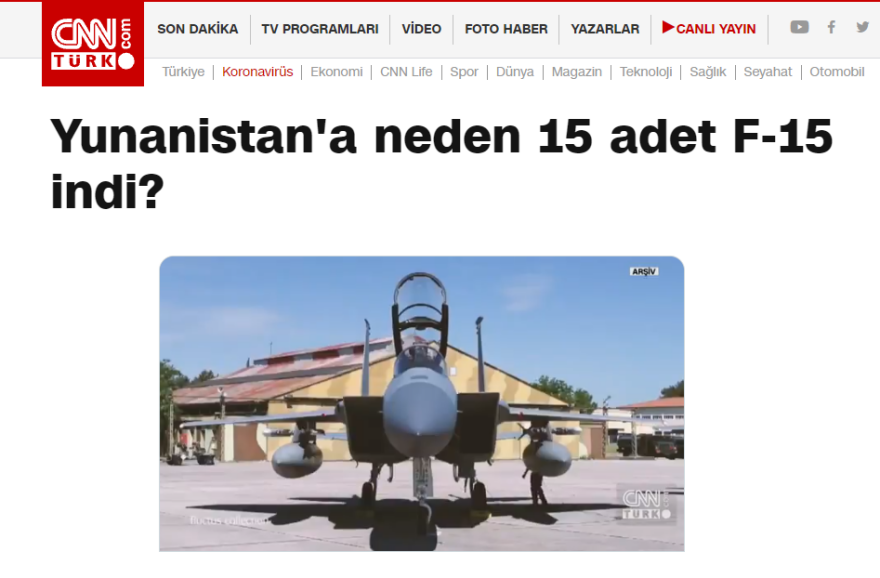 “Greece, which has entered into an alliance with France against Turkey, is preparing to sign a defence cooperation agreement with the United States. Before the agreement, 15 F-15 fighter jets came to Greece for exercises and joint training activities,” Haber 3 commented.

“The United States has sent 15 F-15s to Greece,” 24 TV reported, referring to an “alliance” aimed at harming Turkey’s interests in the Eastern Mediterranean.

“Greece seeks protection from France and the United States, which intensifies black propaganda against Turkey’s efforts to defend its rights,” the article read.

“The United States continues to be by Greece’s side,” TRT Haber reported, commenting on a new “crusader alliance” against Turkey.

NATO forces are taking part in the Castle Forge exercise, with the US Air Force Europe-Africa Command (USAFE-AFAFRICA) taking the lead.

According to reports, the exercise is designed to provide a dynamic partnership-focused environment that increases US commitment to collective defense in the Black Sea region, while enhancing interoperability with the NATO members (USA, Greece, Bulgaria, Romania and Canada) involved.

READ MORE: Provocative Turkish analysts: “We will enter Greece via Alexandroupolis or Bulgaria!”

Unemployment in Greece fell to 13.9% in August

Turkey: “Mitsotakis goes to the US to exclude us from the F-16”, says analyst

Turkish analyst: “Greece is the number one threat to Turkey”

Turkey: “Greeks together with Zelensky applauded the genocide of 52,000 Turks”, says analyst