The recent celebration of the 450th anniversary of the Battle of Nafpaktos, considered one of the most important naval battles in world history, annoyed the Turks.

Today’s front page headline of the Hürriyet newspaper, “450 years later, the Greeks have the same mentality” is typical, commenting on the presence of President Sakellaropoulou and the statements of the Deputy Minister of Education Angelos Syrigos. 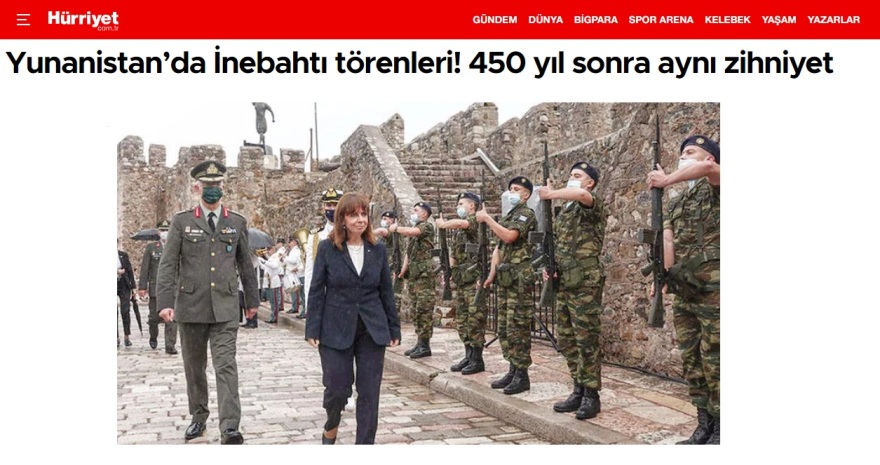 “Sakellaropoulou: The Battle of Nafpaktos saved Europe from the spread of Islam,” reads an AKIT TV report, commenting on the President’s statements, trying to give them an anti-Islamic character.

“The 450th anniversary of the Battle of Nafpaktos, in which the Ottomans were defeated by the Crusaders, was celebrated in Greece. A Greek official compared the alliances that had been formed against Turkey with the Crusaders of that time,” commented CNN Türk, strongly promoting the statements of the Deputy Minister of Education, Angelos Syrigos.

Many Turkish media also commented on the BBC report on the celebration of the 450th anniversary of the Battle of Nafpaktos, which took place last weekend, noting that “the victory of the Crusaders against the Ottoman Empire in Greece was celebrated.”

The Turks are trying to eradicate from the collective memory and the educational system this event, which is considered the first great naval defeat of the Ottomans.

Of course, those who were annoyed by the recent celebration in Nafpaktos, have not shown similar sensitivity to the neo-Ottoman celebrations of for the Fall of the Constantinople, the Battle of Manzikert, etc.

The Battle of Nafpaktos is considered one of the most important naval battles in world history. It is, even, a historical station in naval tactics, as well as in shipbuilding.

The destruction of the Turkish fleet by the combined British, French and Russian navies revived the morale of the enslaved peoples of the Balkans and was the starting point of a series of revolutionary and conspiratorial actions against the Turks.

These moves were made in the hope of the help promised by the European forces of the Holy Alliance (Sacra Liga).

These aids never really came or were meager and the revolutionary efforts were unsuccessful.

However, they testify to the vitality and the strong national consciousness of the peoples of the region and especially of the Greeks.

The European powers intervened in the Greek War of Independence after continually being shocked by horrific massacres, especially after the Ottomans brought the Egyptians into battle after being kicked out of the Peloponnese and Attica by Greek forces.

READ MORE: Çelik’s delusion: “We will do everything to protect our Blue Homeland interests.”

Turkish press: Turkey still has sovereignty over 9 Greek islands, such as Lesvos, Chios and Samos

Turkish media continue their provocations – “We can go swimming to Kastellorizo”