US bases in Aegean islands, in the context of the recently renewed Mutual Defense Cooperation Agreement between Greece and the USA, “sees” an article in the Turkish newspaper Sözcü.

Entitled: “The US will set up base in the island that is in front of the nose of Turkey,” the report says: “The new defense agreement signed by Greece and the US, five years is perceived American efforts to establish a military base in Aegean islands.”

“In fact, preparations have begun for the creation of a base on the island of Samothrace, which is only 7 miles from Imbros,” the report falsely claimed.

The article broadcasts analysis by Greek media, according to which the recent signing of the Defense Cooperation Agreement with Washington leaves an open window for an American presence in the future on other Greek islands besides Crete, as it includes an explicit provision for expansion to other facilities.

However, Sözcü indicate falsely that the US has already announced that Samothrace in the North Aegean will have a new American base “on the grounds that it is near Alexandroupolis and because of its geographical position, can monitor the movements of the Russian navy in Dardanelles.”

It even published a map of the island, in order to prove to its readers to how close the island is to the Turkish-controlled coast. 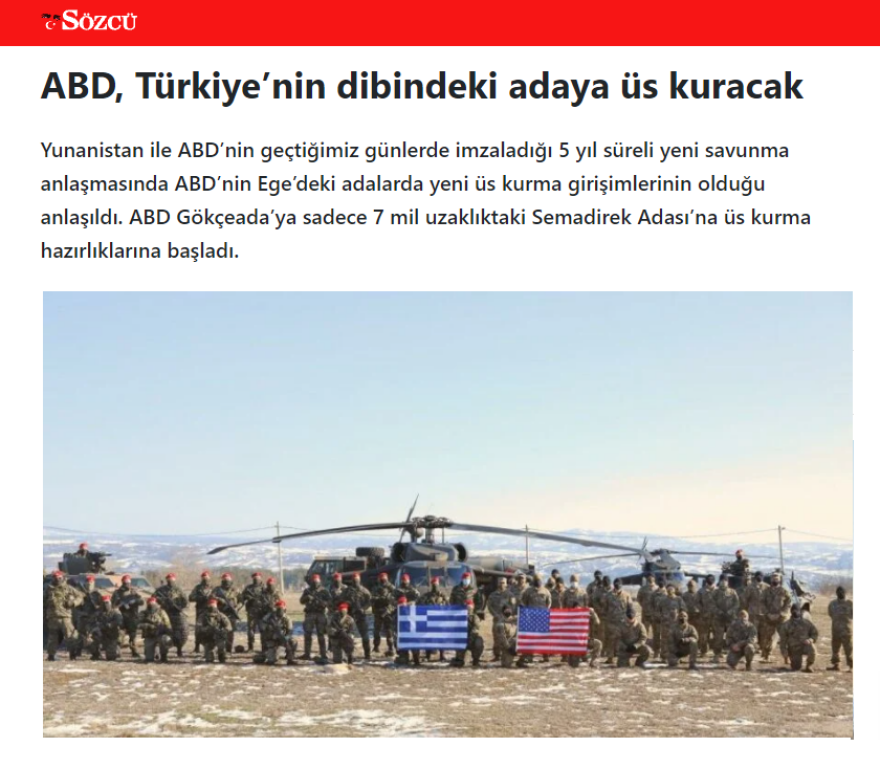 TRHaber is on the same wavelength, with the title: “The US plan in the Aegean Sea has been revealed! They will set up base in the Greek islands.”

READ MORE: Annoyance in Turkish media and threats against the Greek-American defence agreement.