Mitsotakis noted that Greece has accepted more than 50,000 asylum applications in the last three years and that no one can accuse it of not respecting human rights.

At the same time, he added, "I have an obligation to protect our borders" and he called on Turkey to honour its own side the EU-Turkey Joint Statement of 2016.

Balls asked Mitsotakis: “Our Prime Minister likes his holidays, so I’m thinking a Greek trip next year when you meet him.

“He also likes Greek history, I’m sure you’ll be discussing the Elgin marbles is there a chance in persuaded this classicist Prime Minister here in Britain to start thinking in a different way about the Elgin Marbles?”

Mitsotakis explained: “Well, he should, he’s a lover of classical sculptures,” however, Balls interrupted and asked him why they were here.

“They’re here because they were stolen by Lord Elgin!” Mitsotakis exclaimed, to which Balls retaliated: “That’s debated, stolen or legal?”

“But at the end of the day, this is not a legal argument, and I don’t like to talk about the return of the marbles.

“I like to talk about the reunification of the marbles; I would encourage you to have one of your shows in that part of the museum.

“You will see half of them, which is what you show in a lovely modern museum right under the acropolis.

“We are advocating for the reunification of the marbles, I will be making my case to the British Prime Minister."

“I think the general approach that these marbles belong to the British Museum, they’ve always been there, is slightly anachronistic,” he exclaimed.

Balls continued: “Are there things that you could kind of loan back or give back to the UK or even a trade?” 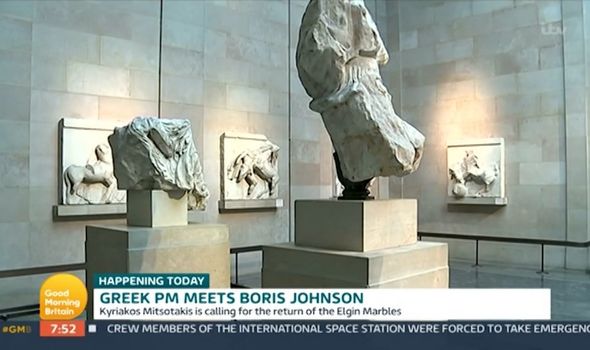 “We can certainly, first of all, want the sculptures back for good, so we will not settle for a loan, but what we can offer is certainly an arrangement," Mitsotakis replied.

“We can offer to the British Museum artefacts and treasures that have never left the country as part of a rotating collection.

“If there is a will, I am sure we can find a solution and what better demonstration of global Britain but on the 200th anniversary of the beginning of the war of independence.

“The Great Britain to make such a generous gesture towards the Greek people,” he told Balls and Reid.

Concluding the interview, Balls said: “I reckon this Prime Minister Boris Johnson is your best chance, so good luck, if you can’t persuade him, I don’t think you can persuade anybody.”

READ MORE: Europe agrees to proposal submission by Greece and Cyprus for measures against Turkey.

Lambros Koromilas: Hero of the Macedonian Struggle against the Turks and Bulgarians