Pope Francis was welcomed to the Presidential Mansion on Saturday noon by Greek President Katerina Sakellaropoulou, who spoke of his interest in the region of the Mediterranean at large and his continuous concern for interreligious dialogue and the ecumenical nature of Christianity.

The event included the prime minister, the president of Parliament, the main opposition leader, leaders of the armed forces, cabinet members, local government officials and members of academia, who welcomed the first extensive visit by the leader of the Catholic Church and Vatican state for a three-day visit.

President Sakellaropoulou spoke of “difficult times with great trials for humanity like the refugee and migration crisis, poverty, climate change and the pandemic,” and said that the contribution of religion and of the church “is directly related to the politics of welfare of others and of humanitarianism, and opens paths to the peaceful coexistence and prosperity of us all.”

Pope Francis, she said, worked tirelessly and selflessly for others and had an extensive social sensitivity towards those who had been unlucky and mistreated. She also noted that he had consistently supported international legality and the state of law, fundamental tenets of liberal democracy that Greece supports as well.

The pandemic, the president said, showed how vulnerable people are, and how necessary that states help each other. “At the same time, the health crisis is an exercise of responsibility for all of us, especially through daily behaviors to support our fellow human beings. In the endless energy and inspiration of scientists, the self-sacrifice of doctors and nurses, the patience and adaptability of many, we recognize the uniqueness and richness of human nature against an unprecedented and long-term difficulty,” Sakellaropoulou noted, calling for the vaccination of the entire planet and the non-privileged populations in particular, to prevent inequalities.

Climate change and the environment, of special interest to the prelate, was an issue with extensive ethical parameters, and something Greece experienced first hand with the destructive fires this past summer. The fight against the climate crisis should be Europe’s top priority, she said, especially for the next generations, and Greece takes part in international efforts in this direction.

Speaking of migration and the refugee crisis, another issue the pope has worked on, President Sakellaropoulou said that his first visit to Lesvos in 2016 helped highlight the urgency of the crisis globally. “You have consistently expressed your sensitivity to migrants and those requesting asylum and called on the international community to start dialogue and a coordinated reaction against their use as political tools. You have systematically recognized the humanitarianism of Greece, as well as the disproportionate burden they have shouldered.”

Finally, the Greek president said Greece looks forward to working with the Holy See to protect the Christian communities in threatening areas, and thanked Pope Francis for his public support of keeping the UNESCO-listed Hagia Sophia an ecumenical symbol of world heritage open to all.

Pope Francis expressed his pleasure at being in Athens and Greece, through which the paths of the Gospels united East and West, the Holy Land and Europe, Jerusalem and Rome, and said “these Gospels, carried the good message of a merciful God in Greek, an immortal language that Logos used for expression, the language of human wisdom that became a language of divine Wisdom.”

“Without Athens and without Greece, Europe and the world would not be what they are today – they would be less wise and less happy,” he added. Describing how one looks up and sees the Acropolis while approaching Athens, he likened it to the extension of humanity toward the divine. “It is the calling to expand our horizons up: from Mt. Olympus to the Acropolis and to Mt. Athos, Greece calls on human beings of any era to align the journey of a lifetime above, toward God, because we need transcendence to become truly human.” Instead, he said, the West is trapped by “the frenetic choice of thousands of earth paths and an insatiable gluttony of a consumerism that strips us of identity.”

Pope Francis drew from Greek culture to speak of the need to care for others and realize that humans are citizens of the world – citing Socrates’ saying “I am not an Athenian, but a citizen of the world” and Aristotle, who first said that a human being is “a political animal”, a member of a society. Instead, he said, he was concerned about the regression of democracy, both in Europe and the world, which required participation and collaboration, effort and patient.

“In order to have true participation in the common good, special attention – if not by priority – should be paid to weaker sectors,” especially in the challenges that humanity faces today, he said, like climate change, the pandemic, the shared market and scattered pockets of poverty.

The pope also praised the Prespes Agreement, noting that he wanted to “renew my appreciation for not-so-easy path that led to the Prespes Agrement, signed by this democracy and that of North Macedonia.”

Referring to the symbol of the olive tree, he noted that this today could serve to stand as a symbol of resilience against the climate crisis and its destruction. It is a tree that features in the story of Noah and the Ark and in the Bible, inviting others to stand by others, especially strangers to our country. In the refugee crisis, the European Community, he noted, was rocked by nationalistic selfishness, and instead of being an agency of solidarity, it sometimes appears to be immovable and disorganized.

“If at one time ideological clashes obstructed the building of bridges between East and West on the continent, today the migration issue has opened cracks between North and South,” Pope Francis pointed out. When Odysseus returned home to Ithaca, “he was not recognized by the leaders of the land who had taken over his house and goods, but by those who had taken care of him.” In the same way, he said, trials like those of migration bring us closer together during difficult times.

Speaking of the coronavirus pandemic, Pope Francis said that it helped humanity discover how fragile it was and how people needed one another. Through this difficulty, a path opened for solidarity, which the Catholic Church in Greece is happy to continue to contribute to.

The Pope thanked Greece again for legally recognizing the Catholic community and asserted that the community was committed to promoting the common good of Greek society. Two hundred years ago, he said, the temporary Greek government addressed itself to Catholics, telling them, “Who of us is closer to you, our fellow citizens, than us, even if we have some worshipping differences? We have a single country, we belong to a single people, We Christians are brothers through the Holy Cross.”
Closing his speech, Pope Francis expressed the hope that Athens would continue its message of democracy:

“From this city, this cradle of democracy, there once rose – and may it continue to rise – a message that focuses above and on the other person. To autocracy’s alluring invitation let it respond with democracy, to selfish indifference may it present care for the other, for the poor and for creation – all fundamental bases for a renewed humanitarianism, which our times and Europe needs. God bless Greece!” 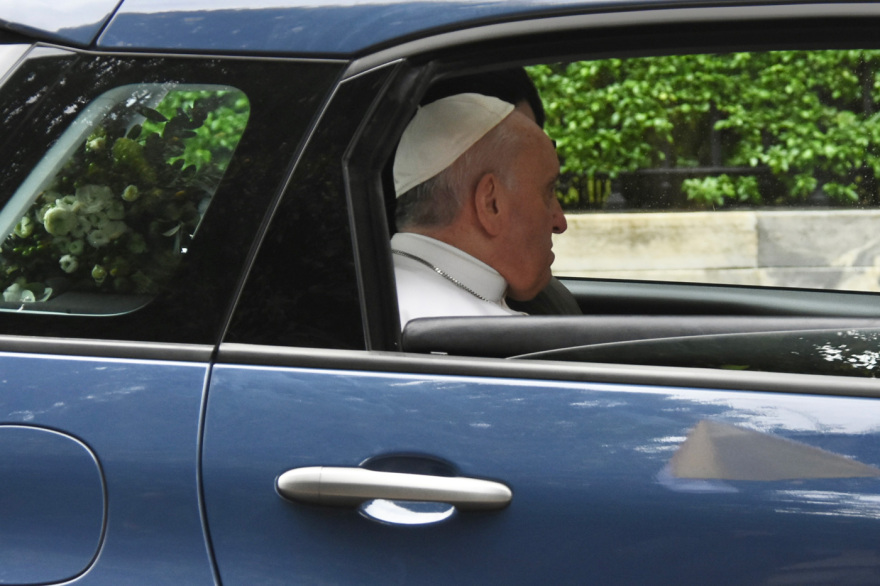 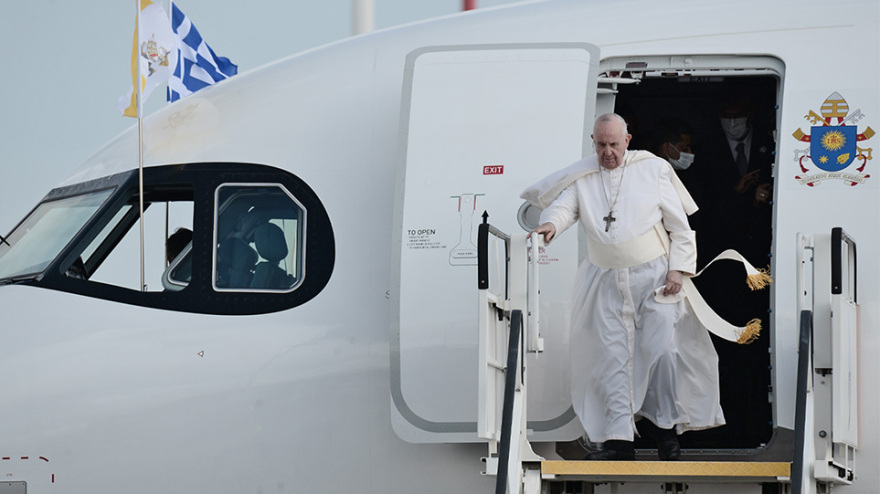 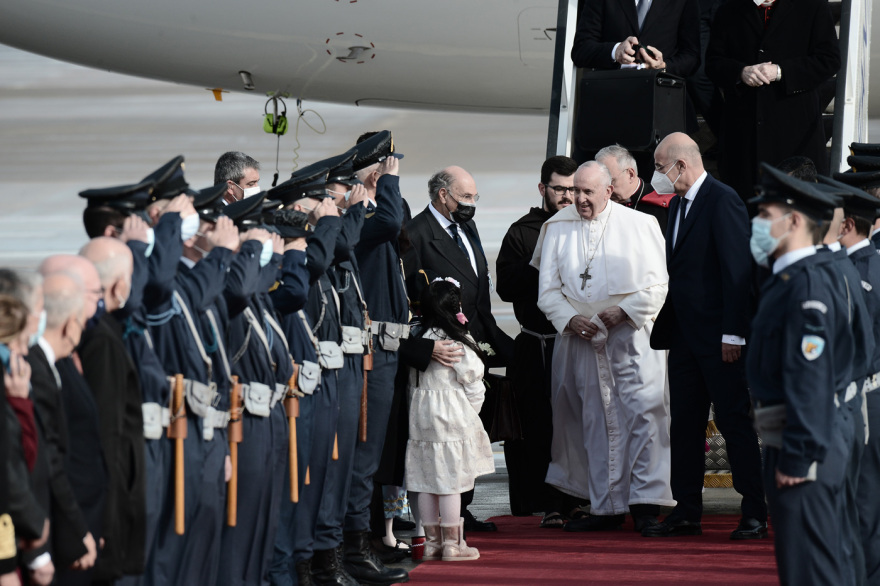 Pope Francis sends letter of thanks to Athens Mayor Bakoyannis

Pope Francis: The Greek saying he posted on Twitter before leaving the country