In the midst of the energy crisis and the continuing slump in the Turkish lira, Ankara’s targets the oil around the Greek island of Thasos.

An article in the pro-government newspaper Sözcü provocatively stated that at a time when the price of oil is soaring, Greece produces 4,000 barrels of oil per day from the island of Thasos, whose territorial waters apparently belongs to Turkey.

“Greece produces 4,000 barrels of oil per day from Thasos , although Turkey has the right to use the territorial waters,” the newspaper wrote, adding: “Greece exports and uses this oil, without any obstacles.” 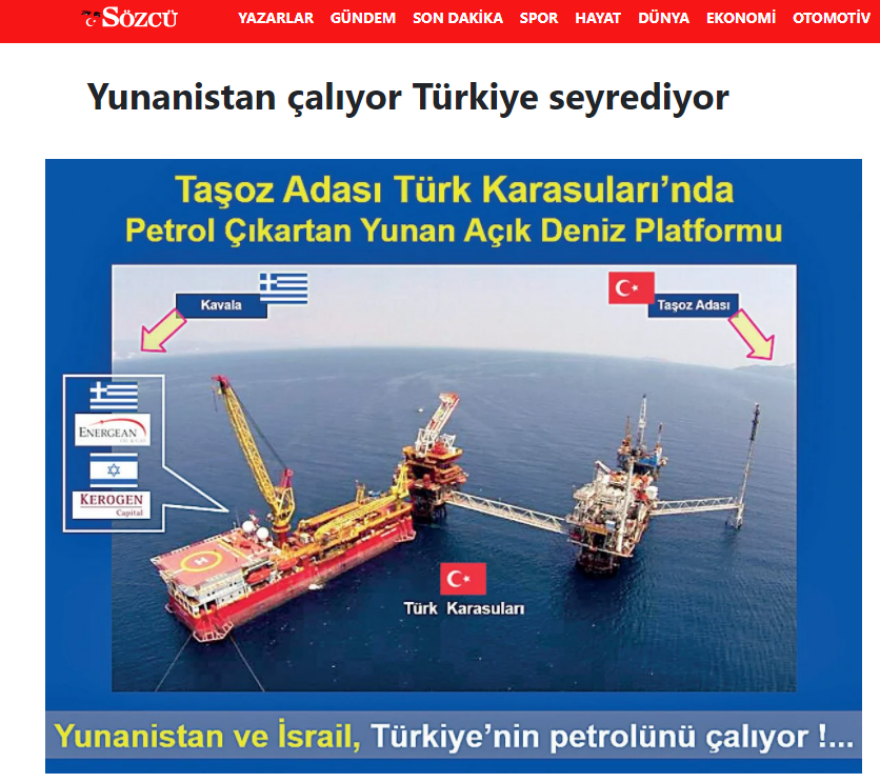 However, in the past, “the National Security Council of Turkey has issued warnings with the result that Greece has stopped oil drilling,” the report said.

The author claims that there are 111 million barrels of oil in the Eastern Mediterranean, which belong to Turkey, and that Greece and Israel in recent years are exploiting by “stealing” 10 million barrels from Turkish territorial waters.

“According to the Berne Agreement signed between Turkey and Greece on November 11, 1976, Greece cannot seek or export oil and gas beyond its territory,” the article stated.

The article also called on the Turkish government to intervene in order for Greece to stop “stealing” 4,000 barrels of oil per day from the waters of Thasos, which – as it claims – belong to Turkey.

“If we continue to remain silent in addition to the militarisation of the islands, the loss of our 19 islands, we will also lose our oil,” the author said in a delusional manner.

Ümit Yalım, the author of the article, is one of the main exponents of Turkish revisionism against Greece, specifically through books, articles, lectures and media interviews.

Through these mediums, Yalım has managed to impose a number of extremist positions as an official dogma of Turkish foreign policy.

It is no coincidence that he regularly writes articles on the website of the 21st Century Turkey Institute, which is considered the official think tank of the Turkish government as it is funded by the Ministry of Foreign Affairs.

Yalım was the first to raise publicly in Turkey the issue of Greece’s alleged illegal occupation of islands and islets in the Aegean Sea – a theory that was first adopted, for political reasons, by the opposition Kemalist Republican People’s Party (CHP).

Although considered a “Kemalist”, Yalım managed – by stroking the ears of the extreme nationalists – to impose some of his maximalist positions on the agenda of Turkey’s political life.

November 2021 arrivals to Greece increased by over 500% (!) compared to previous period