“Deeply saddened by the tragic loss of lives at a religious shrine in Jammu and Kashmir,” read the Twitter statement from the Greek Foreign Ministry regarding a stampede that killed at least a dozen.

“Our heartfelt condolences to the bereaved families & our deepest sympathies to the government & people of India,” it added.

Deeply saddened by the tragic loss of lives at a religious shrine in Jammu and Kashmir. Our heartfelt condolences to the bereaved families & our deepest sympathies to the government & people of #India pic.twitter.com/D6owBb09Kn

The disaster happened around 3am (21:30 GMT) while it was still dark on the route to the Vaishno Devi shrine, one of India’s most revered Hindu sites.

“At least 12 people lost their lives and 13 are injured,” one senior government official told AFP news agency on condition of anonymity.

“The toll could be higher as the route to the hilltop shrine was packed with devotees trying to do the customary new-year visit and prayers,” he said.

Other news reports said that as many 20 people have been injured.

Images aired by the television station also showed several ambulances rushing to the site of the incident in Jammu and Kashmir. 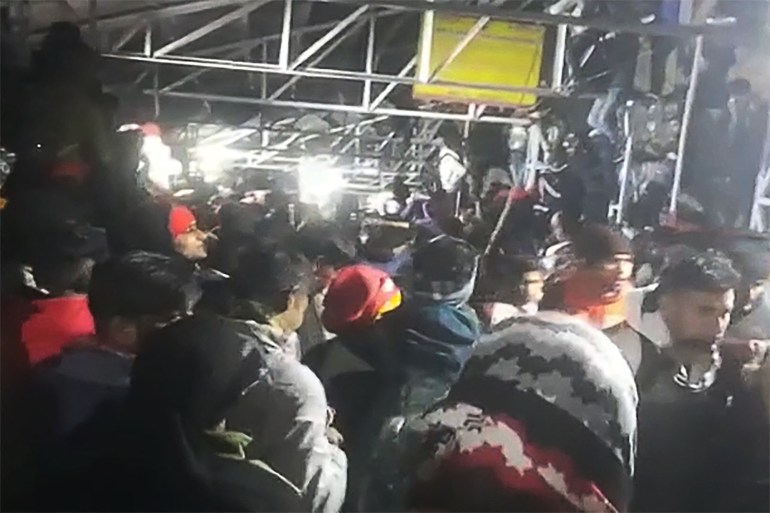 The Mata Vaishno Devi is one of the most revered Hindu shrines in northern India, with tens of thousands visiting to offer prayers every day.

According to reports, the stampede was triggered by a heavy rush of people coming to pay their respect at the shrine to mark the beginning of the New Year.

“People fell over each other… It was difficult to figure out whose leg or arms were tangled with whose,” witness Ravinder told AFP by phone from the scene in Jammu and Kashmir.

“I helped pick up eight bodies by the time ambulances arrived after about half an hour. I feel lucky to be alive but am still shaking with memory of what I saw.”

In a statement posted on social media, Indian President Rashtrapati Bhavan said he was “very distressed to know that an unfortunate stampede claimed lives of devotees at Mata Vaishno Devi Bhavan”.

“My heartfelt condolences to the bereaved families. I wish speedy recovery to those injured,” he added.

The office of the Lt Governor of Jammu and Kashmir said that a “high level inquiry” has been ordered” to look into the incident.

India: A goat was born with… “a human face” – See the photos