The Turkish Coast Guard categorically denies the recent reports by the Sözcü newspaper, which "saw" tension between Turkey and Greece in the area of ​​the Imia islets.

In a statement, the Turkish Coast Guard administration directly accused the newspaper and its journalist Yaşar Anter of "fabricated reports" that are "far from the truth".

In the last days of 2021, the online edition of the Sözcü newspaper published two "exclusive" reports by Anter, entitled:

"The specific publications try to create the feeling in the public opinion of Greece and Turkey, that there is tension between the vessels of the Coast Guard of the two countries", the announcement emphasised.

The announcement stressed that articles with this content exist every year at such a time, meaning the previous of last February, when again Anter and Sözcü "saw" tensions in Imia. 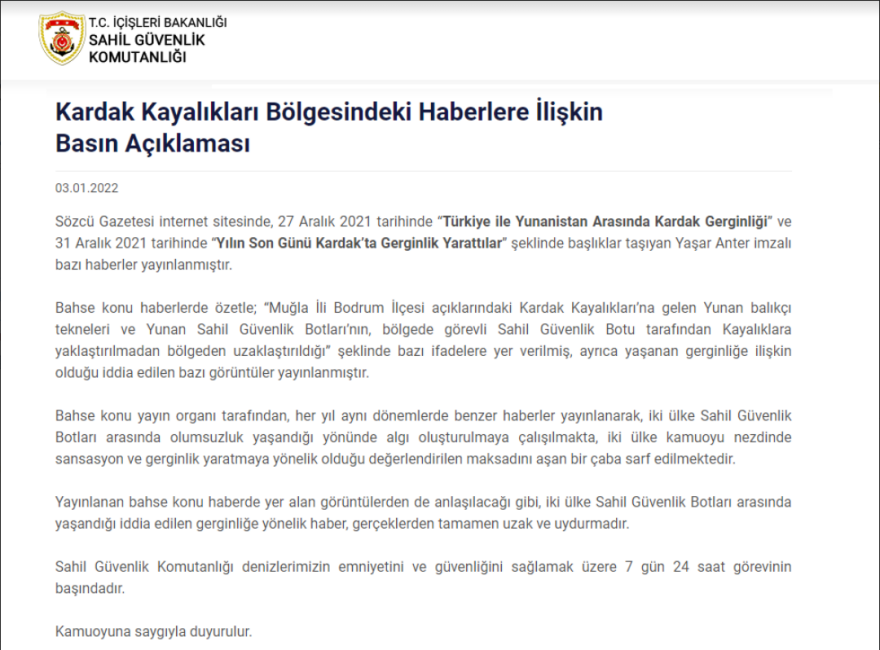 "As can be seen from the images in the video in question, the news about the alleged tension between the vessels of the Coast Guard of the two countries is completely far from the truth and is fabricated", the announcement continued.

"The Administration of the Coast Guard is in service 24 hours a day, 7 days a week to ensure the safety of our seas," the announcement concluded.

Last Saturday, Sözcü claimed in a video that: "The Turkish Coast Guard, which was patrolling the area, removed six Greek fishing boats and a Greek Coast Guard boat that wanted to come to Imia, off the coast of Alikarnassos in Muğla."

A week ago, Anter wrote again: "The Greek Coast Guard and the Greek fishermen wanted to approach Imia. The Greeks prevented a Turkish coast guard boat from approaching the area."

"Turkish and Greek boats approached each other," the report added, noting that the incident occurred between 15.00 and 16.00 in the afternoon when Greek fishing boats approached the Turkish Coast Guard boats at a distance of 20 metres.

It is not the first time that Anter and Sözcü "see" tension between boats of the Greek and the Turkish Coast Guards.

A similar report was published last February. At that time, the newspaper had claimed that two boats of the Greek Coast Guard from Kalymnos, tried to approach the rocky islets of Imia, with the result that the Turkish Coast Guard intervened and there was tension.

The article even wrote that the Greeks wanted to hold a ceremony for the three officers who went missing on the night of the Imia crisis.

However, even then, both the Turkish Coast Guard and the Turkish Interior Ministry categorically denied Anter and Sözcü again.

From the denial and the heavy peaks of the Turkish Coast Guard, it appears that either Sözcü and Anter every year at such a time, and because of the "war" of sea bream, remember Imia and see "tensions" between the two countries to gain impressions.

There was indeed an incident due to the attempt of a Turkish Coast Guard to harass Greek fishing vessels, off Imia, finally leaving the spot with the appearance of the Greek Ciast Guard.

In the past few days, information broadcast by Greek media converges on the second version. So far, however, there is no official reaction - position of the Greek Coast Guard.

Political, celebrity and social media reactions to the Pakistani "occupation" of Syntagma Square