The Hellenic Navy, led by the Georgios Averof battleship, defeated the second and last attempt by the Ottoman Empire to break the Greek naval blockade against the Dardanelles to reclaim supremacy over the Aegean Sea.

At 08:20 on January 5, 1913 Greek patrols spotted the Ottoman fleet and the signal was received by the Greek Fleet of Moudros.

The already prepared Kountouriotis sailed at 09:45 from Moudros Bay and the two fleets met off Moudros about 12 miles southeast of Lemnos island.

The Turks had the advantage in firepower and protection. 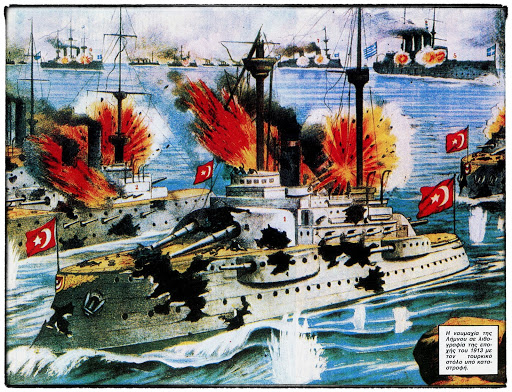 Gunnery exchange started at 11:34 and the Greek column turned left and further closed the distance to allow its older ironclads to open a broadside fire.

The Mecidiye and Turkish destroyers turned northeast, heading back towards the Dardanelles

They were followed by the Mesûdiye which also turned at 11:50, having been badly hit by both by the Hydra and Psara. 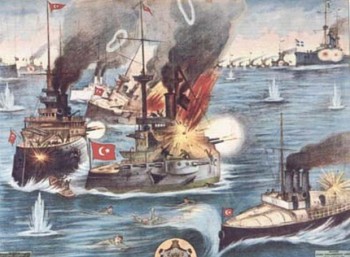 The central axial turret was blown off.

Georgios Averof broke off the formation and signalled “independent action”.

It sped up while maneuvering to engage the Turks with artillery on both sides.

Later, the Greek ship chased the retreating Ottoman ships, followed by the rest of the fleet towards the Dardanelles.

The Ottoman Navy retreated beyond the Dardanelles for good, They never attempted another attack, leaving the Greek Navy the dominant power in the Aegean Sea.

Thanks to this victory, the Turks could not move more troops from Asia Minor to aid its army in the Balkans, allowing the allies to liberate the Balkans.

Archaeological find in Tyrnavos: A stone carved with Ottoman Scripture was found