60.9% of the participants in an Alpha Research poll believe that the Republic of Northern Macedonia should become a member of the European Union.

According to 32.2%, it should not be connected and 6.9% of respondents have no opinion.

In answering whether: ” Should Bulgaria support Northern Macedonia’s negotiations with the EU before an agreement on the disputed issues?”, 69% of respondents said “no” and 29.6% said “yes.” 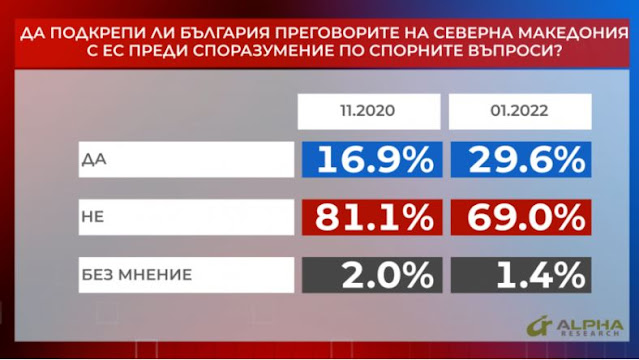 This survey will put even more pressure on the Bulgarian authorities when they decide to lift the veto in Skopje. 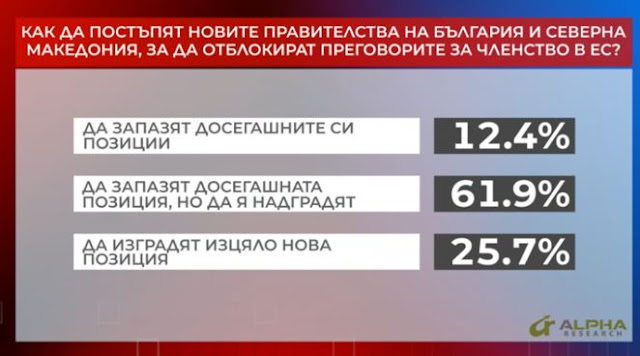 Almost 62% of those polled by Alpha Research believe that the new governments of Bulgaria and the Republic of Northern Macedonia should maintain their current position, but upgrade it to unblock EU accession talks.

12% of respondents believe that current positions should be maintained and according to almost 26%, a completely new position should be built.

READ MORE: Skopje continues its provocative campaign in violation of the Prespa Agreement.

An interesting point from Alpha Research is that every sixth Bulgarian has family ties with Skopje. 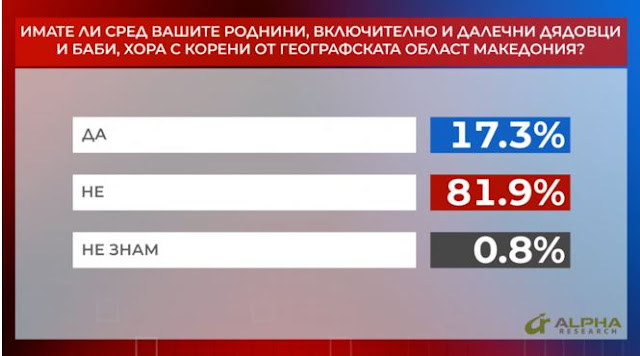 The Prespa Agreement between Skopje and Athens outlined that the country’s name is North Macedonia, thus ending the name dispute between the two countries.

It also confirmed that the people of North Macedonia have no connection to the Ancient Macedonians or Alexander the Great, as they were Greek.

However, the Greek government has often complained about North Macedonia’s continued violations of the 2018 Prespa Agreement.

Greece for example was angered last year when the national football team of North Macedonia at EURO 2020 sported a jersey bearing the abbreviations of “Football Federation of Macedonia”, omitting “North” from the name.

READ MORE: Bartholomew meets with Bishop of Skopje to normalise relations with Fanari.

July 22, 1943: Greeks fight back against Nazi intentions for Greater Bulgaria on Macedonia

Mitsotakis: IGB gas project is a “pipeline of values”