Without hiding its frustration, the pro-government Turkish media mocks Greece for acquiring the first six Rafale fighter jets from France.

With ironic comments, a portion of the Turkish press is trying to discredit the acquisition of the six Rafale fighter jets from Greece, with their irritation as evidence in the relevant publications.

Pro-government newspaper Sabah, wrote an article entitled: “Joy in Greece for used aircraft: 6 of the Rafale planes purchased from France were delivered.” 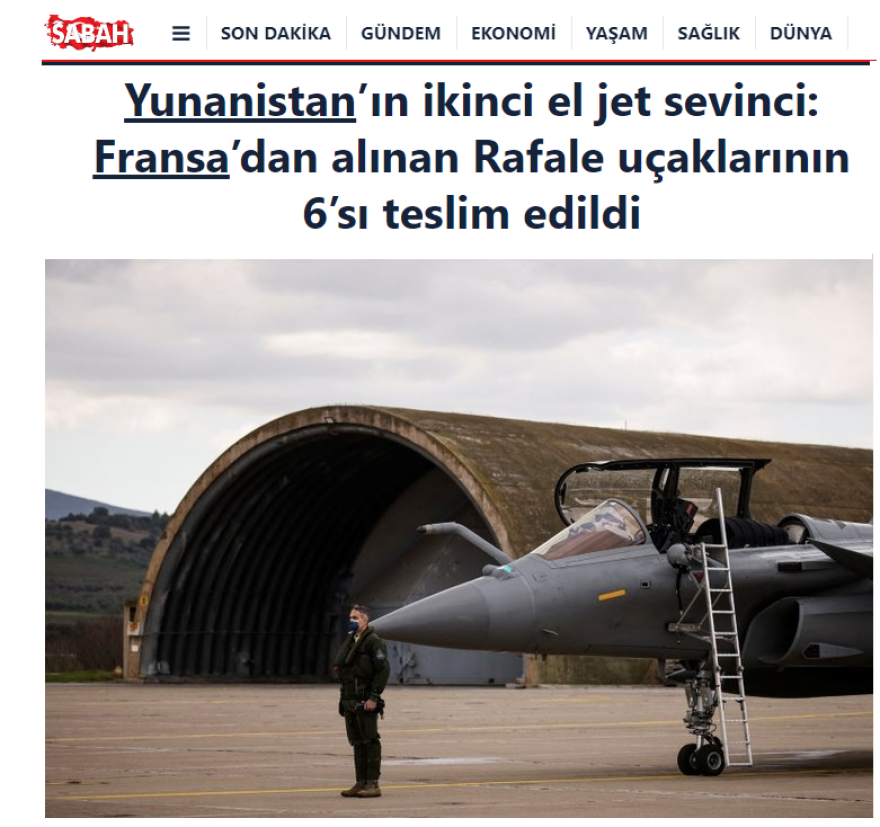 The newspaper presents the news of the arrival of state-of-the-art French aircraft in Athens, posting relevant photos and commenting that Greece is equipped with “used” Rafale’s due to the “regional superiority” of Turkey.

“Greece, which due to its annoyance from the regional superiority of Turkey, is making an effort to strengthen its army and fleet, bought used Rafale fighter jets from France last year,” the publication stated.

Elsewhere, the newspaper noted that Greece is moving to large military equipment, despite the financial problems the country has been facing in recent years.

“This purchase from Greece, which is known to be in a financial impasse, was made with pressure on the defence budget and was highly discussed,” Sabah wrote.

Special mention, with a caustic mood, is also made in Turkish media because of the consecration ceremony that took place yesterday at the 332nd Air Force Squadron in Tanagra for the arrival of the six Rafale fighter jets.

The first six Rafale fighter jets that Greece purchased landed at Tanagra Airbase on Wednesday after departing at 09:25 local time (Greek time 10:25) from Istria in France and made an impressive flight over the Acropolis less than two hours later.