The Turkish government is seeking the presence of delegations from Greece, Armenia, Egypt and Israel at the upcoming Antalya Diplomacy Forum, also known as “Turkish Davos”, as part of efforts to normalise their relations with neighbouring countries.

The Turkish press reports characterise the Antalya Diplomacy Forum, which will take place on March 11-13, as a “platform for solving regional problems.”

Turkish media noted that: “Greece, Armenia, Egypt and Israel, which are already undergoing normalisation negotiations, may be new participants” to the event. 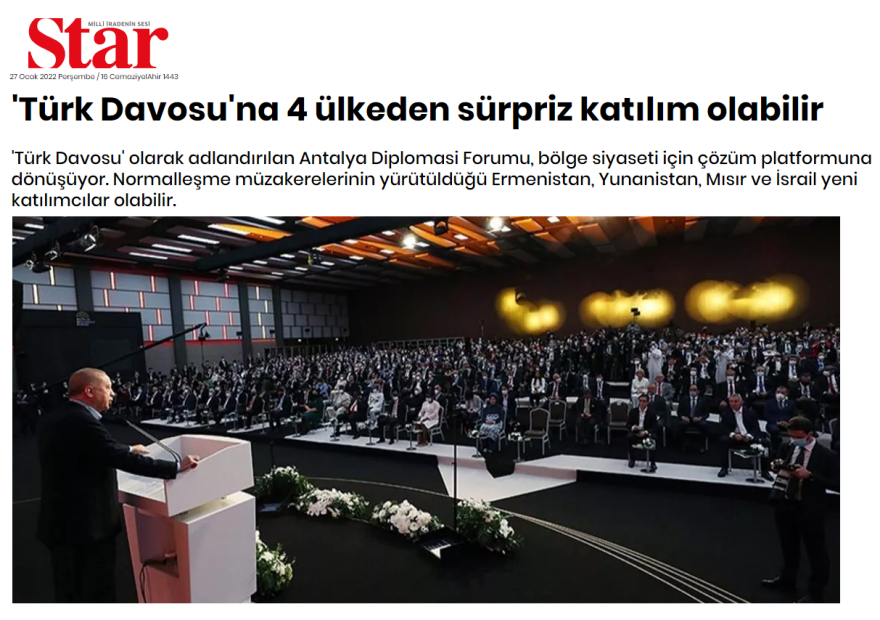 Recently, Turkish Foreign Minister Mevlüt Çavuşoğlu revealed that in addition to Greece, Armenia, Israel and Egypt, Cyprus – or the “Administration of Southern Cyprus” as Turkey calls it – were invited to Antalya to participate in the forum.

Ironically, Ankara does not recognise the Republic of Cyprus.

According to the Sabah newspaper, Armenia has announced that it will most likely participate in the Antalya Diplomacy Forum.

Turkish media cite the example of the Athens-Ankara talks in 1988 in Davos between then-Prime Ministers Andreas Papandreou and Turgut Özal.

They noted that “the Antalya Diplomacy Forum plays an important role in negotiations between Turkey and neighbouring countries, which are not at their best levels.”

A total of 11 heads of state and government, 45 foreign ministers, and attendance at ministerial level were part of the forum.

Additionally, the event was attended by about 60 representatives of international organisations and high-level personalities, many Turkish and foreign guests from the business and academic world.

256 young people in total, including undergraduate, graduate, and doctoral students from more than 50 universities were in participation.