About 1,360 aspiring space travelers, out of the more than 22,500 nominees received, have entered the second phase of the European Space Agency (ESA) future astronaut selection process – 24 of them being Greek.

Four to six candidates will cross the finish line in late 2022 after a lengthy selection process.

The newest recruits will comprise of a new generation of ESA astronauts.

After a first selection, 1,361 candidates (831 men and 530 women) are continuing to the next phase of interviews: “a full day of psychological performance testing at a facility in Europe,” the ESA said in a press release.

“This reflects the high caliber of applications received across the board,” the statement added.

France, the country that had submitted the most applications at the beginning of the process, leads by a large margin, with 404 candidates (250 men and 154 women).

In all, a record number of 22,523 applicants had applied by the end of the recruitment campaign in June 2021. That is three times as many as 11 years ago.

A plan for a future mission with a physically disabled astronaut has also been launched: 27 candidates for this position have been invited to the second phase.

See the results announced by ESA for each Member State: 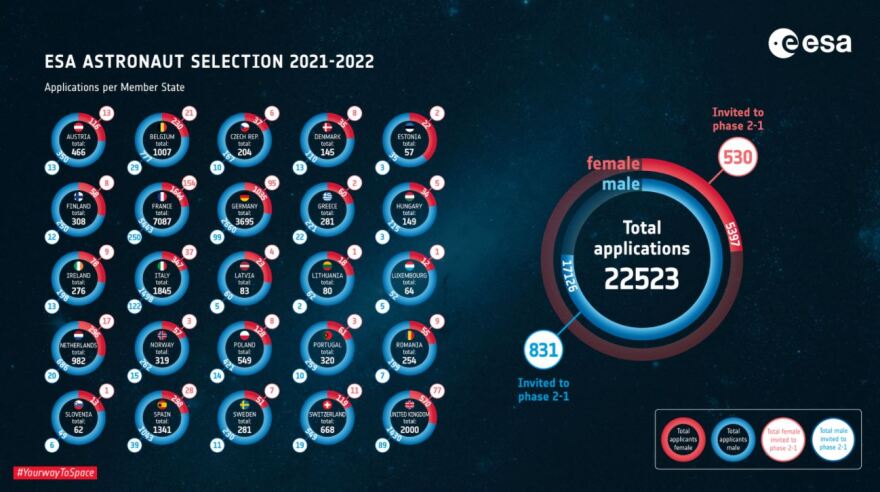 “Candidates who are successful at phase two will go on to participate in a set of psychological interviews and group tests ahead of medical testing,” the statement continued.

“Those who successfully pass each of these selection stages will be invited to recruitment interviews,” it said, adding: “ESA’s new class of astronauts and reserve astronauts is expected to be announced in autumn 2022.”

READ MORE: For the first time a female astronaut will step on the moon: New mission given the Greek name “Artemis.”

For the first time a female astronaut will step on the moon: New mission given the Greek name “Artemis”