Ties between Greece and Sicily are to boost following the meeting between Greek Culture and Sports Μinister Lina Mendoni and the president of the Sicilian Parliament (ARS), Gianfranco Miccichè, during her visit to Italy.

According to a ministry statement on Friday, Miccichè gave a very warm welcome to the Greek minister at the Palazzo Reale, the seat of the Sicilian Parliament.

The subject of their discussion was the strengthening of bilateral contacts and cooperation between Greece and Sicily, especially in the field of culture. 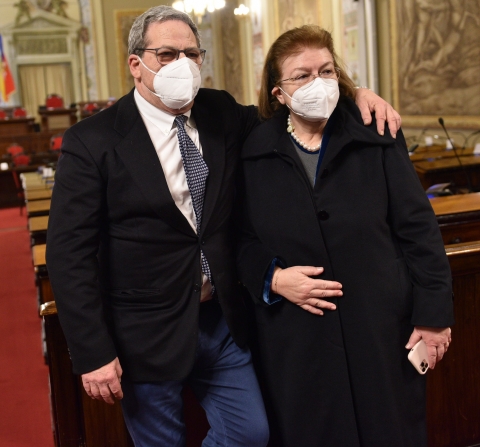 The meeting was attended by the Regional Councillor for Cultural Heritage, Alberto Samonà and the Director of the Salinas Archaeological Museum, Caterina Greco.

In the tour that followed at the Palazzo Reale, one of the most important museums and exhibition spaces in Sicily, the Greek minister was accompanied by the Secretary General of the ARS, Fabrizio Scimè.

She was also accompanited by the Director of the Federico II Foundation, Patrizia Monterosso, the General Director Nikos Stampolidis, and the professor of the National and Kapodistrian University of Athens (EKPA), Mariangela Ielo.

Among the most interesting parts of the Palazzo Reale are the basement spaces, where the underlying older structures have been revealed in places, as well as the exhibition “Purification” on concepts such as spirituality, existence, salvation, life, death.

The exhibition discusses works of art ranging from the 6th century BC to the 18th century, from museums and churches in Sicily, with creations by American video artist Bill Viola.

The Greek culture minister also had a meeting with the Rector of the University of Palermo, Prof. Massimo Midiri, with whom she discussed issues related to the teaching of the Greek language, and was given a tour of the Steri monument complex.

Eleni Foureira shows us her face without makeup

Jennifer Aniston: Her new movie with Adam Sandler and her new hair