The vest of Eleni Staikou, who has a most fascinating story, dominates a prominent position in Exodus Museum of Missolonghi.

This elaborate men’s gold embroidered vest from the early 19th century was worn by the young Eleni Staikou at the time of the Exodus of Missolonghi.

It is one of the most important exhibits of the Exodus Museum.

Eleni was the daughter of chief Zacharakis Staikos.

As a young girl, she was petite with a beautiful face, dark eyes and blonde hair.

Eleni was taken prisoner after failing to escape from Missolonghi, however, in order to avoid being sold as a sex slave or being raped by the Ottoman Turks, she removed her eye with a fork to make herself less desirable.

In 1829, when the city was finally liberated again from Turkish occupation, she returned and lived in there, blind in one eye (as shown in her shocking photo).

After Greek independence was secured, she settled in Vrachori (Agrinio) in 1832.

She passed away the day after the death of her brother Sotirios Staikos on July 18, 1887.

Eleni left as a condition to her family that any girl born would take her name and her vest. 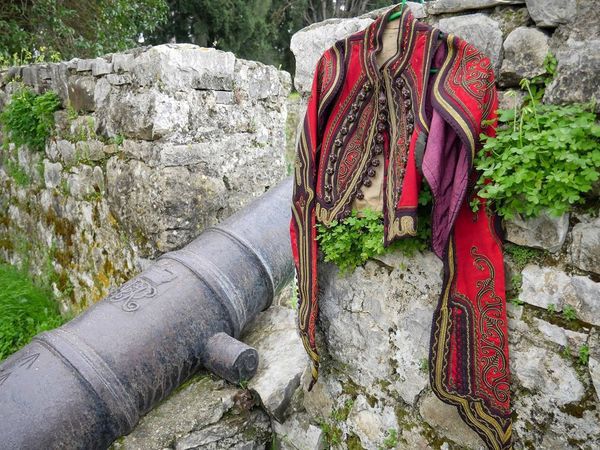 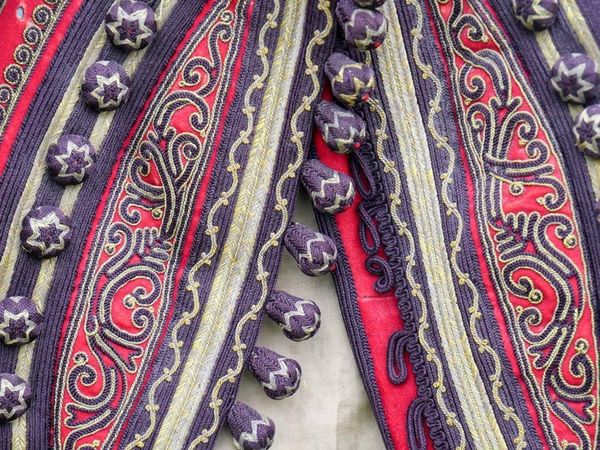 In 2018, her son Konstantinos Zarokostas entrusted this great heirloom to to the museum.

The Third Siege of Missolonghi was fought in the Greek War of Independence, between the Ottoman Empire and the Greek rebels, from 15 April 1825 to 10 April 1826.

The Ottomans had already tried and failed to capture the city in 1822 and 1823, but returned in 1825 with a stronger force of infantry and a stronger navy supporting the infantry.

The Greeks held out for almost a year before they ran out of food and attempted a mass breakout, which however resulted in a disaster, with the larger part of the Greeks slain.

This defeat was a key factor leading to intervention by the Great Powers who, hearing about the atrocities, felt sympathetic to the Greek cause.

Though a military disaster, the siege and its aftermath proved a victory for the Greek cause, and the Ottomans paid dearly for their harsh treatment of Missolonghi.

After this incident, many people from Western Europe felt increased sympathy for the Greek cause, as manifested for example in the famous Delacroix painting Greece on the Ruins of Missolonghi (1827).

This public sympathy for the Greeks had a significant influence on the eventual decision of Britain, France and Russia to intervene militarily in the Battle of Navarino and secure Greece’s independence.

The result of this, among other things, saw Missolonghi liberated again within four years.

Missolonghi is considered a ‘sacred city’ (ἱερὰ πόλις) in modern Greece for its role and sacrifice in the Greek War of Independence.

READ MORE: The Greek Revolution showed the people of Europe that political change was possible.

Angelos Charisteas: I have been a victim of fan violence many times, I was chased with stones