Greek Defence Minister Nikos Panagiotopoulos had four meetings with his Turkish counterpart Hulusi Akar in Brussels amid tensions between Athens and Ankara with Erdoğan and Çavuşoğlu calling for the demilitarisation of Greece's Aegean islands.

According to the Ministry of Foreign Affairs, Akar presented to the Minister of Defense of Greece a commemorative photo from their previous meeting. 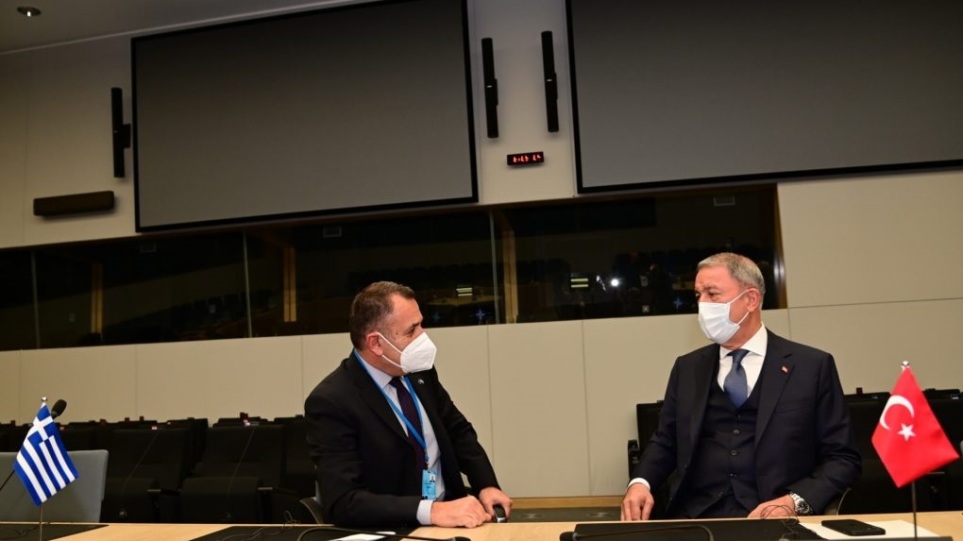 In their brief communication, as SKAI broadcasted, the need to keep communication channels between the two countries open was stressed.

At the same time, the climate of tension that is triggered at regular intervals in Greek-Turkish relations is due to the manipulations of the Turkish media.

Finally, both expressed their satisfaction for the upcoming round of exploratory contacts on February 22 in Athens.

Watch the video of Panagiotopoulos' meetings with NATO chief Jens Stoltenberg and Hulusi Akar for the 70th Anniversary of the Greece-Turkey accession to NATO:

NATO has added new members eight times since its founding in 1949 to include thirty members.

The early years of the Cold War saw a stark divide between Capitalist states of Europe, backed by United States, and the Communist states, backed by the Soviet Union.

This divide eased inclusion of Portugal under Antonio Salazar in NATO and encouraged the anti-Communist governments of Greece and Turkey to join NATO in 1952.

Greece would suspend its membership in 1974, over the Turkish invasion of Cyprus, but rejoined in 1980 with Turkey's cooperation.

NATO today currently has only one candidate country that is in the process of joining the alliance: Bosnia and Herzegovina.

North Macedonia signed an accession protocol to become a NATO member state in February 2019, and became a member state on 27 March 2020.

Its accession had been blocked by Greece for many years due to the Macedonia naming dispute, which was resolved in 2018 by the Prespa agreement.

Direct Canada to Athens flights to resume in April

When the Tinder Swindler arrived in Cyprus