What was the reminder of the Russian Foreign Minister Sergey Lavrov to the head of the Greek diplomacy Nikos Dendias, who seems to forget about one community of Greeks in Eastern Europe?

"It is not only the Greeks in Ukraine, but also the Greeks in Russia's Crimea that we invite you to meet," Lavrov told Dendias in front of television cameras.

And it was natural - according to experts in the background - to say such a thing since Dendias himself asked for the protection of the Greek community in Ukraine during his recent visit to the Sartana region.

In Sartana, he heard only half the truth about the situation, "forgetting" the other half of the ethnic Greek population that lives on the other side of the border, in the Crimea.

The Greek side forgets that as long as there are EU sanctions on Russia, the Crimean Greeks who want to come to Greece do not have the opportunity to visit and continue to suffer.

In fact, the issue had been raised in Parliament since last spring by MERA25 and its parliamentary representative, Maria Apatzidi.

"The problem is that Greek authorities are virtually unaware of the existence of the Greek diaspora in Crimea, denying them visas and therefore the opportunity to visit Greece," said Sergey Galanis, an ethnic Greek historian from Crimea.

"I know examples of people who could not attend the funeral of their loved ones in Thessaloniki, as well as Greek students who were not allowed to learn their language in Greece," he said, adding: "All these examples destroy the unity of global Hellenism."

In the view of the historian, who has been honoured by Russian President Putin, neither sanctions nor political reasons should be an obstacle to hinder contacts between the historical homeland and the diaspora.

"This is against the spirit of the UN regulatory documents.

"For this reason, in a press conference after talks with his Greek counterpart Nikos Dendias, Russian Foreign Minister Sergey Lavrov made the relevant reference to the Greeks of Crimea."

Who are the unknown Greeks of Crimea?

With the help of Galanis, we recall some key points in the history of the unknown Greeks of Crimea.

"In the disputes that arise over the ownership of Crimea, there are often reports that the peninsula is entirely Russian or Tatar or Ukrainian, even Greek," said the historian.

"It is clear that in this case we are talking more about the roots of human civilization in Crimea and not about the political regime of the peninsula in recent centuries.

"He was here before you and me," Russian President Vladimir Putin reportedly replied to Crimean Tatar activists who had asked him to legally recognise the peninsula's Tatars as indigenous to the region.

Putin's phrase seems to refer to another people.

"And indeed, the Greeks , like probably no other nation, contributed to the creation of Crimea as we know it.

"They were the ones who started to cultivate grapes and make wine in the region, constructed the first buildings and cities here, cultivated the first gardens and became the first fishermen of its coastal areas.

"Of course, the footprint of the Greeks could have been overshadowed by other nomadic tribes, such as the Cimmerians and the Scythians, but unlike the Greeks, they disappeared without leaving a trace in world history." 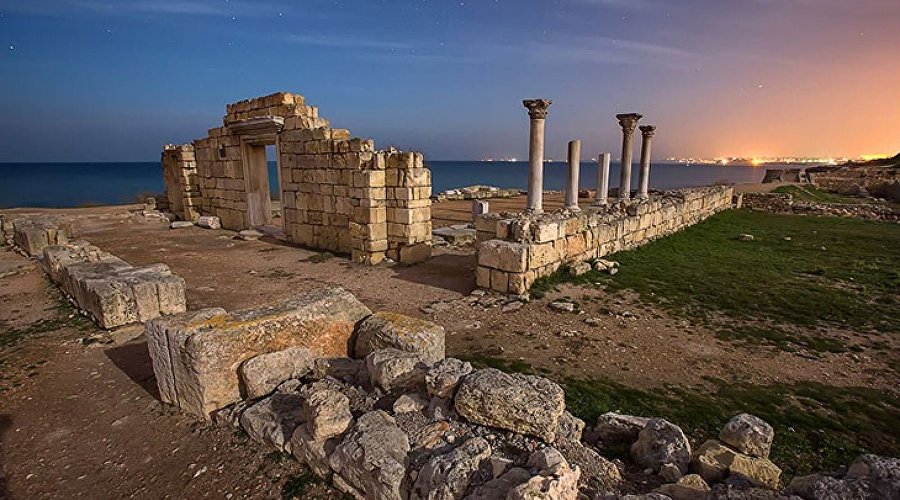 However, according to the historian, Greeks still live in Crimea, while the Greek community on the peninsula today numbers about 10,000 people.

"It was formed by three main groups. First by Greeks whose ancestors came from the islands of the Greek archipelago and settled in the Crimea during the reign of Catherine II.

"Secondly from descendants of Greek Thracians and populations from the Balkans, and thirdly Greeks from Pontos and the Caucasus," explained Galanis.

The last group of the Greek community in Crimea usually have many relatives and friends living in Athens and Thessaloniki, according to the historian.

He also stressed that the Greeks of Crimea hold events aimed at the development of Greek culture, celebrating all Greek national holidays, and study their mother tongue.

It is worth noting that in the self-proclaimed People's Republics of Donetsk and Lugansk in eastern Ukraine, there is also a significant presence of ethnic Greeks.

Similarly, in Granitne, in the bloody ethnic Greek village that occupied the news due to the deaths and injuries of ethnic Greeks that occurred there, lived about 3,500 Greeks.

According to Galanis, now this number is much smaller as many moved from the village at the beginning of the civil conflict in 2014, without finally returning.

In addition, according to the historian, the Greek community is resisting the nationalist Ukrainians, while in particular Granitne had voted in 2014 to secede from Ukraine, something that was not achieved due to its recapture by the Ukrainian army. The historian emphasised that "this is not the first time that Greeks in Donbass have fallen victim to Ukrainian nationalists.

"Other Greek villages were bombed and destroyed by the Ukrainians, while Greeks have been beaten and subjected to torture and humiliation in Ukrainian camps."

Finally, he does not forget the law by Ukrainian President Volomyr Zelensky, according to which Greeks are not considered indigenous to Ukraine.

"The Ukrainian government has forgotten that the Greeks are the oldest people living on Ukrainian soil, so it has not included them in the groups it considers indigenous, committing a historic mistake," he concluded.