Joanna Paliospirou has built a personal relationship with her audience on social media, where she interacts with him, and the most typical example is a series of Instagram stories in which she invited her followers to ask her what they want her to answer.

The answers she gave strengthens the profile of this woman, who after the horrible attack with vitriol became a symbol of power for all of Greece.

Asked if she has had panic attacks, she said no, adding that: "I know people who have experienced it and I know it's bad as an emotion to have."

When asked about her recent surgery, she replied that she was recovering, but added that "I have an open wound that hurts me a lot. I am being patient. I hope it is not too 'difficult' for you. This is my life now."

Of course, she could not help but be asked if she would take off the mask at some point, and she replied: "It will be done soon because I need to share my new image. It is a necessary step in the process of accepting myself and to feel that my life is moving forward. I'm afraid, but I'll face it."

Particularly moving was her answer to the question: "How easily can you trust a person now?" and she confirmed that she has not lost faith in people.

"I can do almost the same as before the attack because I have experienced first hand the humanity, kindness and support of the people around me," she said.

Asked if there was anything she could not do after the accident, she said he had found ways to do everything "except sunbathing."

She accompanied all her answers with snapshots in a park, where she wore a brilliant floral dress by the Greek brand Nidodileda.

See some of the Instagram stories of Joanna Paliospyrou: 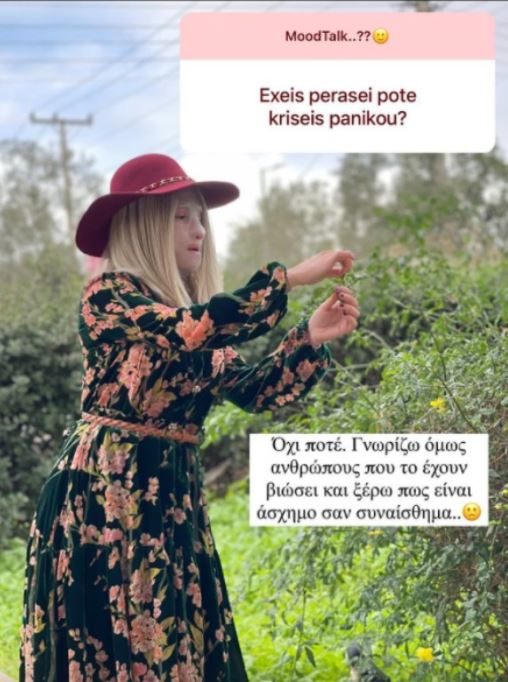 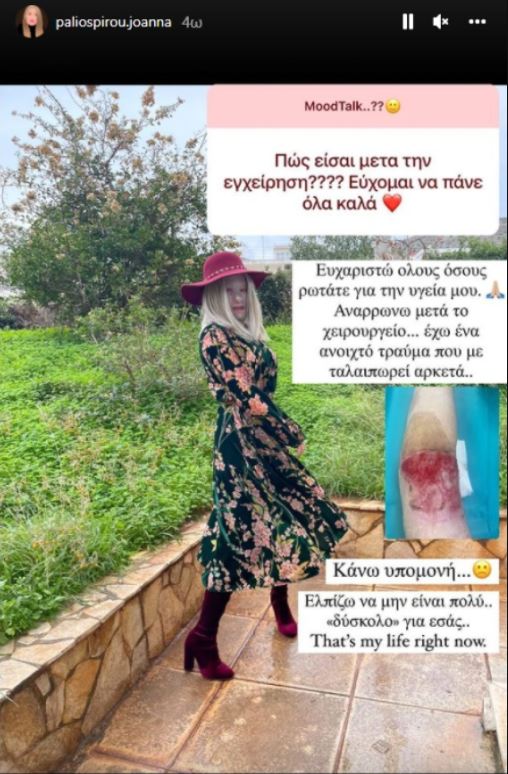 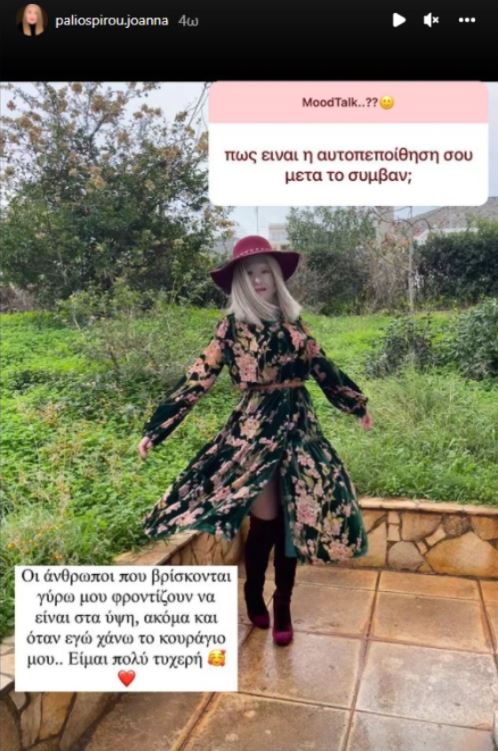 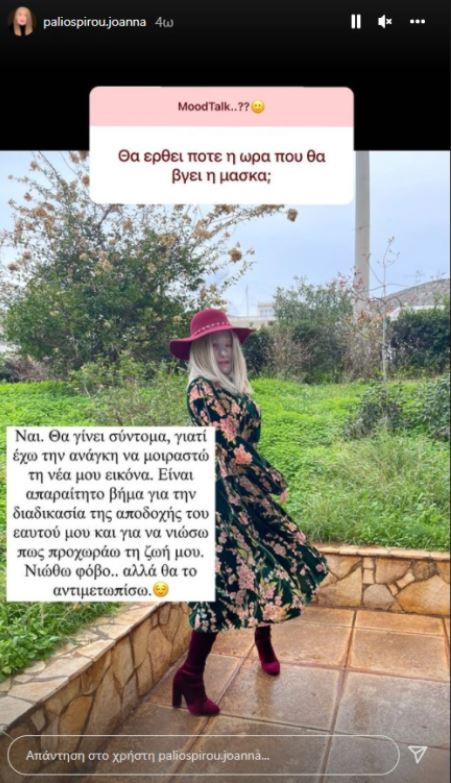 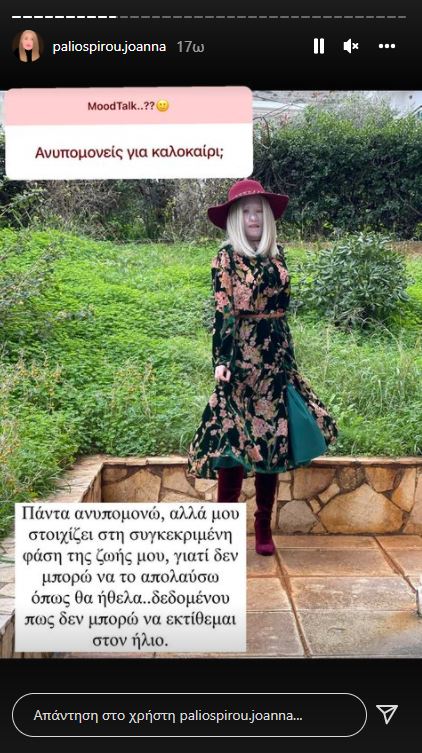 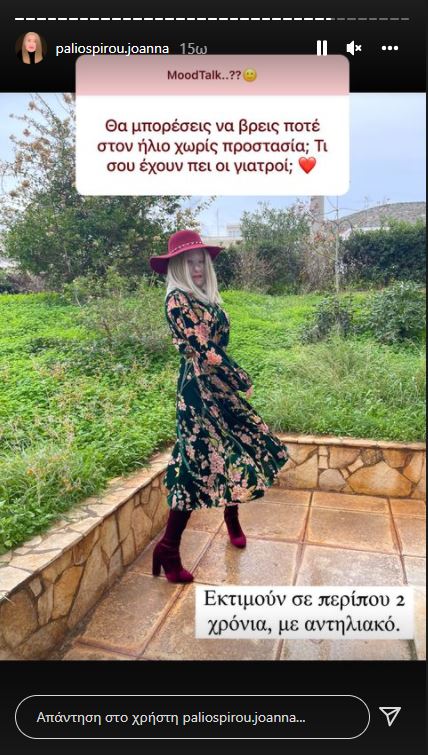 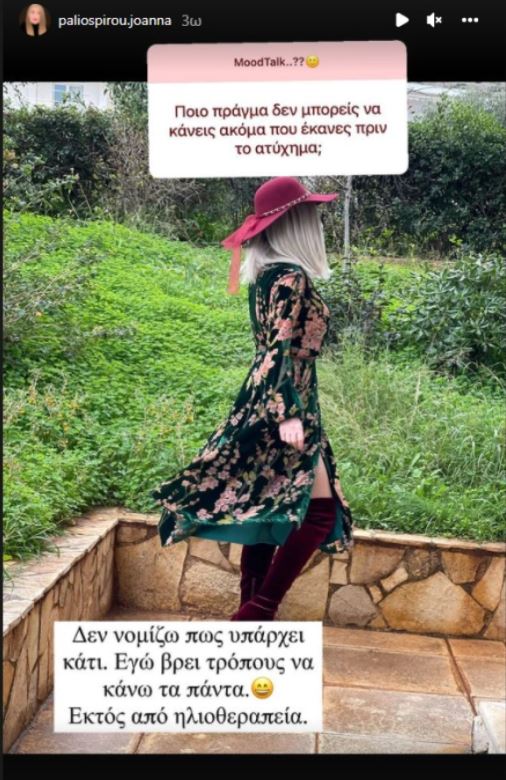 37-year-old Efi Kakarantzoula was sentenced to 15 years in prison in October 2021 for the attempted murder of Joanna with acid in the Athens suburb of Kallithea in May 2020.

At the time, prosecutor Charalambos Mastrantonakis said the attacker executed her criminal plan “in a calculated manner,” adding: “She had vile motives, murderous egoism and moral pettiness.”

He stressed that the type of acid that Efi used and the way she executed her crime “leaves no doubt about her murderous intent.”

“The defendant did not want to ruin the face of Joanna, she ruined her life,” Mastrantonakis continued.

Efi claimed during the trial that she had no intent of killing Paliospirou.

Efi admitted to going to significant lengths to procure vitriol to the survivor’s place of work in an office building, saying she paid a man she met outside a shop in downtown Athens to get it for her.

Joanna's lawyer, Nikos Alexandris, even revealed that the filing of a lawsuit against Efi is imminent, clarifying that “Joanna will give us other reasons to love her.”

“She will not ask for a single euro for herself,” the lawyer said, adding: “Where and how this money will be spent will be revealed in time.”

“This girl is a ‘beacon’ for society, she tries to move on with her life and at the same time offer support to all who have been abused,” Alexandris concluded.

Angelo Tsarouchas is Coming to Australia