Between the hammer and the anvil are the 100,000 Greeks of Ukraine, who are suffering again since after the mutilation they suffered in 2014, and are now called to face the rapid developments that are taking place since Vladimir Putin's speech.

The Russian-Ukrainian crisis has already divided Hellenism into three as the Greeks of Ukraine have a different political position, depending on where they are, and not only.

Many appear willing to defend Ukraine's territorial integrity if requested.

In the Donbass region, which Putin recognised as 'independent' a few hours ago, some Greeks are in favour of joining Russia or in favour of regional autonomy.

Of course, it is completely impossible to know whether these views are expressed under the fear of the pro-Russian separatists.

The Greek element of Ukraine exceeds 100,000 Greeks at the moment.

In particular, in Eastern Ukraine, a visitor sees hundreds of shops and houses with Greek flags - many streets have Greek names.

They have a love for Greece, although many have never visited, it is difficult to describe.

The presence of the Greeks in Ukraine begins in antiquity and continued in Byzantium.

The Greeks founded Mariupol, and gave it the name after the Virgin Mary.

From the 18th century, the Greek element grows in language schools, clubs, theatres and newspapers.

The university has a Chair of Greek Language. At the same time, the Greek villages in the area exceed 40, while the Friendly Society, which will play an important role in the course of the Greek Revolution, was founded in Odessa.

The first blow to the Hellenism of the region came in 1917, with the Bolshevik revolution, while the second was during the Stalin period with thousands of persecutions and executions, especially in 1937-1938.

The recovery of the Greek element began with the fall of the Soviet Union,

Today in the schools, but also in the Greek hospital of the area that serves the villages around Mariupol, there are instructions in case of bombings.

Young people of Greek origin in Mariupol have been facing the threat of war for years, a uncertainty that has devastated the region's economy.

The city hall was leveled in 2014 and remains a ruin that reminds the visitor of the possibility of a generalised conflict between Ukraine and Russia.

In the current emergency situation, many Ukrainian Greeks who immigrated to Ukraine in recent decades have moved further west, as early as 2014.

Many have since been trapped in the autonomous regions or Crimea and have had no choice in the new conditions, while the benefits and higher pensions promised by Putin served as a lure and complacency for the local population.

With the resurgence of the crisis, some company executives and seconded Greek government employees, such as teachers, have returned to Greece in recent weeks, although the number is relatively small.

The vast majority do not intend to move - this happens for a number of reasons.

Initially, many of them have never come to our homeland, especially young people, even though they are of Greek origin. 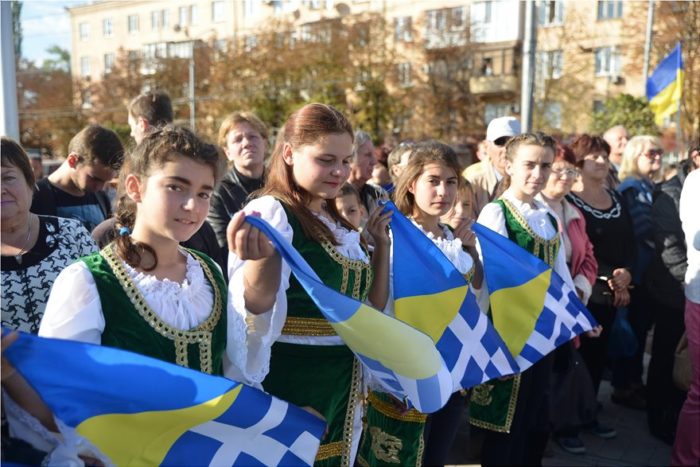 Others do not speak our language and feel insecure as they say.

Most, because there was no need, do not have Greek citizenship or Greek passports, a process that is quite time consuming and requires many months and special examinations.

It is worth emphasising how the vast majority of Greeks have roots in the region for centuries that go beyond even the very establishment of the Greek state.

So, it seems extremely difficult for them to leave their property and their homes in a generalised conflict and they prefer to resort to shelters, rather than come to Greece.

The attitude of the Greek government was lightning fast, after the Minister of Foreign Affairs Nikos Dendias visited the region and stressed in his meeting with his Russian counterpart, the need to preserve the security of the Greek community.

At the same time, special plans have been drafted for the region, while all scenarios for the Hellenism of the region were re-examined.

What has surprised the Greek minority is the fact that Greece is the only country that increases its presence in the region, while other countries have already diplomatically left eastern Ukraine, or even the entire country.

A few days ago, Greece appointed a Consul General in Mariupol, accompanied by our former Ambassador to Ukraine, while increasing the diplomatic staff.

This symbolised the decision of Prime Minister Kyriakos Mitsotakis and Foreign Minister Nikos Dendias to strengthen Greece in the region and solidarity with the Greek community.

While all the others leave, Greece is strengthened and stands by the Greek Diaspora.

* Nikos Theodoropoulos is an economist, Head of Diaspora Affairs for the ruling New Democracy and was recently in Ukraine.

"You are in Greek territorial waters, leave" - ​​The incident between the Hellenic Coast Guard and Turkish fishing boat